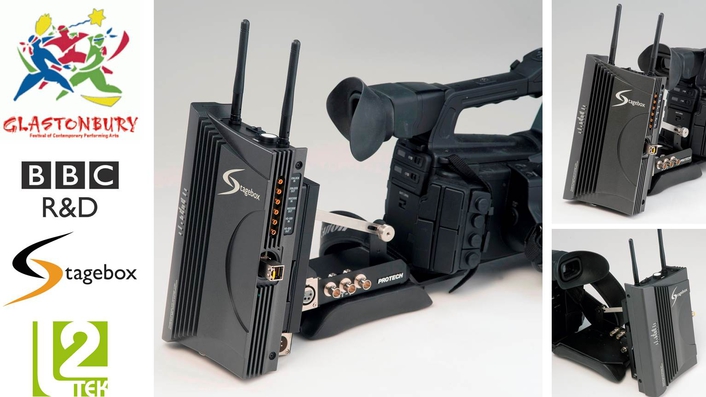 Stagebox high-definition broadcast production technology to be used at the Glastonbury Festival
Broadcast technology developed by BBC R&D and licensable from L2Tek makes significant cost savings and is ideal for outside broadcast events, such as music festivals or major sporting occasions.

L2Tek, a manufacturers’ representative and distributor of components and sub-assemblies for professional video and high-speed communications systems, has today described how the BBC will be using the ground-breaking Stagebox High-Definition (HD) production technology for its upcoming broadcasts from Glastonbury Festival of Contemporary Performing Arts, which is taking place at Worthy Farm, Pilton in Somerset, from 26th - 30th June 2013.

L2Tek is a licensee of the cost-saving Stagebox camera-mounted Internet-Protocol (IP) connectivity device, which was developed by BBC Research and Development. Stagebox is a compact unit that takes HD video and audio from a camera or other SDI source, together with Genlock, timecode, tally, talkback and camera control information, and transmits it over a time-synchronised network using standard IP protocols.

The cost of production and post-production work is dramatically reduced using Stagebox, as the technology uses low-cost Cat6 wiring, switches and routers, rather than using relatively expensive SDI networks. In addition, significant improvements can be made to workflow efficiency to the extent that Stagebox can even be used to realise virtual outside broadcast (OB) productions using multiple cameras controlled remotely from anywhere with an internet connection. For example, it means that the BBC will be able to edit and produce the broadcast video and audio from the various stages at Glastonbury remotely from BBC offices in London, and therefore will only need a considerably smaller team to be actually on site at the event this year, when compared to previous years.

In a Stagebox-enabled production environment, high-quality 100Mbps AVCi programme content is made instantaneously available across a local or wide area network, integrating seamlessly into the post-production workflow in a format that allows direct editing or storage without loss of quality through transcoding.

“StageBox has been described by the BBC as a significant milestone in broadcasting technology”, said Mark Scott-South, Managing Director at L2Tek. “This innovative IP-based technology can bring significant time and cost savings for large outside broadcast operations, and not only of arts-based festivals such as Glastonbury, but also major sporting events and many other important social and cultural occasions.”