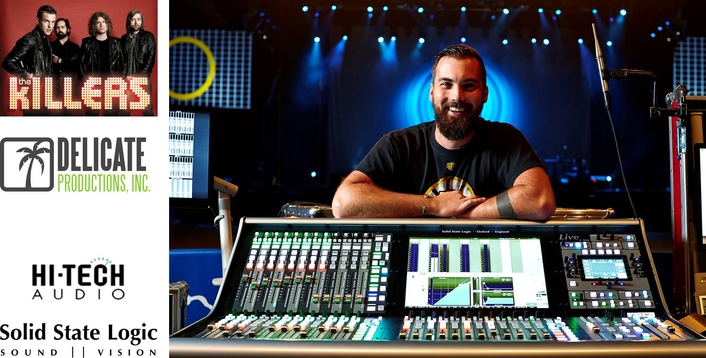 Kenny Kaiser: “This console is the most analogue-correct digital console; it sounds phenomenal”
Following The Killers’ wildly successful 2013 Battle Born world tour, performing in 50 countries and headlining arenas on six continents – including a sold-out Wembley Stadium show for which they wrote The Wembley Song – the Las Vegas-based phenomenon is back on the road this summer in support of their Direct Hits greatest hits compilation. With appearances at North American and U.K. music festivals, the band’s FOH engineer, Kenny Kaiser, is delivering their chart toppers with help from the new SSL Live console.

Kaiser works for Delicate Productions of Camarillo, California, serving as PA tech or system tech for Selena Gomez, Train and as monitor tech and crew chief for The Foo Fighters, among others. After moving to the Killers’ camp last year, he took over the helm for their 2014 tour. However, Kaiser was not fond of their previous FOH console and knew instantly that he’d need to make a switch.

“Delicate is a great partner of Hi-Tech Audio [supplier of the SSL Live console for the tour] in San Francisco, where I’m based,” he says. “Louis Adamo, president of Hi-Tech, called to say they had a new SSL console, so I went down and played with it. I found it fluid and the surface very intuitive. I also had a chance to take a class for engineers and production companies. After I took the class, I found the console even more intriguing. One thing that stuck in my mind was actually taking it apart and looking inside at how it’s made – it’s built like a tank. Plus, with the name SSL, you can’t go wrong; that’s a great name in consoles.”

As Kaiser is part of a new breed of engineers, The Killers’ previous mix platform just wasn’t his style. “There was too much button pushing to get to certain places and it was too spread out,” he continues. “There were fader banks on either side, so I had to do a lot of left and right movements. With Live, it’s more centralized. I don’t have to move around the console and I can stay in one spot, hit one button and quickly do what I need to do.”

Kaiser, who will occasionally use other consoles for events supported by Delicate, finds SSL Live to be more convenient to work on due to its flexibility and the manner in which an engineer can customize the fader banks. “It’s very intuitive and user-friendly,” he adds. “There are a lot of options as to how you can set up SSL Live.”

The accuracy of the console also stood out to Kaiser. “Because my background is a system tech, I’m an audio measurement and phase dork,” he explains. “Some engineers might have an eight or 10 dB boost or cut on an EQ band and my thought, if you have to do that, is that something is wrong – either the wrong mic or the console isn’t doing what the engineer needs. I now find that certain things I used to do, I don’t have to do anymore because the EQ does what it says its doing. When you’re on the first band and you want a cut at 120 Hz, it actually does 120. Some consoles say they’re doing 120, but then when you actually plug it in and check, it’s not quite there. Sometimes the Q isn’t quite what it says; with this console, it’s precise.”

Another big hit was Live’s onboard effects. “Everything is built-in, the reverbs sound glorious and it’s all on board,” says Kaiser.  “I don’t have to go out and buy a console and then say, ‘Okay, now I need some external piece of software or hardware to get what I want.’ Everything I need is right there in one box to make the sound how I need to make it, which makes my job easier.”

But it doesn’t just stop at the effects, the console’s all-pass filters were also a big selling point for Kaiser. “As a system tech, I use all-pass filters to align side hangs to the mains,” he explains. “Being able to have that on inputs to align a pair of kick or snare drum mics is a huge tool to get the phase just right.”

Kaiser also mentions the clarity and distinctness that each instrument has in his mix. “On other consoles, once you start adding more stuff, you hear them start to overload and hear the coherence start to go away, but not with the SSL Live. SSL definitely did their homework to make it sound as analogue as possible. This console is the most analogue-correct digital console I’ve ever encountered. It sounds phenomenal.”

The Killers recently headlined the Hangout Festival on the sandy beaches of Gulf Shores, Alabama where the console was put to the true test of the weather. Kaiser notes, “despite the heat, high humidity, wind and sandstorms that we encountered that weekend, the console was just great.”