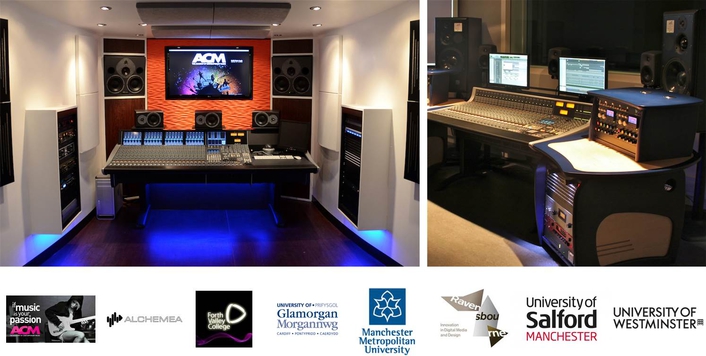 .
“We always felt that SSL was the leading brand in the commercial recording industry, so we wanted our students to use the best equipment available to prepare them for the real world”

RECENT INSTALLATIONS INCLUDE:
University of Glamorgan, Pontypridd, Wales, UK
The University of Glamorgan is a higher education establishment with a mission to prepare students for life in the music industry through the completion of three year and Masters degree programs. With the focus on production, engineering and sound design, the SSL Duality was a huge step for Glamorgan to give students industry standard equipment at the very top end of the scale on which to learn, practice, and record.

“The Duality is simple to understand, yet its powerful and flexible nature means it is the perfect tool for students beginning their journey into the music sector,” says Simon Cullen, Senior Technical Officer for Glamorgan. “We always felt that SSL was the leading brand in the commercial recording industry, so we wanted our students to use the best equipment available to prepare them for the real world.”

“Duality is the best technology out there, it’s the latest kit and that is what we need for our new studio,” says Antony Greaves, head of audio production for the Academy of Contemporary Music. “Duality is a combination of traditional analogue signal flow with DAW control, so we can offer all aspects of modern recording from one room. Because of Duality’s analogue roots, we can teach the fundamentals of signal routing and that knowledge will apply to any console in the world, helping our students gain employment.”

University of Westminster, Northwick Park, Middlesex, UK
The coursework at the University of Westminster has been designed to meet the ever-increasing demand for high-quality practical and vocational training at a higher education level, to develop skills both as creative music makers and as music industry business entrepreneurs. The university offers both AWS 948 and Duality consoles as advanced teaching tools.

“The Duality and AWS are used in many aspects of teaching from demonstrating audio production techniques through to surround sound mixing for post production,” says Colm O’Rourke, studio manager for the University of Westminster. “SSL’s signature sound quality, industry standard design and reputation heavily influenced the decision to purchase both consoles. SSL offers the best consoles on the market to teach audio production.”

Alchemea College, London
Alchemea College is one of the world’s leading creative media training colleges, specialising in full-time and short audio engineering, music production, live sound and video courses. The aim of the audio program is to give students a wide variety of skills to go out into the real world and be prepared for the different needs and challenges they will face.

“Looking at the current available analogue consoles, Duality has really got the most exciting and advanced implementation of DAW control over any other console,” says Neil Pickles, director of short courses for Alchemea. “The other thing about the SSL brand is that I don’t think they are going to stop building analogue consoles anytime soon. We have a long and successful history with our G Series and we believe Duality will last us well into the future.”

“I have always been aware of the SSL sound and its legacy,” says Dr. Jason Woolley, program leader for creative music production for MMU. “I was particularly interested in the AWS because of its analog capabilities, the SSL sound, and the classic EQ types. Having the integration into modern day software like Pro Tools® and Logic, which are an essential part of what we deliver here, was also invaluable.”

Forth Valley College, Stirling Campus, Stirling, Scotland
Forth Valley College provides courses that offer a focused foundation in the current techniques used in modern music making and sound production. Practical “hands-on” recording, sequencing and mixing workshops are supported by sessions on communication, business skills and the working of the creative industries.

“We have two main studios in the building, both of which are equipped with an SSL AWS 924 console,” says Colin McGeoch, lecturer in sound production for Forth Valley College. “As a teaching tool, the AWS is fantastic. The students find their way around it really easily and they’re finding the DAW control very intuitive. They also gain an appreciation for the crystal clear sound quality, analogue mixing capabilities and the ability to do things like switch between the E series and G series EQ to make some comparisons. The AWS is a top professional production console and an excellent teaching tool.”

“The University of Salford’s MediaCityUK campus was created to host our media production, graphic, animation and video game departments, among others, as part of the very exciting MediaCityUK project,” says Ash Tidball, TV studio manager for the University at MediaCityUK. “For our Studio A Sound control room, we needed a console that was very flexible and could be set up very quickly for the different types of shows produced. We chose the SSL C10 because it offered us the best feature set and sonic performance for all our production needs. For example, the snapshot recall of program settings greatly increased our teaching capabilities, as a push of a button gets the console ready for each succeeding class in an instant.”

“The C10 had to fill many missions for this installation and it has performed flawlessly,” says Michael Davidson, subject leader, Foundation Degree, Broadcast Operations for Ravensbourne. “We wanted a dedicated digital broadcast console that was easy to use for both beginner and advanced students, was cost-effective to purchase and operate, and would satisfy the needs of our commercial clients. The C10 was the best choice for this mission.”