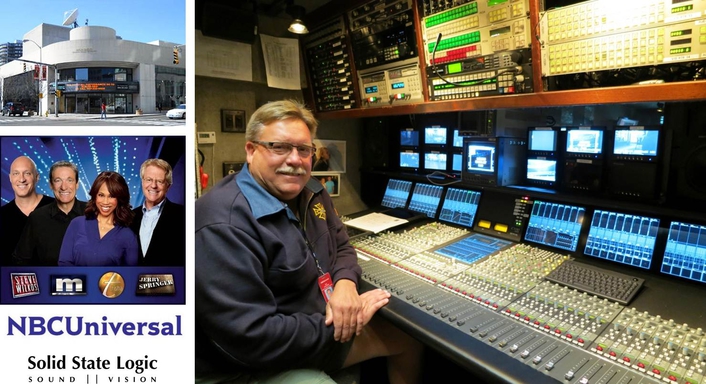 Rob Alexander: “The C100 gives us the power to do what we need to do very efficiently.”
The Stamford Media Center, a wholly owned subsidiary of NBCUniversal, recently installed a Solid State Logic C100 HDS Digital Broadcast Console in its unique audio/video control room, replacing an analogue console. Used to handle the audio for The Jerry Springer Show, Maury, Trisha Goddard and The Steve Wilkos Show, the C100 HDS provides plenty of console power in a compact control room. SSL’s reputation for excellent service combined with an industry-standard user interface helped make the C100 HDS the perfect choice for this application.

“The Stamford Media Center is a re-design of a legitimate theater where the main studio room, backstage rooms and offices encompass the entire building, while the video and audio tech core are built into a permanently parked OB van,” says John T. Chow, manager of technology and digital media for Stamford Media Center. “We had installation limitations that were met by the C100 without compromising on console features and power. Additionally, support has always been great with SSL as far as responsiveness and knowledgeable people helping out. This is an important factor for keeping these boards going. Getting a great console at a good price is only half the equation. Getting ongoing support after the fact is paramount. SSL and the C100 solve this problem.”

The studio runs a packed schedule, producing 20 shows a week between the four titles. All four productions feature a host, guests and a live audience of approximately 200. The main differences between the shows, from a mixing point of view, deal with backstage feeds to guests and producers, as each show has its own needs in terms of types of guests including stars, just plain folk or guests from a particular group or organization What they see and hear backstage will vary greatly depending on the program.

“The console has performed extremely well,” says Rob Alexander, senior audio engineer for Stamford Media Center. “The console is laid out so that if you know how to operate an analogue console, the transition to the digital console is really straightforward. This familiar interface is a part of the legacy of an SSL product. I am able to customize the console to be able to turn my backstage feeds on and off very easily or work the mic trims without having to call up menus. I can also store my settings for instant recall. This really speeds up the workflow.”

For an audio control room built into a truck, console size was a consideration for this installation that includes redundant Blackrock Processing Cores, three Alpha-Link LIVE-R units, and a MORSE Stagebox – Modular Remote I/O. These extra elements neatly reside in the control room in one rack next to the console, solving the space dilemma presented by an OB truck.

“There is no rehearsal for any of the shows we produce here, so having a console that allows us to make changes while we are working on a show is a big advantage,” concludes Alexander. “We go into each production with the confidence we can easily handle the different types of guests. Some are very loud and emotional and others hushed and quiet and every level in between. If a setting basically works, I can instantly copy that making the entire audio chore straightforward.  The C100 gives us the power to do what we need to do very efficiently.”