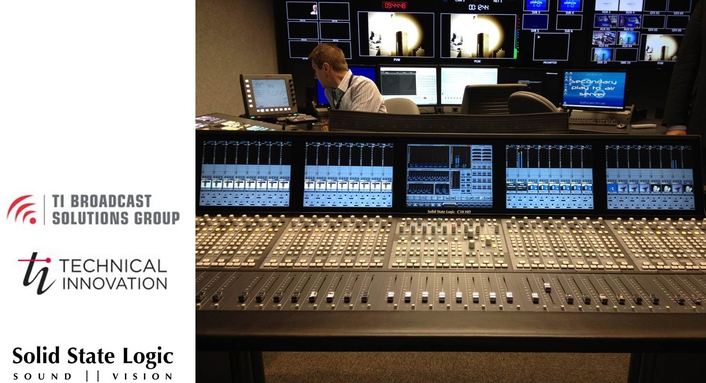 The C10 was chosen for its powerful, yet familiar user interface, industry leading I/O options and the Dialogue Automix production assistant feature. SSL’s reputation for developing highly-functional and reliable, great-sounding consoles for use with live news programming was also a consideration.

“This is the first time we directly specified an SSL console, and the results from the first control room we completed are very satisfying,” says Michael Wright, President of TI Broadcast Solutions Group. “The C10 has performed flawlessly, and that is a must for high energy broadcast news operations. Our design philosophy is based on a rigid set of rules, practices and checks and balances that yield superior, reliable and repeatable results, taking the worry out of the design and implementation of a new facility. When we specify a system, it must always work the first time. Our experience with the SSL C10 console certainly supports our philosophy.”

The first station to reach completion was a 10,000 square-foot facility with a studio and a control room, which was built for the second-largest Spanish-language content producer in the world. The second facility, a 150,000 square-foot space with five studios and three control rooms, will be completed during 2013 and will serve the Dallas/Fort Worth Metroplex area for a major national broadcaster. In each of these cases, TI Broadcast Solutions Group followed its disciplined design process, compared all the major broadcast console manufacturers and landed on the C10 HD for all four control rooms.

“First of all, we felt that the overall architecture of SSL’s I/O was superior to anything else out there,” continues Wright. “SSL gave us the ability to get the I/O centralized and in the format that we needed, whether that was SDI or MADI inputs, analog or digital. It also provided all the scalable I/O that our clients needed, the way they needed it. Also, the look and feel of the C10 was just right, from the touch screens and the large channel displays to the layout of the buttons, down to the size of the lettering. The user interface was superior in the case of the C10.”

The features that sealed the deal for all four consoles were SSL’s powerful production assistant options. Each console sports the Dialogue Automix and Production Automation options, while the single studio additionally features the C-Play option. Dialogue Automix, however, was the star of the group.

“The Dialogue Automix option is a standout feature of the SSL product,” concludes Wright. “These stations deal with fast-paced, panel-based programming, and the Dialogue Automix really streamlines the workflow. Even with a lot of open mics, the system tames the process with superior results. From the design power and flexibility of the C10 to working with SSL as a company, the entire experience has been grand. The company has been a great partner in supporting our efforts during both sales and ongoing implementation, and that is very important to the success of both projects.”