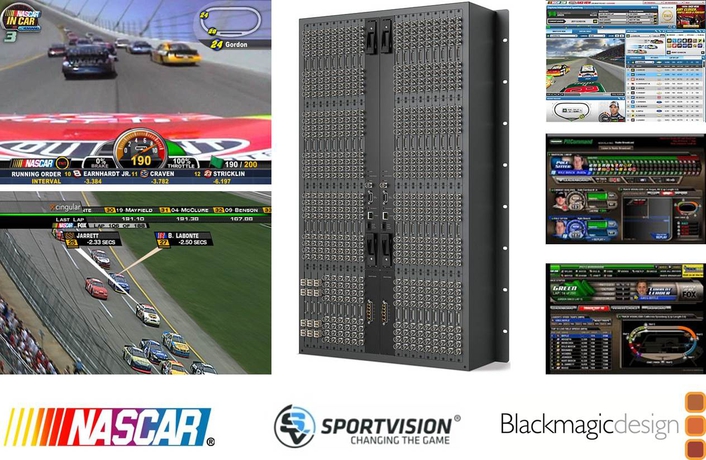 Sportvision’s RACE f/x System, the most advanced tracking technology created for televised sports, is used during NASCAR races.  The RACEf/x System, which tracks cars at speeds exceeding 200 MPH, creates a complete digital record of a NASCAR race in real time, delivering a wide range of visual effects for television, such as pointers, telemetry and bubbles and arrows.  The system provides viewers get car performance data, including acceleration, braking, lap position, speed and RPMs, in real time.

With each NASCAR race, Sportvision provides video feeds to network partners throughout each live race.  The Sportvision broadcast truck is located downstream in the broadcast process, with RACEf/x graphics added directly in the trailer and the final product played out live.  To support this broadcast infrastructure, Sportvision has installed a Universal Videohub 288 router in its broadcast truck on site.

One of the primary responsibilities of the Universal Videohub 288s is to allow Sportvision to manage the multiple feeds required by each respective network.  Broadcast right holders use different formats; some networks require 720p, while others need 1080i.  The Universal Videohub allows Sportvision to interface with both formats in a single router, offering a single routing solution that eliminates the confusion that would come from managing multiple routers to handle each format.

Built around a modular design and small form factor that allows Sportvision to easily scale up or down to fit the needs of each race and easily fit into the tight spaces of the broadcast truck, Universal Videohub supports between 20 and 40 feeds coming in and out of the Sportvision broadcast truck from 25 computers and several video and audio jack fields.

“It is imperative that the routing infrastructure to support RACEf/x packages is reliable, efficient and scalable to handle any and all formats.  Moreover, with space on site at a premium, any router has to be small enough to fit amongst all the other gear in a 53 foot trailer,” said Jason Stromberg, technical operations manager, Motorsports, Sportvision.  “As the final link before the viewer sees the footage, we don’t ever want feeds or graphics to be delayed or omitted because of a faulty router.  That’s why we count on the Universal Videohub.  It has been an extremely reliable asset in ensuring the success of the overall Sportvision production that we execute on behalf of NASCAR and our network partners.”

About Universal Videohub
The Universal Videohub family consists of two fully customizable card based routers designed for the high end post production and broadcast industries. Universal Videohub is available in two models, a 72 x 72 and a 288 x 288 capacity size with the ability for customers to add a combination of SDI and optical fiber interface cards to fully customize their router. Universal Videohub 288 model also supports hot swap redundant cross points and power supplies, so in the case of a fault, switch over is fully automatic for 24/7 reliability. Universal Videohub also includes powerful features such as SD, HD and 3 Gb/s auto switching, built in deck control ports and ethernet and serial router control with a wide range of Mac and PC software and hardware control panels.