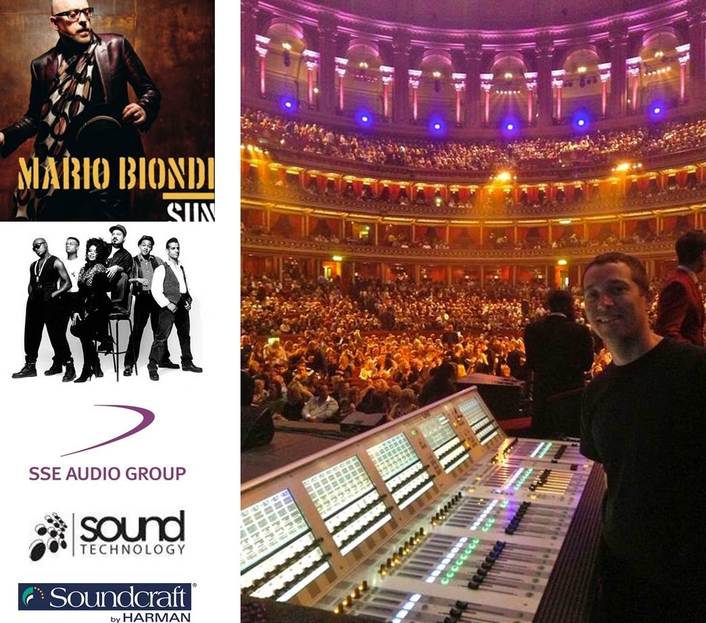 With a capacity of over 5,500, the Royal Albert Hall hosts more than 350 events year round including classical, rock and pop concerts, ballets, operas, and much more. With 18 supporting musicians onstage, plus four guest appearances, Biondi performed the entire album SUN together with his greatest hits. “With a show such as this, I needed a console that could handle a large number of inputs and outputs and which would also give me flexibility and speed with minimal pre-production,” said Robin Leggett, Monitor Engineer for Incognito. “With 28 mixes onstage I needed to be able to access functions quickly, but having worked with Soundcraft’s Vi6 previously, I knew it would do the job.”

Chris Lewis, FOH Engineer for Incognito and who handled the FOH mixing for the Mario Biondi concert, has also enjoyed working with Vi6 consoles for several years. “I’ve used the Vi6 many times and it’s built solid, like Studer consoles,” Lewis said. “I really like the user interface and for a gig like this the user layer is really beneficial, I can get where I need very quickly and easily. We had 56 channels of audio, so I edited a user layer so that I could have every channel I needed to adjust on one layer; very useful.”

Royal Albert Hall was specifically designed to host unamplified productions, “The space is very reverberant,” stated Leggett. This made mixing for Biondi’s concert challenging. “Keeping the onstage levels under control is more of a challenge in this kind of venue, but fortunately the level of consistency we received from the band and guest musicians was excellent.”

“I was able to program the desk during rehearsals the previous few days before the show and I already have a Vi6 setup for Incognito concerts, so I was able to use our base setup and build on top of that for this concert,” Lewis added.

“With the Vi6s, the show was a real success,” Leggett concluded. “I find that with this console I don’t have to dig around when I’m mixing. Its intuitive functionality is ideal for demanding shows, especially when I’m under time pressure.”

Soundcraft is distributed in the UK/ROI by Sound Technology Ltd.