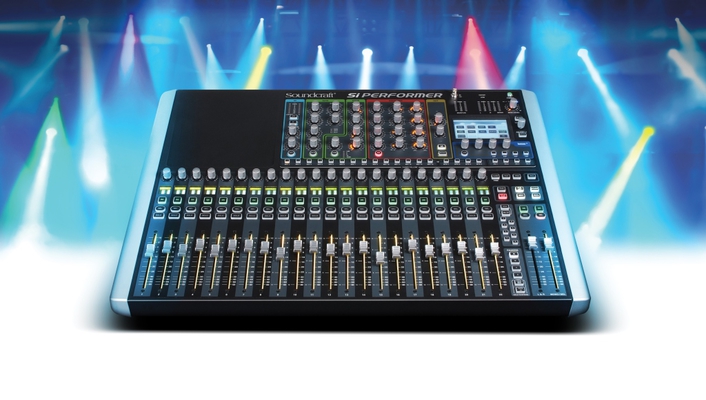 The Only Audio Console With Integrated DMX: Lighting control adds massive value to new small-format console range
It takes something completely different to make a digital audio console stand out from the crowd these days, but Harman’s Soundcraft has done exactly that with the launch of the Soundcraft® Si Performer range of mixers, which, thanks to the integrated DMX functionality, adds lighting control options to an already impressive and powerful audio feature set.

The Si Performer builds upon the successful Si Compact range to which it bears a likeness, providing almost twice as much DSP power and increased functionality, with an input capacity of 80 inputs to mix on all models. The built-in I/O does not disappoint: Si Performer 2 with 24 mic and eight line inputs, and the Si Performer 3 with 32 mic and eight line inputs, plus the four FX return channels. The provision of two option card slots allows I/O expansion via any of the Soundcraft stageboxes and option cards from the Soundcraft® ViSi Connect range, giving the possibility of patching up to 80 inputs to mix, or from CobraNet, AVIOM or AES inputs via the appropriate cards.

The unique integration of a DMX512 port offers core lighting control. The first release of software provides four scene masters (A-D) with associated slave channels on the ALT fader layers, individual colour intensities or parameters are set on the slave faders with an overall master level fader, which itself may be assigned to any of the main fader layers for simultaneous access to audio and lighting levels. To automate the process, DMX settings may be stored alongside audio settings in the snapshot system, so both may be recalled automatically by a single button press or via an external MIDI command. With selective isolation, snapshots with just audio or lighting parameter changes may be recalled.

A feature-packed audio console with fully-parametric 4-band EQ as standard on all input channels, and as usual on Soundcraft’s digital range, BSS graphic EQs on all bus outputs. This is in addition to the already standard filters, gates, compressors and delays on all inputs, compressors and delays on all outputs, which when calculated delivers the equivalent of over 220 rack units of processing in a tiny footprint. Unlike many other digital consoles at this price point, all this processing is fully available all of the time, there are no compromises on the amount of DSP in use.

Fourteen mixes may be configured in various combinations of mono and stereo to a total of 20 mix busses; great for mixing in-ears and wedges in a monitor situation. These busses are supplemented by four stereo matrix mixes, four dedicated FX busses, and three master Mix busses which offer true LCR mode mixing make the buss structure immensely powerful.

Users will be delighted by the addition of eight VCA Groups and eight mute groups, which now start to show the absolute power of this new console from the Soundcraft stable. 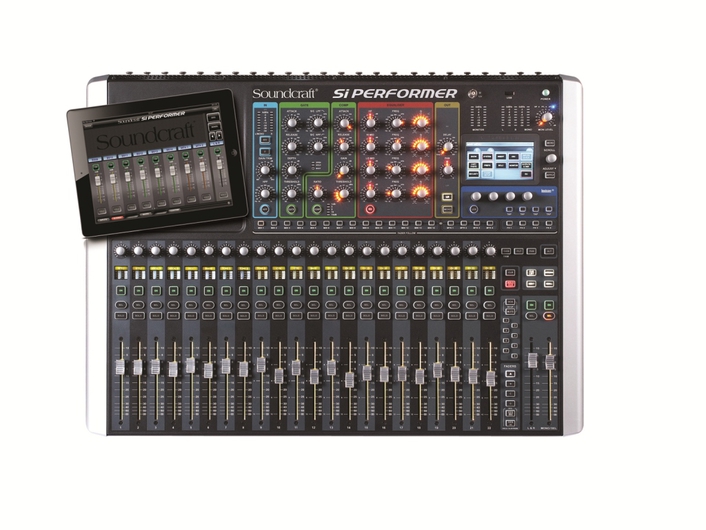 HARMANN designs, manufactures and markets a wide range of audio and infotainment solutions for the automotive, consumer and professional markets – supported by 15 leading brands, including AKG, Harman Kardon, Infinity, JBL, Lexicon and Mark Levinson. The company is admired by audiophiles across multiple generations and supports leading professional entertainers and the venues where they perform. More than 20 million automobiles on the road today are equipped with HARMAN audio and infotainment systems. HARMAN has a workforce of about 13,400 people across the Americas, Europe and Asia, and reported sales of $4.4 billion for the fiscal year ended June 30, 2012.