Sound Devices for Game of Thrones 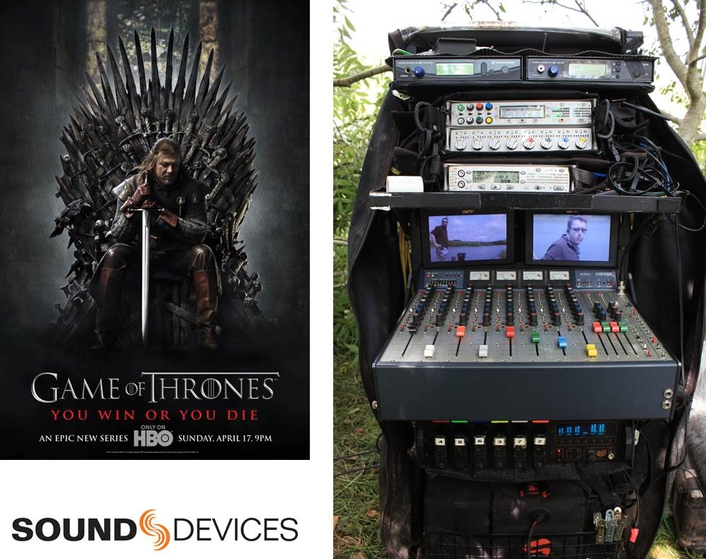 Sound Devices is a Staple in Ronan Hill’s Production Sound Rigs
Emmy-nominated Production Sound Mixer Ronan Hill, currently on set for the third season of HBO’s Game of Thrones, has once again tapped digital audio recorders from Sound Devices to help record dialogue and ambiance for the fast-paced dramatic series. The company’s 788T recorder has become a mainstay in his cart-based and portable sound rigs.

Game of Thrones, a medieval fantasy television series created for HBO by David Benioff and D. B. Weiss, is an adaptation of A Song of Ice and Fire, George R. R. Martin's series of fantasy novels chronicling the violent dynastic struggles among several noble families for control of the Iron Throne. With a character count of more than 300, a typical Game of Thrones scene can have more than 10 principal characters speaking. In order to keep ADR to a minimum, Hill is tasked with capturing all the dialogue on location as well as recording ambiance.

A loyal customer of Sound Devices, Hill first used a 744T recorder for the feature films Kings and Hunger, which earned IFTAs (Irish Film and Television Award) for Best Sound. He also used the 744T to record Five Minutes of Heaven and The Eclipse, which also garnered IFTA nominations.

Hill used Sound Devices 788T on the first season of Game of Thrones, which won CAS and IFTA nominations for Best Sound. At the start of season two, Hill invested in a Sound Devices 788T-SSD, which became his main recorder on the cart, with the 744T used as a cart-based, two-channel backup. His original 788T became his dedicated portable run-and-gun recorder and is fitted with a Sound Devices CL-8 mixing controller. It is always on stand-by for when Hill is on-location. 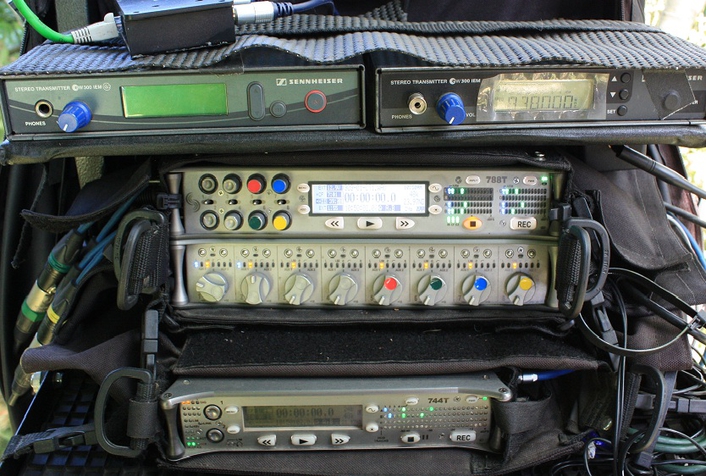 Hill’s rig consists of Sennheiser MKH 60s and an MKH 70 outside and mostly MKH 50s for interiors. The show, primarily shot in Northern Ireland, takes place in a lot of remote and hard-to-reach locations. Through his tenure on the series, Hill has encountered all environmental conditions; including extreme cold in season one and a hurricane in season two. On many of these on-location shoots he relies on Audio Ltd. radio mics and DPA 4071 lavalier mics to provide isolation from the environmental conditions. Hill also uses Audio Ltd. 2040 radio mics with an RK6 (six-channel radio rack) on his cart and one or two RK3s (three-channel radio racks) in his portable setup, so he can quickly go from cart to portable.

The cart-based 788T-SSD is also fitted with a Sound Devices CL-8, which allows inputs one and two (the boom and lav mix) to be mixed to the left channel to produce a production mix for editorial and dailies. No audio is recorded at the camera. Hill also has a Sound Devices CL-WIFI, which is very useful for track-naming, among other benefits.

“I have always found the Sound Devices recorders to be very flexible, reliable and user friendly, but most of all they sound fantastic,” says Hill. “They get used in all conditions and always perform well. I can’t wait to hear what they come up with next.”

Sound Devices CL-8 is a powerful mixing control surface for its 788T recorder. Its large rotary faders and push buttons bring extensive mixer-type control to 788T inputs. The lightweight CL-8 can be used either mounted or remote from the 788T. The Sound Devices CL-WIFI allows users to control the already powerful 788T from anywhere on set. CL-WIFI works together with its companion iOS software app to allow iPads, iPhones and iPod Touches to control a connected 788T. The CL-WIFI turns an iOS device into a simple, portable control surface, enabling a sound mixer to move around on set, away from the sound cart, while still retaining extensive control and monitoring of the 788T recording system.