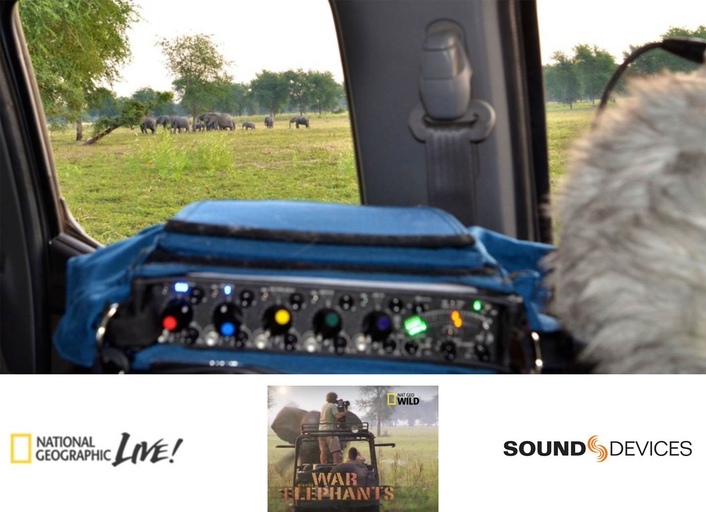 Production Mixer Proves Reliable in Africa’s Extreme Temperature and Terrain
When Sound Engineer David Ruddick was presented with the challenge of finding portable audio gear that would hold up in the rugged terrain and extreme climate of Mozambique's Gorongosa National Park for an upcoming National Geographic elephant documentary, he turned to Sound Devices’ 552 Production Mixer.

In order to record audio for “War Elephants,” which aired this month, Ruddick joined Dr. Joyce Poole, an elephant behavior expert, and her brother Bob Poole, a wildlife cameraman for National Geographic, to help re-establish safe tourism in the park now that the country’s civil war has ended and ivory poaching has been recently abated.

For the documentary, Bob Poole rebuilt a Land Rover and made an “elephant proof roll cage” to help prove he and his sister's theory, that the Gorongosa elephants could learn that not all humans in vehicles visiting the park are bad. The theory was that when a vehicle encounters a group of elephants, instead of driving away or honking a horn or screaming in fear as an elephant charges, you hold your ground and try to stay calm. When the elephants learn that the vehicle and people inside are not a threat or out to do any harm, they will go about the business of being elephants, and not chasing safari tourists every time they see them. The theory worked, but there were a lot of tense moments and close calls involved in proving it.

When Ruddick arrived on location he found out that he would not be able to ride in the elephant-proof Land Rover. Instead, he would drive a second vehicle that would follow the Land Rover. Ruddick set up the 552 in the passenger seat with two shark fin antennas attached to the wireless receivers and had transmitters on Joyce and Bob and plant mics in the car. The mix was then sent to the camera via a wireless link.

“The film presented many obstacles for recording great dialog,” says Ridduck.  “Relying on wireless transmission from the hero car to my vehicle and also sending a stereo mix to the camera, and driving at the same time could get very challenging.  When we were filming elephants, we had to position the sound vehicle in just the right place to have good wireless range and be out of the shot, and leaving an escape route for the vehicle just in case we met a rogue elephant who wanted to smash the sound vehicle. I had a lot going on but having the 552 riding shotgun next to me made mixing and recording second nature.  The 552 is built like a tank, sounds great and is always reliable in demanding situations, it didn’t miss a take.”

Another challenge Ruddick faced was Mozambique’s extreme temperatures and terrain. “This was one of those jobs where sound equipment took a beating,” adds Ruddick. “We drove over 1500 kilometers on incredibly bumpy 4X4 roads, as well as driving down elephant paths so anything that was not well made (including cars) fell apart. Temperatures were hot and dust was always a problem. The one piece of gear I could always count on was the 552. It never flinched.”

Sound Devices’ 552 Production Mixer is the most technologically advanced portable audio mixer made. Using the best analog and digital technologies, along with advanced mechanical construction, the 552 gives professionals a superb sounding, compact, lightweight and power-efficient mixer that is equally at home in simple run-and-gun applications or in complex multi-input, multi-output production setups. 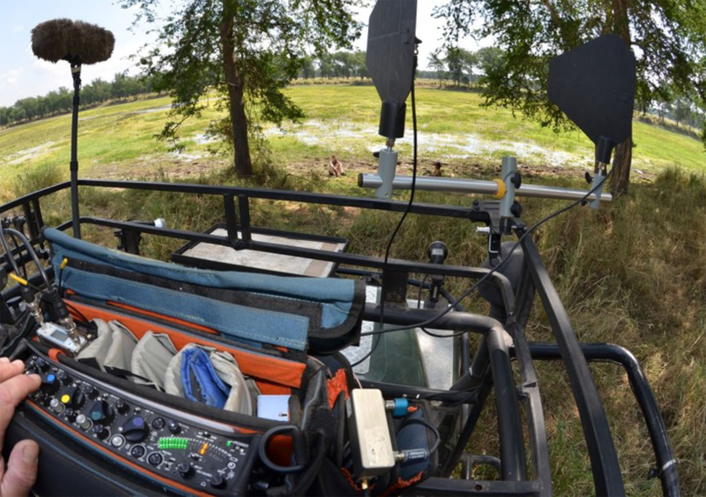 The 552 has an integrated two-track, digital audio recorder writing industry-standard Broadcast Wave files to SD and SDHC media. A simple joystick controller is used to take command of recording functions. Either WAV or MP3 files can be recorded. Recordings can be either 24 or 16 bit, with WAV files having sampling rates from 44.1 kHz up to 96 kHz.

With its three sets of balanced master outputs (plus numerous unbalanced connections), the 552 provides complete connectivity for multi-camera and complex production setups. Additionally, a digital output option is available for either the XLR connectors or the 10-pin multi-pin outputs. When selected in the Setup Menu, the master XLR outputs can output four channels of 24-bit (or 16-bit) AES/EBU signals, the source of which is selected in the Setup Menu.

The 552, like all Sound Devices professional audio products, are designed to withstand the physical and environmental extremes of field production. The 552 uses molded, metalized carbon fiber top and bottom chassis panels for increased durability and weight reduction. Additionally, its front panel is gasketed for improved resistance to moisture.

“There are many great features and qualities of the 552, but I really was impressed with just how fantastic it sounds,” says Ruddick. “Being able to record nice clean ambient sound directly on the 552 was very liberating. Having a perfect back-up recording to synch dialog when things went wrong (and they went very wrong more than once) changed my whole outlook on direct-to-camera wireless recording. The director on this shoot was adamant that he wanted my best mix recorded to camera. I did what he asked but boy was I glad I had the back-up recordings when I found out that the wireless link had issues (broken cables and bumped levels, etc.). The National Geographic elephant shoot in Mozambique was a success. The Sound Devices team created an incredible piece of equipment. The 552 is amazing—in the world of documentary sound, it has no equal.”