Sound Devices at the 2012 NAB Show

Based on Sound Devices’ field-proven PIX 220 and PIX 240 recorders, the rack-mounted PIX 260 is a file-based video/audio recorder/player that seamlessly replaces tape-based video decks in production and post-production environments.

Using the Apple ProRes or Avid DNxHD codecs, the PIX 260 records and plays files up to 220 Mbps in high-quality 10-bit 4:2:2 video as well as 32 tracks of 48 kHz audio. Files from the PIX 260 are ready for direct import into Avid and Final Cut editing environments, eliminating time-consuming transferring and transcoding. Files can also play out of the PIX 260 for realtime applications.

The PIX 260 has a built-in five-inch 800 x 480-pixel video display that allows users to view video and setup-menu selections. With its extensive control capabilities, the PIX 260 is a flexible video playback source that is compatible with Final Cut Pro 7, Final Cut Pro X and Avid sessions. The PIX 260 can be controlled by both external RS-422 and via Ethernet through the embedded Web server, allowing for machine transport control over Ethernet-based networks. 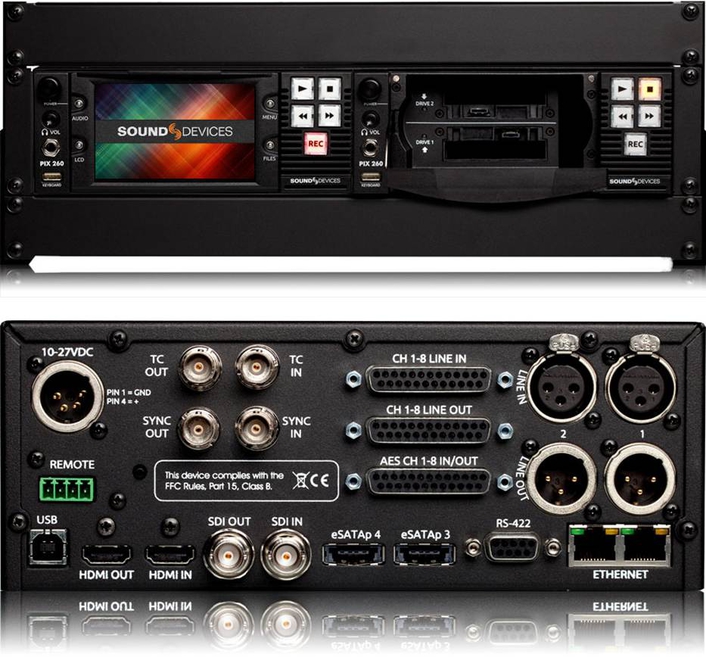 The PIX 260 includes a built-in Ambient Clockit time-code generator/reader with genlock output for multi-camera and double-system sound applications. In addition to generating ultra-stable time-code, time-code can be read from the SDI stream, the HDMI stream or from an external source.

Like the PIX 220 and PIX 240, the PIX 260 includes a sophisticated scaler and frame rate converter. Regardless of the incoming signal, the PIX recorders can record the signal after up, down or cross-conversion at the same rate or a different rate. Hardware-based 3:2 pull-down removal is included as well.PIX 260’s convenient 1/2-rack, 2U chassis dimension allows it to be easily integrated into any existing environment. It is powered by 10-27 VDC through its four-pin XLR connector.

NEXT-GENERATION FUNCTIONALITY FOR PIX 240
Sound Devices PIX 240 firmware Version 2 now enables users to monitor images in varying exposures through Exposure Assist, a feature that allows for false-color and zebra-stripes viewing. It is also equipped with Focus Assist, which includes a peaking filter and 1:1 pixel zoom. Monitor brightness, contrast and chroma adjustments are also now available. Version 2 of PIX 240 also includes standard definition recording (NTSC and PAL) and support for using simultaneous analog and SDI/HDMI audio inputs. These new features are available as a free firmware update to all PIX 240 users and can be downloaded by visiting http://www.sounddevices.com/download/pix-firmware.htm.

“Our new PIX line of audio/video recorders have received overwhelming support and interest from the industry as a whole,” says Jon Tatooles, managing director at Sound Devices. “We have listened to our customers’ needs and requests and are excited to officially launch Version 2 of PIX 240 at this year’s NAB show.”

PIX 240 is the perfect companion to a wide range of professional cameras used for feature films such as ARRI and RED as well as small-format HD cameras from Sony and Canon. PIX 240 connects to cameras with HDMI or SDI and records directly to QuickTime using Apple’s ProRes or Avid’s DNxHD codec. Since PIX recorders use Apple ProRes and Avid DNxHD, files recorded in the field can be used directly in post production, making the workflow simple and fast. PIX 240 includes a built-in Ambient Clockit time-code generator/reader with genlock output for multi-camera and double-system sound applications. The source time-code can be derived from the SDI stream, from an external source or from the built-in generator in PIX 240. Additional features include digital audio inputs on AES3 and an external eSATAp connection for direct connection to large SATA drives.

The PIX-CADDY, which is used to connect SSD volumes to all PIX recorders, is an SSD mounting accessory that also operates as a multi-format interface to attach the SSD to a computer for file transfer and management. With the introduction of the PIX-DOCK, users can now leverage Thunderbolt’s fast transfer speeds between drives and computers. Thunderbolt offers up to 10 Gbps interconnection speeds, making the file copying of large-capacity drives fast and easy. When using fast storage drives, its high throughput allows realtime playback of multiple streams of high-data-rate video. 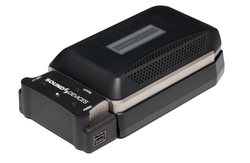 The PIX-DOCK provides both power and data over a single cable and is compatible with SATA drives. PIX-DOCK includes a six-foot Thunderbolt cable that connects to the PIX-CADDY using its eSATAp connection. It also offers a secure, latching connection to PIX-CADDY, and its weighted base prevents sliding on desktop surfaces.

“PIX-DOCK simplifies and speeds the transfer and management of files when using our PIX recorders,” says Jon Tatooles, managing director at Sound Devices. “By utilizing Thunderbolt, we are able provide our users with blazing fast and reliable transfers.”

The PIX 220, PIX 240 and PIX 260 record directly to QuickTime using Apple’s ProRes or Avid’s DNxHD codecs. Since PIX recorders use ProRes and DNxHD, files recorded in the field can be used directly in post production, making the workflow simple and fast. The PIX 240 and PIX 260 add even more flexibility, with their time code, sync generator, and simultaneous SDI and HDMI outputs. All PIX recorders bring the company’s award-winning audio expertise and performance to their video products.