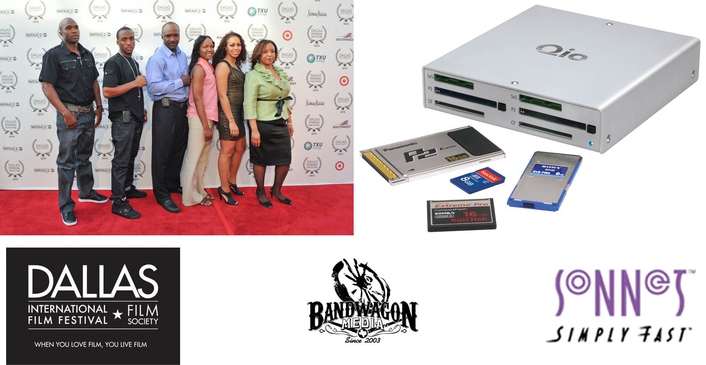 High-Speed Transfers and Flawless Performance for the Ingest of Festival Footage from Seven HD Cameras
Sonnet Technologies announced that its Qio™ professional universal media reader/writer was utilized at the 2010 Dallas International Film Festival (DIFF). Bandwagon Media, a Dallas-based full-service media company, used the Sonnet Qio™ to ingest the footage from seven in-field cameras that recorded every event activity from question-and-answer sessions to parties and red carpet events. The content was then edited into event recaps and uploaded onto YouTube.

During the first few days of the event, Tim Harry, co-founder of Bandwagon Media and edit bay supervisor for the 2010 DIFF, ingested content from seven Panasonic P2 HD cameras using USB and FireWire®, a process that took several hours each day. But soon he began using Sonnet's Qio, which connects to his MacBook® Pro through the PCIe Bus Extender ExpressCard/34, allowing high-speed transfers with aggregate bandwidth of up to 210 MB/sec. Qio enabled easy transfer of content from two Panasonic P2 cards at a time, cutting ingest time by three quarters and providing more time to edit and upload 63 videos to YouTube over the course of the festival.

"The difference the Qio makes to my workflow is amazing. The speed of Qio is incredible, not to mention that it can transfer data from two P2 cards concurrently. The results speak for themselves: 63 videos in 10 days is quite a feat," said Harry. "Before using Qio, I was transferring content right off the cameras via USB and FireWire. Not only did this take forever, but it used a ton of tape and required eight MacBook Pros to pull in footage. With Qio I only needed two MacBooks Pros: one to bring in footage and one to edit."

"The Qio proved to be highly reliable and its flawless performance was vital for this event," added Harry. "I would recommend this device to anyone, especially when time is of the essence. I didn't experience one hiccup in those very hectic 10 days."

Sonnet Technologies Inc. of Irvine, Calif., is a leader in providing storage systems for professional users of Macintosh®, Windows®, and UNIX® systems in the film, video, and broadcast industries. Since its founding in 1986, Sonnet has pioneered and brought to market innovative solutions that enhance the performance and connectivity of Macintosh and industry-standard computers. Today, the company is a world-leading computer hardware upgrade company with a product line featuring a range of high-performance, cost-effective, and reliable storage solutions, as well as a variety of performance-extending upgrade cards.