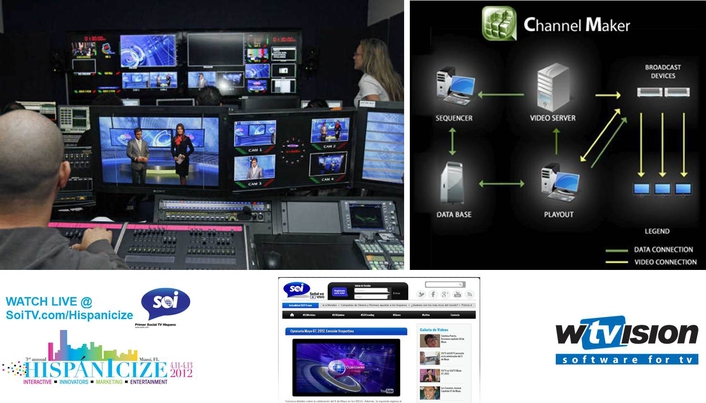 SOI TV reaches millions of Hispanic households across the United States through an innovative way of broadcasting that enables users to interact, in real-time, with its on-air programming. Viewers can give their opinion about the news by interacting with the channel via Facebook, Twitter or SOI’s website.

wTVision offered an end-to-end service to support SOI TV to build this channel from scratch, together with Imagina US, wTVision’s partner and leading broadcast service provider.

For this project, wTVision's Playout Automation System, Channel Maker, interfaced with a Nexio Video Server from Harris as the main source of content. Sequencing data came from Broadway Systems' traffic management platform and all sources were routed throuh a Snell video router including all the channel's live sources. All the channel's graphics came from a VizRT engine and everything was key'ed and mixed in an IconMaster from Harris master control switcher.

All source management and switching was made possible through ChannelMaker's plugins for each individual hardware/software in a "project" configuration that selects all the relevant controllers and then coordinates each one via a central command to each peripheral in real-time as the channel plays out. 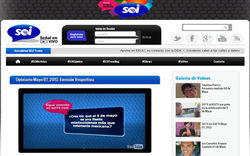 - Final user Sequencing for fine grained control over the broadcast

During live and recorded shows, virtual polls and graphics are broadcast with social media (twitter and facebook) data feeds, with updated real-time information.

SOI TV broadcasts recorded shows, live programs, as the Opiniario, an original format that is focused on the dialogue with its audience around the latest trending topics and news, entertainment shows from all over Latin America, interactive telenovelas, among others.

For the live shows and live graphic insertions on Master Control Room over recorded programs, SOI is using Studio CG, a content management system, to edit, manage and control the graphics. This very intuitive software allows CG operators to introduce the information and play it on-air with ease. It also allows them to create new templates and forms to create new graphics when needed.

Audiences can experience SOI through its online live streaming webcast or through their television.

At the end of the project, Julián Isaac, SOI TV CEO said: "wTVision worked hard to launch the US Hispanic TV Network - SOI TV. I’m very pleased to work with this team. Its professionals had a very proactive and efficient approach to the project.  Also, the high quality of Studio CG and the huge flexibility of Channel Maker have been crucial for the success of our project!"