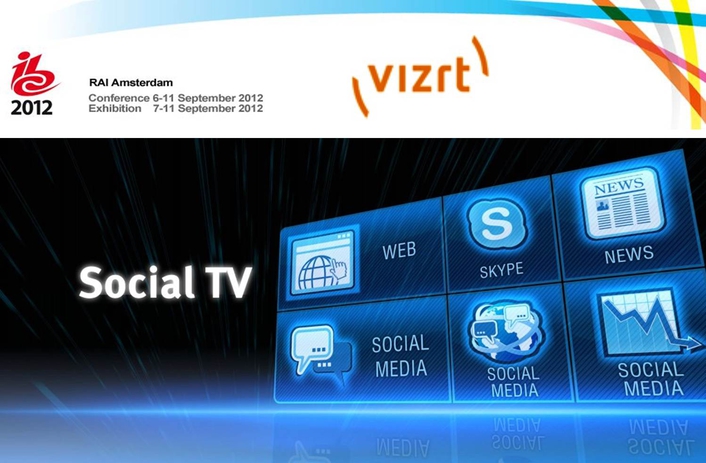 .
At IBC 2012, Vizrt Ltd will exhibit in Hall 7, Booth A10 September 7-11th at the RAI Exhibition and Congress Centre in Amsterdam. Vizrt will introduce several new innovations and demonstrate a cohesive approach to social media interaction.

Empower your audience
Integrations with Twitter, Facebook and Youtube will be shown with Viz Virtual Studio in Vizrt’s public show at the booth, with Viz Ticker3D for the design of creative tickers, with Vizrt’s character generator Viz Trio, and with Viz Multichannel for channel branding. Also new at IBC will be a Vizrt Skype interface which provides tools for the newsroom and production staff to interface with Skype calls directly from newsroom systems, Viz Trio and Viz Content Pilot.

The Vizrt public show will include second screen integrations that demonstrate how the audience at home can interact with a broadcast on their mobile device.

Further interaction with the audience through social media will be on full display on several multi-touch screens throughout the booth. Interactively control and display feeds coming from twitter or see historical trending topics and how they relate to geographic locations.

Flexibility and IP streaming
Vizrt’s real-time 3D compositing engine, Viz Engine is receiving a major update to its capabilities in the form of IP streaming. The Viz Engine now has the capabilities to take streaming content in and out, adding flexibility to the engine’s configuration in the station environment since only a network connection is needed. The Viz Engine renders real-time content and outputs the IP stream so the video can then be easily distributed to the web and mobile devices.

Viz Engine is being updated further with DVS SpycerBox integration. SpycerBox makes it possible for up to 8 Viz Engines to play out full broadcast quality HD video clips from a single shared storage.

Control the action
A new plugin for the Viz Engine gives users the ability to trigger clips in a EVS instant replay system. The plugin allows designers to create interactive scenes and send commands to the EVS system. This allows operators during a live sport event control of the EVS and all graphics from a single interface.

A gateway to all your content
The Viz Media Engine, Vizrt’s file-based video solution, can be a full media asset management (MAM) or act as a gateway to existing MAM solutions. As a gateway, the editorial staff can search for all their assets through the Viz Media Engine interface in their Newsroom Control system. The Viz Media Engine recognizes all the content stored in existing MAM systems and retrieves that content through search results. This allows the editorial staff to have access to all video content and graphics in a single interface to distribute on-air, online and mobile devices.

Branding video content is an important part of station identification, especially as that video content is now being distributed to many locations – on-air, online and mobile devices. During the transcoding process for multiplatform delivery, the Viz Media Engine performs automatic graphic insertion. Logos, ads and other graphics are adjusted based upon preset designs for the final screen resolution ensuring your brand remains intact and the graphics are always of the highest quality.

Cost-effective broadcast live video recorder for SDI acquisition
Viz Video Engine, Vizrt’s broadcast live video recorder for SDI acquisition, has been completely redesigned for the HD broadcast world. The recorder is controlled and managed by the Viz Media Engine. A single chassis handles four channels of ingest and playout, each capable of recording files from an extensive selection of HD and SD broadcast video formats. All video is wrapped in the MXF format, stored locally and made accessible through an FTP interface. Files are automatically moved and transcoded to centrally managed storage by Viz Media Engine. This means assets can be searched, previewed and edited from Viz Media Engine – even while recording is still ongoing. Once recording completes, Viz Media Engine automatically deletes unwanted media.

Access to the world
Vizrt has partnered with DigitalGlobe to provide a low-cost streaming imagery service to Viz World. This service, DigitalGlobe Online, gives customers full access to DigitalGlobe’s vast imagery database. When combined with Viz World, producers can create real-time 3D maps with high-resolution satellite and aerial imagery for anywhere in the world. With the FirstLook option, the latest satellite imagery from hotspots around the world are available for purchase within hours of the imagery being taken.

Viz World is being further enhanced with the introduction of OpenStreetMap data. Don’t be limited to street level maps in just your city. With the OpenStreetMap data the map designer has access to a global database of street level data that can be easily installed and searched by address or point of interest. OpenStreetMap is a vector based data solution allowing the maps from Viz World to be easily scaled for distribution to all platforms.

IBC 2012 will also showcase innovations in sports analysis and 3D sports coverage as well as the full Vizrt suite of broadcast graphics tools. Creativity, efficiency and innovation across all platforms will drive Vizrt at IBC.