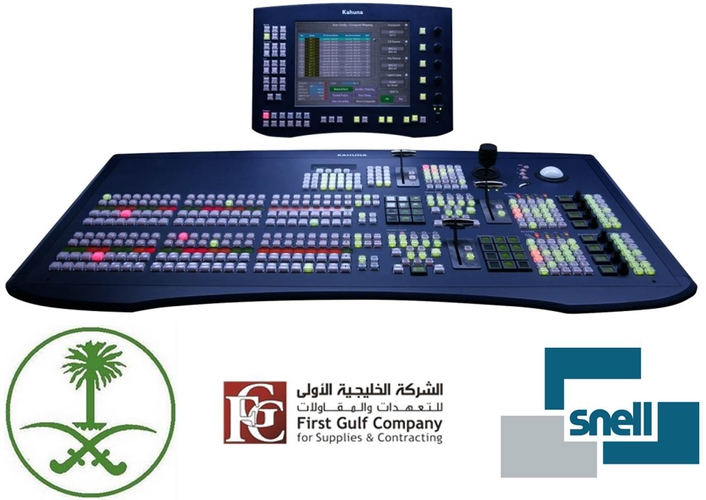 Kahunas Enable Saudi Culture Ministry to Make Smooth HD Migration for Broadcast Facilities at Mecca and Medina
On behalf of its client, the Saudi Arabia Ministry of Culture and Information (MOCI), systems integrator First Gulf Company has installed nine Snell Kahuna SD/HD multi-format switchers at the MOCI's TV production facilities within the holy sites of Mecca and Medina. As key players in a multi-million-dollar project to upgrade the MOCI's studios for HD production, the Kahuna switchers have enabled Saudi TV to make a smooth and cost-effective transition to HDTV.

"Since we specialize in state-of-the-art broadcasting installations, we only recommend top-quality equipment and solutions — and the Kahuna's multi-format capabilities made it ideal for the MOCI's particular requirements," said Naim Saidi, CEO of First Gulf Company. "By enabling our client to leverage legacy content from a variety of sources, the Kahunas have provided a cost-effective bridge to full HD production capabilities — and regardless of the source, the resulting HD output is without peer."

Throughout the year, the MOCI broadcasts daily prayers, news, and other programs for the Saudi Muslim community from the holy mosques at Mecca and Medina, with increased coverage during Ramadan and the annual Hajj pilgrimage to Mecca. Deployed in the on-air studios as well as post-production facilities, the Kahunas have enabled the MOCI to take a more gradual approach to its HDTV transition by giving operators the ability to mix in content from SD and other sources for the HD broadcasts.

"The MOCI's television broadcasts provide a critical service to citizens throughout Saudi Arabia by connecting them to their faith and giving them a personal link to Islam's most sacred sites — and now that connection is enhanced by the dazzling picture quality provided by HD," said Simon Derry, CEO of Snell. "Once again, Kahuna has played an integral role in a major broadcaster's ability to deliver the HD programming demanded by today's viewers, as quickly and seamlessly as possible."

Kahuna is the world's first and only true multi-format SD/HD production switcher. Thanks to a Snell technology called FormatFusion, Kahuna enables simultaneous SD and HD operations in the same mainframe and on the same control panel. This vastly simplifies the HDTV transition for broadcasters by eliminating the need for external HDTV up/down/cross converters in the live production environment, as well as the cost and the signal-path delay associated with these products. Kahuna has the smallest-size mainframe, lowest weight, and lowest power consumption when compared with other large switchers, and it has been integrated with dozens of third-party products including routers, servers, automation systems, and controllers.

First Gulf Company (FGC) is a system integrator/general contracting company based in Saudi Arabia, which specializes in turnkey projects in the complete broadcast field, radio/TV transmission projects and production systems, and audio/visual systems. FGC has built solid relationships with global companies in many industries and has built a reputation on its ability to provide the highest-quality systems and best technical support to its clients. The company has undertaken private and governmental projects for a wide range of organizations including the Saudi Arabia Ministry of Culture and Information, the ministry of finance, the Saudi Electricity Company, Saudi Oger Company, the Saudi Ministry of Interior, Saudi ARAMCO, and the Saudi Telecom Company.