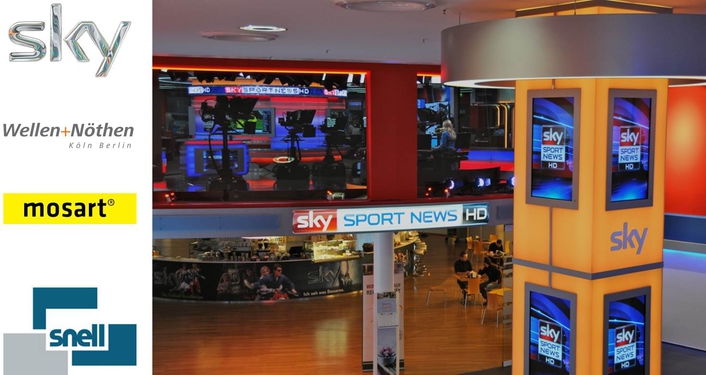 Kahuna 360 Works With Mosart® Newsroom Automation to Provide Complete Multi-format Playout Solution
Snell announced that its Kahuna 360 video switcher is driving production for Sky Sport News HD, the first 24-hour sports news channel to serve viewers in Germany and Austria. The Kahuna 360 is driven by a studio automation solution from Mosart®, and it joins Inews, Avid® Interplay®, and Vizrt systems to provide a complete workflow for switching and playout of multi-format video and graphics sources to air.

Sky Sport News HD is a production of Sky Deutschland Fernsehen GmbH and is available to Sky subscribers in Germany and Austria as part of the satellite provider's Sky Welt package. Snell partner Wellen + Nöthen GmbH provided systems integration for the Kahuna 360 installation. Kahuna 360 features up to six mix effects (M/E), four of which are currently in use by the Sky Sport News HD production. The reserve power provides ample room for growth as the new channel expands.

As the world's first native 1080p/3G switcher, Kahuna 360 supports any format in and any format out, on any input or output including 1080p (single link). Kahuna 360 offers seven keyers per M/E, 120 HD/SD inputs, 64 HD/SD outputs, and an audio/video clip store with 40 minutes of capacity for SD or eight minutes for HD. The switcher also supports up to 16 simultaneous broadcast productions from a single mainframe.

Sky Sport News HD is a real-time, graphics-intense channel that relies on a highly automated editorial and production environment that uses templates to feed the rundown of the news bulletin; therefore, the Kahuna 360's capacity to manage several key layers was a large selling point for Sky Deutschland. 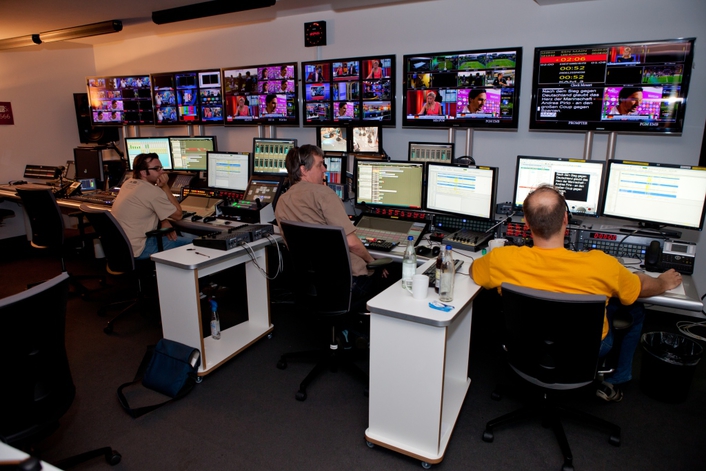 With the ability to control up to seven concurrent graphics presentations in a single M/E and four channels of comprehensive and integrated 3D DVE effects, the Kahuna 360 gives Sky Sport News HD the ability to deliver high-powered, multi-level graphics presentations with each broadcast. In addition, the Kahuna 360's extensive internal clip store enables the broadcaster to play out clips directly from the switcher, without having to rely on external devices.

"In our highly complex production environment, Kahuna 360 is being used in a rather unconventional way. Since it's so closely integrated with our automation systems, the switcher is able to deliver fully automated playout without anyone having to touch the console," said Francesco Donato, vice president of broadcast operations for Sky Deutschland. "Furthermore, thanks to the switcher's user-friendly graphical interface, Kahuna 360 makes it very easy to produce sophisticated effects to wow our viewing audience. Plus, Kahuna is the only switcher to truly enable multi-format switching through FormatFusion3, which is critical to our ability to handle mixed-format inputs and outputs."

Snell's exclusive FormatFusion3 technology enables Kahuna 360 to handle any combination of SD, HD, and 3Gbps/1080p inputs, and then to provide high-quality 1080p outputs for low-latency multi-viewer feeds. In addition, Sky Sport News HD has made use of the switcher's versatile Make M/E™ technology, which enables operators to create tailor-made M/Es by selecting inputs, keyers, stores, DVS, and outputs. The Make M/E technology gives the network unmatched flexibility when sharing resources in the mainframe and making the rest of the content pool available for other programs.

"Not only is Sky Sport News HD breaking new ground as the first 24-hour sports news channel in its region, but it's also our first deployment of Kahuna 360 in a 24-hour live transmission environment," said Stefan Geradts, Snell sales director, Central and Eastern Europe. "The fact that Sky Deutschland chose Kahuna 360 for such an important new service offering is a real testament to the versatility, performance, and technology excellence of the switcher, which truly is the most innovative automated live production concept in the world."