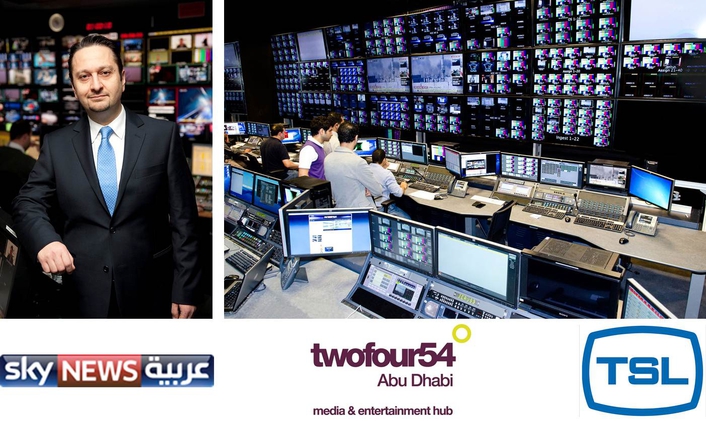 Nart Bouran, Head of Sky News Arabia: On track to launch free-to-air 24-hour Arabic news channel in Spring 2012
Sky News Arabia, the free-to-air 24-hour Arabic rolling news channel, launching in spring 2012, today announced the move of its editorial and operational teams into its newly built state-of-the-art studio site in Abu Dhabi city. The new studio and production facilities are considered to be the most advanced in the region.

208 kms of cables and over 100 tonnes of advanced broadcast equipment installed
The channel will deliver breaking news in both HD and SD formats focusing on the Arab world via twelve dedicated bureaus across the region and globally, as well as access to Sky News’ international bureau network. Nart Bouran, Head of Sky News Arabia, said: “The move to the new site is a significant milestone in the Sky News Arabia launch plan, launch plan. We are already carrying out technical rehearsals and will start with full studio rehearsals later this month. Our investment in this high-tech studio complex affirms our commitment to provide fast, fresh live, evolving news across our multiple platforms - television, tablet, mobile and online.”

Since April 2011 the technical integration process at the new studio complex, which is now located inside twofour54 the Abu Dhabi media hub , has been supported by Television Systems Limited (TSL), who have worked closely with Sky News Arabia’s engineering team on the design. Last month, TSL handed over the broadcast system including approximately 208 kilometres of cables into the facility, in addition to over 100 tonnes of state-of-the-art broadcast equipment.

Bouran added: “We have appointed a great mix of talented presenters who will be engaged through multimedia platforms in advance of the TV launch. The technical operation we have delivered will allow each presenter to deliver a vibrant and fresh format in news delivery.” 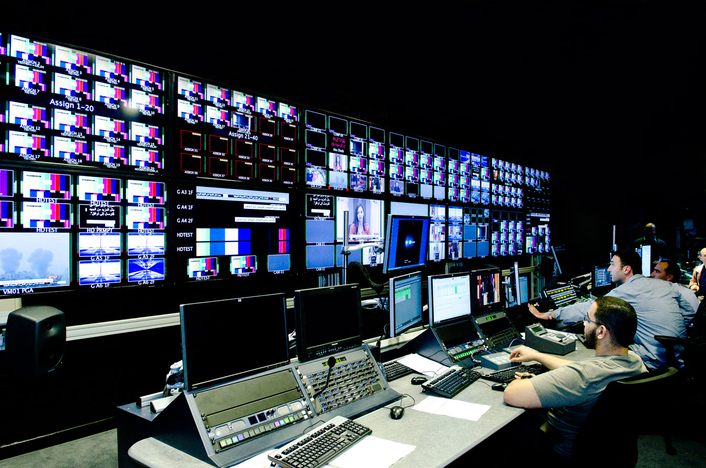 Sky News Arabia will broadcast from a single large studio, housing a number of permanent sets dedicated to different programs, providing seamless flow from one area and presenter to another, giving production directors maximum flexibility over their 11 cameras. A massive 10 meter wide video wall will be employed to visually aid in-depth analysis of stories being covered. The studio will be technically advanced with HD equipment and tapeless newsroom production facilities, allowing content to be transferred for near-instant availability across Sky News Arabia’s regional and international networks.

All these technical specifications at the new studios aim to ensure that Sky News Arabia will deliver fast, breaking news 24-hours a day.

About Sky News Arabia
Launching Spring 2012, Sky News Arabia will be a free-to-air 24-hour Arabic rolling news channel reporting the news as it happens in HD. Set up as a joint venture between Abu Dhabi Media Investment Company (ADMIC) and British Sky Broadcasting (BSkyB), Sky News Arabia is based in Abu Dhabi and will broadcast to over 50 million homes in the region. It aims to deliver fresh, fast and independent news from across the Middle East and North Africa (MENA). The channel will deliver the news across multiple platforms including online and mobile devices to provide fast news on the go.Sky News Arabia will be an Arabic channel for Arab viewers, delivering politics, economics, business, sport, lifestyle, technology and cultural news with 22 presenters from across the Arab world.The channel will have 12 bureaus across the region and draw upon the Sky News’ network of bureaus around the world for international coverage.