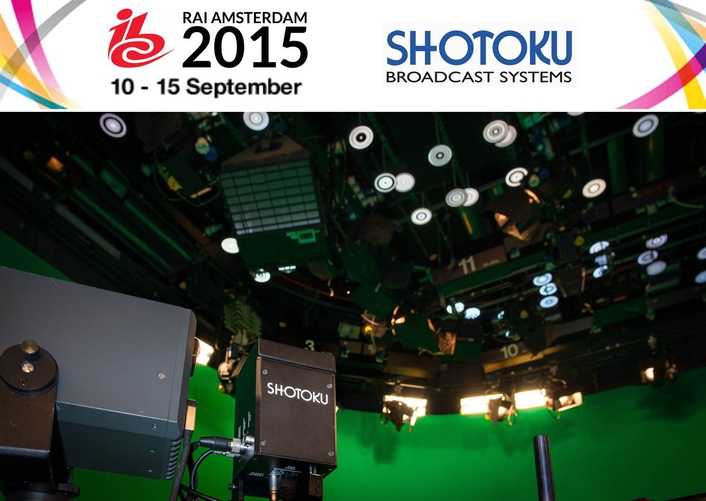 In addition, the whole range of manual and robotic camera support systems including the TP-200 lightweight pedestal, state-of-the-art SX300 EFP pan & tilt head systems and the unique SmartTrack rail camera system are being highlighted, and new control systems features and fully robotic pedestals are at show.

“We love IBC, and always aim to put together an impressive range of demonstrations providing a truly hands-on experience for the many visitors we see”, says James Eddershaw, sales director Shotoku UK.  “In this, our 70th year, we are especially excited to be showing several new products across the range of manual, robotic and VR tracking systems, and I’m confident that all visitors, whatever type of camera support systems they are looking for, will find something to match their requirements”

NEW
Free-d2 – Next Generation Absolute VR / AR Tracking System
IBC serves as the backdrop for the worldwide launch of the latest in Shotoku’s range of leading VR/AR tracking systems. Free-d2 ushers in a new generation of tracking systems that do not require physical encoder devices attached to the camera support’s moving axes. The system, based on advanced algorithms developed within the BBC’s world-renowned Research and Development centre, uses simple ceiling markers to precisely determine the exact position and orientation of the studio camera. The system provides highly accurate and constantly referenced (i.e. absolute) position tracking.  No concept of a home or reference point exists for Free-d2 – regardless of where the camera is positioned – the system instantly knows its exact location and orientation in all 8 axes.  The position tracking data never drifts, no matter how many complex moves or hours of operation the camera has. 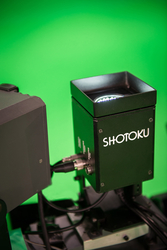 The small Free-d2 camera is attached to the broadcast camera in such a way that it does not interfere in any way, and constantly views the lighting grid area where markers are positioned.  Being attached directly to the camera means that any type of camera support can be used, including Steadicam or even handheld cameras.

The markers are made of simple reflective material and can be placed anywhere within the studio lighting grid or ceiling area.  Once an initial studio calibration is carried out, the system will typically never require calibration again.   In use, the Free-d2 camera only needs to see a handful of markers to calculate the precise position of the camera, so obstructions such as lights or any other ceiling-mounted equipment are no hindrance to operation. 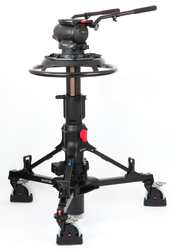 TP500 pneumatic pedestal
Shotoku is also presenting its new TP500 compact and lightweight pneumatic pedestal to the European market for the first time at IBC 2015. The pedestal, capable of supporting camera payloads of up to 55 kg. (121 lbs.), ranges from 665mm (26.2”) to 1,485mm (58.5”) in height, and is suitable for multi-location use such as OB, studio or event production. The robust modular design allows simple transportation of the TP500 between locations, without compromising its ability to provide a stable platform for camera operators. In addition, the TP500’s integrated inflation pump offers flexibility and freedom, regardless of the broadcast location. The pedestal is ideally paired with Shotoku’s SX300 and SH100/120 pan & tilt heads for optimal performance. 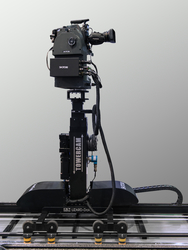 HIGHLIGHTS
SmartTrack ‘smart’ rail camera system
At this year’s IBC Shotoku is highlighting its SmartTrack system, a fully integrated product based on the core track-based technology of MAT, Germany.  Since its launch at IBC 2014 the SmartTrack system has proved very popular and is in use 7 days a week at a major Scandinavian broadcaster as part of a very large upgrade project completed in 2015.  SmartTrack is highly adaptable, supporting floor or ceiling operation and a range of height column configurations, in both upright and inverted modes.  The high quality engineering of the systems ensure that it is robust and stable, designed for long-term use in demanding applications such as 24/7 news or TV.

Plus:
Shotoku is also showcasing its entire line of robotic pan & tilt heads and height drive combinations including the TG-18/TI-12 and TG-27 / Ti-11 alongside the TR-XT advanced robotic camera control systems; the Orchestra Camera Management System for Parliamentary TV systems; SX300 and SG900 heads and the TP-200VR studio pedestal.

About Shotoku Broadcast Systems
Shotoku Broadcast Systems is an international leader in the manufacture and marketing of a full range of camera support products with emphasis on manual and robotic pedestals and pan/tilt heads for the television broadcast industry. The Company also provides robotic camera systems capable of interfacing with third-party equipment. Established as an engineering design firm specializing in advanced mechanics and electronic control systems, Shotoku maintains headquarters in Japan with offices in Staines, UK and Torrance, CA. The Company's robotic camera systems are designed, developed and manufactured in Sunbury, UK.