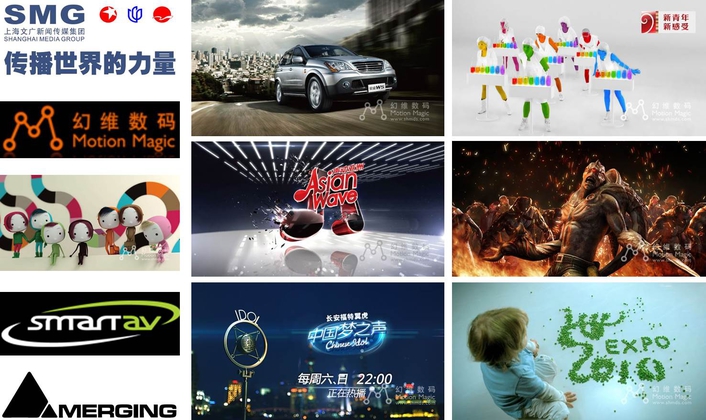 Iris is the latest solution and sets the standard for the Chinese post market
The latest upgrade of this prestigious post-production facility features two Iris post production systems. Iris is a scalable work surface, based around a Smart AV Tango 2 which features a 24” touch screen interface, along with a range of I/O solutions using the Horus Networked Audio Interface. From there, the core of the system consists of a Pyramix MassCore (or Native) recording, editing and mixing system coupled with VCubeHD video playback and management application.

Shanghai Motion Magic is one of Merging Technologies’ earliest and most loyal users in China dating back to 2001, first utilizing Merging’s Pyramix V3/V4 + Mykerinos MB1. Since then, there have been several rounds of expansions and upgrades and Shanghai Motion Magic currently operates three sets of Pyramix DAW systems that are operated beyond full-capacity. Motion Magic created a promotion bid movie directed by Zhang Yi Mou in 2002 for the Shanghai World Expo 2010. During this process, they discovered that the Merging DAW workstation sound quality was significantly better compared to other workstations. These advantages include better sound transparency, stage image, sound layers and synchronization with other devices including HDTV sync features. Moreover, Merging had superior continuity as the hardware did not require continuous replacements, only the Pyramix software required updates, with the computer platform needing periodic updates to migrate to newer operating systems such as from Windows 2000 to Windows 7. Some competitor DAWs have been unable to match this level of continuity in their products.

In 2012, Shanghai Media Group (SMG) required that all existing Motion Magic DAWs must connect with the AVID ISIS 5000 network systems. All post-production studios would transition to being networked. If Merging’s Pyramix DAW was incompatible with the ISIS 5000 network, it would have faced elimination from their workflow. However, Motion Magic was reluctant to relinquish the use of Merging’s DAW. With some fine tuning, Merging is now able to successfully meet the ISIS 5000 networking requirements. This culminated in the decision in August 2013 for the first phase of upgrades for Motion Magic, to upgrade two of the three existing Pyramix systems from Pyramix V6 to V8 with a corresponding addition of VCube software. The existing Mykerinos board will now be replaced by Horus including new computer hardware and two Smart AV Tango 2 20 fader controllers. The upgraded Pyramix systems will be placed in two post-production studios with RAVENNA protocol network connections.

Motion Magic plays a prominent role in Chinese CGI, film, and broadcasting media. The upgrades in Merging Pyramix at Motion Magic will be an important pilot project in the region. Recently, Shanghai Oriental Pearl TV will also be utilizing full Iris systems for HDTV 5.1 production provided by Dolby China. Through these recent developments, Merging has established a firm foundation in the Chinese region for these platforms. Weishen Xu, the President of Merging Asia commented: “This new Iris system is exactly what the Chinese market has been looking for and it is particularly pleasing that Motion Magic is leading the way because we enjoy such a good relationship with them. Now our major partners in China have seen what Iris can do, we expect many more sales.”

Shanghai Motion Magic, a subsidiary of Shanghai Media Group was founded in 2000. Motion Magic in China has four studios, with three in Shanghai and one in Yunnan province with a combined studio area of more than 10,000 square meters. Motion Magic has over a billion RMB in investments and employs over 400 individuals. The core business areas for Motion Magic include design and development of original animation, animation outsourcing, media packages, branding and promotions, television advertising, government and corporate promotions, studio productions, HD and film telecine color correction, video editing, 3D and multimedia effects, etc

Smart Consoles are designed and manufactured by Smart AV in Sydney, Australia. The Smart AV development team has more than 40 years’ experience of designing and building Digital Work Stations at Fairlight and DSP. Award winning designs, with individual and team awards ranging from the Academy, NAB, PAR, and Australian Design. Smart AV introduced ARC Technology in 2004 to produce the most ergonomically efficient mixing controllers in the world. Since that introduction the ongoing development of the technology by the Smart AV development team has produced the Professional Series of 5 console models, MonARC (ARC technology for monitors), and now Tango 2.