SGM X-5/P-5 Blast Off in Switzerland 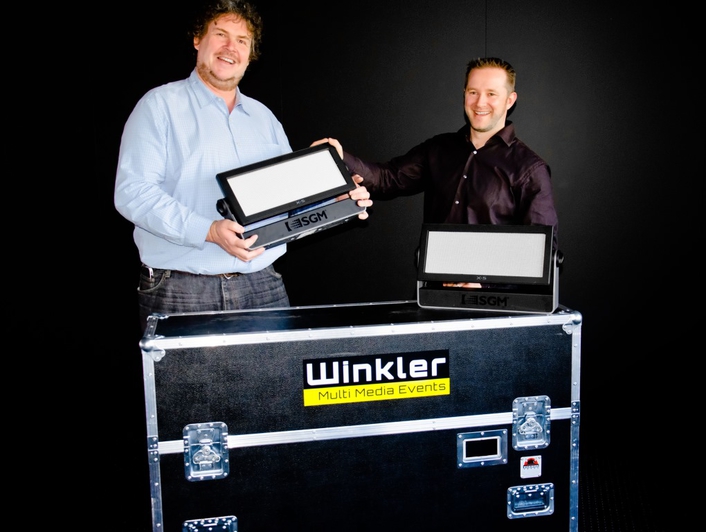 According to ASL’s CEO and founder, David B. Scherz, “It was a strategic decision to take on SGM at the end of 2012 and we are delighted by the initial response.

“Due to our long term relationship with many customers in Switzerland we introduced the brand via a selective private roadshows and are now holding weekly workshops all over the country as well as sending out sample units.”

One of the first companies to see the new product showcase was Winkler. “It was the first company we visited and they were immediately interested in the X-5 [white strobe] and P-5 [high-powered washlight],” reports Scherz. “The technical people at Winkler had prior knowledge about the SGM products, but it was the combination of ASL and SGM’s support that brought about the breakthrough.”

Winkler Multi Media Events director, Serafino Melloni, confirmed that as a result, his company had invested in 24 X-5 strobes. “With this quantity, we are the leading provider of this model in Switzerland,” he said. More importantly the new low profile, lightweight and infinitely less power hungry LED strobes will be a straight replacement for the old technology industry standard strobes — and continues a gradual conversion to LED technology initiated by Winkler back in 2007. “We liked the very high efficiency and control features of the X-5 which ensures consistency throughout recurring productions.”

But an equal success — for both ASL Electronic and Winkler Multi Media Events — has been the new P-5 washlight. Says David Scherz, “Most of the time when we send a sample of the P-5 out we do not get it back — which means it has become our best-selling item. It’s the right product at the right time.”

Technical Manager and light designer Roni Huber agrees, as Winkler has invested in 30 P-5 RGBW and 35 P-5 TW (tunable white) fixtures for a major installation project, after carrying out extensive tests. Appraising the unit, he says, “We loved its sleek and plain design, its light weight — half that of its direct competitor — its extraordinary brightness and lower power consumption than the product we compared it with.”

These will go straight into the new Event Hall Basel — part of the overall renewal of the Messe Basel exhibition area — with the outstanding new buildings designed by world famous architects Herzog & de Meuron.

The new hall was fully equipped by the end of May … shortly before the general assembly of MCH, the Swiss Exhibition Group.