SGM Has an Alpine Ball 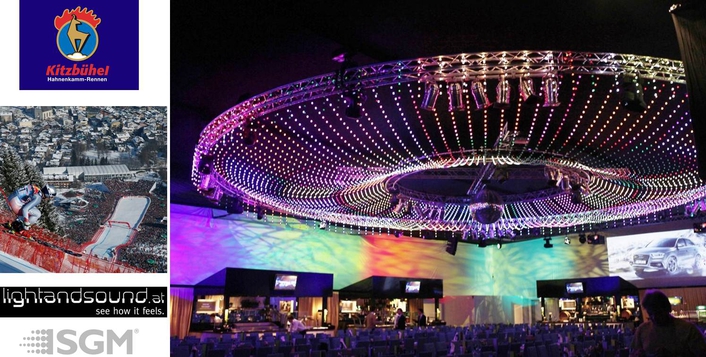 The occasion was the annual Kitzbuehel World Ski Cup — a major event in the Alpine ski calendar. Production company Light and Sound.at has been servicing the event every year since 2001 — providing reinforcement on the main stage in the mediaeval town centre, as well as the VIP tent.

It was in the VIP tent that the production company was seeking a unique solution. Familiar with SGM’s LED products having used the LED Par Zoom, they already had the concept of using 360° balls festooned on strings when they were introduced to Thorsten Sattler, co-MD of SGM Germany.

“We wanted to produce a very special show for the guests in the tent, and at the stage in town. As soon as Thorsten introduced us to the SGM balls we were hugely excited about this product,” said Light and Sound project manager, Günter Dorfer. “The idea was to create a giant chandelier to provide a luxury ambience during the day and a perfect light source placed over the audience for the show event itself.”

Responsible for the design were Markus Klotz, Light and Sound’s MD, in conjunction with the LD Freddy ‘Rock Freddy’ Oberlassnig. No fewer than 1,008 1-metre strings (each containing seven 34mm balls) were used to construct each circle … making a total of 14,112 tiny spheres distributed across 2,016 strings.

In addition to the vast consignment of LB-100’s Light and Sound fielded 140 moving heads, 100 par cans, video and audio, with media server (to control the Balls) requiring a total of 128 DMX lines (over Ethernet).

Markus Klotz says the LED Balls proved hugely popular. “The customer reaction was amazing and the impact of the LED Balls exceeded everyone’s expectation. Also our lighting designers and crew were extremely impressed.

“This is a very versatile and deployable system and we really enjoy creating new forms and structures with the SGM Balls. We have also designed special cases for the dry hire market, which allows us to pack the system ‘ready to go’ — with easy transportation and fast setting up and demounting.”

Light and Sound.at don’t expect to see these strings languishing long in the warehouse. “We have already experienced some very good shows with the LED Balls — for example the Austrian Media Awards, Tirolissimo, and we are looking forward to have many exciting shows with this amazing system,” they say.