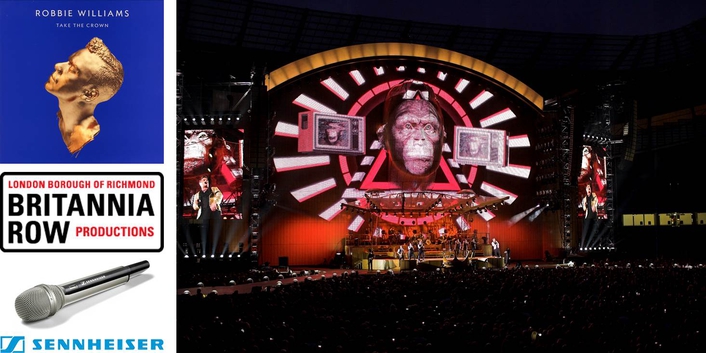 .
Always a consummate showman, Robbie Williams’ 2013 UK and European Take The Crown stadium tour was sure to wow. Featuring a spectacular stage set and energetic performance, and with Sennheiser microphones and in ear monitors providing crystal clear audio for both performers and audience alike, it certainly doesn’t disappoint.

The compliment of Sennheiser equipment includes 2000 series IEMs, supplied by Mission Control Ltd, for both Robbie and support act Olly Murs’ bands, with SKM 5200 wireless microphones supplied by Britannia Row Productions, which handled all vocals for the headline act.

“The bulk of the stage radio systems for the tour are Sennheiser products,” says Ali Viles, the tour’s RF tech. “The core of this is 22 channels of Sennheiser 2000 series IEM transmitters performing monitoring duties for both the main and support bands. The show uses over 50 EK 2000 IEM receiver packs, supplying mixes to the musicians, stage management and production teams. The 2000 series IEMs sound great and are incredibly robust, consistently delivering the audio clarity required in a variety of harsh environments, for both performers and technicians.

Vocal mics are the afore mentioned SKM 5200 radio transmitters, with 5235 capsules and EM 3732-II receivers, which were specified by monitor engineer Simon Hodge and Front of House engineer Nick 'The Hat' Allen for their audio clarity and polar response.

“A large quantity of the show happens with one, or several singers, a long way in front of the PA,” Ali explains. “The response of the 5235 capsules helps Nick to overcome the obvious feedback issues that this can cause.” 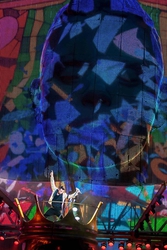 “The 2000 IEM system has a couple of advantages for us,” adds Simon. “Firstly the high RF power mode helps us to combat the coverage problems that such a high, wide and deep set poses. Robbie starts the show 25m up in the air and descends on a zip wire. Him being able to perform in this situation is crucial, and only this system gives us clear audio when presented with such obstacles.

“Robbie ends up singing on the two catwalks that protrude out into the stadium floor, at which point he is some 30m or so in front of the main PA hangs, which are certainly not quiet... The use of the MD 5235 capsule for his (and the other singers) vocal mic gives us considerably less spill down his channel. PFL’ing it when he is out there is quite surprising: it sounds like he is in a vocal booth and not in front of a PA system for 80,000 people!”

But the biggest RF issue the team faces on the tour is the RF spectrum pollution they take with them.

“The set comprises an enormous custom made 3D video screen, built of individual pixels, which emits wide band pulsed noise across all of the radio spectrum that we are allowed to use,” says Ali.

“As soon as the screen is turned on, the noise floor between 450MHz and 800MHz rises by about 25dB, making it very difficult for any low power radio systems to work reliably. Even the tour walkie talkies are badly affected by the screen. The 2000 series IEMs, with their adjustable transmitter power, working in harmony with the Sennheiser A5000CP antennae, help us to overcome this interference.

“Ultimately, the amount of self-generated interference on the tour has forced us to be very selective with our equipment choices and deployment, making sure that we have the best possible product for the job. The 2000 series IEMs consistently deliver and I doubt that we could achieve what we do with any other system.”

“They too have proven to not only sound great but to cope well with the interference from the screen,” Ali continues. “This is something that other manufacturers’ hand held radio systems that we have seen on this show have not achieved. Once again, I think that we would struggle to make this show work with any other hand held radio mic system.”

As well as their confidence in Sennheiser’s equipment, Ali and Simon know they can rely on the support of Mark Saunders and the Sennheiser UK team.

“The support has been excellent as ever. Wherever we are, we feel like we can ask for help and always get it,” says Simon.

“Simon and I have a long standing relationship with Mark Saunders. And the Sennheiser UK team has been incredibly helpful,” concludes Ali. “Their support has ranged from answering technical questions, through to providing spare parts and consumables as required. Their tireless work goes a long way to giving the Sennheiser brand the outstanding and respected reputation that it has in the live audio industry.”