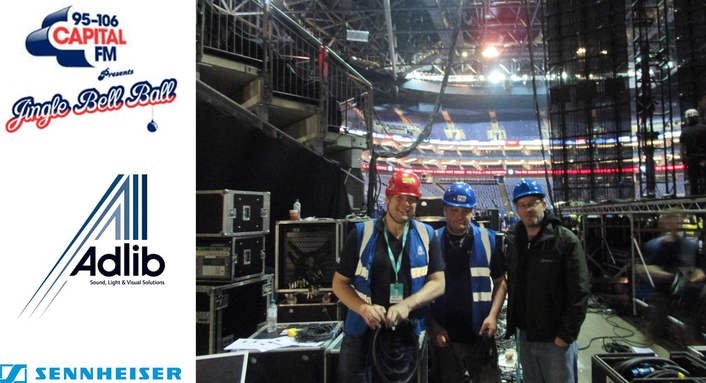 From left to right: Dave Kay, John Fitz and Mark Saunders
Each December, London’s The O2 plays host to the Capital Radio Jingle Bell Ball, which never fails to get music fans in the festive mood. As in previous years, Adlib Audio provided audio requirements for the two-days of festive fun, with Sennheiser radio mics and in-ear monitors - a perennial part of Adlib’s inventory for this challenging event – delivering flawless sound throughout.

“We’ve worked on the Jingle Bell Ball for a few years now,” says Adlib’s Dave Kay. “Each year it’s demanding, both in terms of the level of the acts performing and the quick turnaround times we have to work to, and this year was no exception.”

“We took the great formula we used over the past few years and replicated that, with Sennheiser’s wonderful support,” says Dave. “This year we tried out one of Sennheiser’s new Service Receivers. We always do a manual scan of the environment, which I did in advance of the Sennheiser guys arriving. Before we started deploying the radio equipment, we did a secondary scan with the Sennheiser Service Receiver and this verified my scan results. The results were available to view very easily on one screen using Sennheiser UK’s Wireless Systems Manager [WSM], which showed the entire frequency spectrum that we were operating in. As we connected the network to all of the RF kit, the pre-planned frequencies from the attached equipment were overlaid on the scan results.

“I believe that nothing replaces thinking about a system and planning it carefully, but every year, at events like this, there’s a new and innovative Sennheiser product that helps us with system management.

“This was a great test for WSM and although we weren’t relying on it for the show, now we’ve used it we’ll definitely be investing in it for tours where there is a large RF requirement.”

About Sennheiser
The Sennheiser Group based in Wedemark near Hanover, Germany, was founded in 1945 and has gone on to become a leading manufacturer of microphones, headphones and wireless transmission systems. Sales in 2013 totaled 590.4 million euros. Sennheiser employs more than 2,500 staff worldwide and operates plants in Germany, Ireland and the USA. The company has a worldwide network of subsidiaries in France, Great Britain, Belgium, the Netherlands, Switzerland and Liechtenstein, Germany, Denmark (Nordic), Russia, Hong Kong, India, Singapore, Japan, China, Australia and New Zealand, Canada, Mexico, and the USA. It also has long-established trading partners in other countries. Georg Neumann GmbH, Berlin, a maker of studio microphones and monitor speakers, and Sennheiser Communications A/S, a joint venture making headsets for PCs, offices and call centers, are also part of the Sennheiser Group.

Sex and Love for Adlib with Enrique
Sennheiser UK Helps Capit...Radio Kick Off at Wembley
Adlib Burns for Ellie Goulding