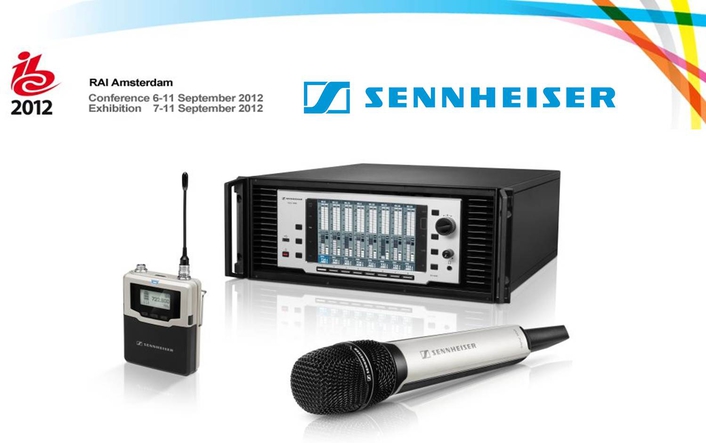 “This system is a masterpiece, both in the digital and the wireless realm,” said Kevin Jungk, portfolio manager for wireless microphones at Sennheiser. “It offers unprecedented sound quality and ease of use. For example, users will no longer have to calculate and circumvent intermodulation frequencies but can conveniently place their transmission frequencies in an equidistant grid.”

Ideal for the most diverse environments
The ground-breaking digital wireless system is fitted with two transmission modes to suit any need and environment. The High Definition (HD) mode will transmit entirely uncompressed, artefact-free audio, as if a high-quality cabled microphone were used. The Long Range (LR) mode has been designed for difficult transmission environments with many sources of interference. It ensures maximum range with a proprietary Sennheiser digital audio codec. “This refined codec ensures an audio quality that is superior to that of an FM system,” explained Kevin Jungk. “These two modes make Digital 9000 the most versatile digital wireless system available, and the best adapted to on-site requirements.”

Built-in ease of use
In addition to IR synchronisation between receivers and transmitters and a convenient antenna loop-through for creating larger receiving systems, Digital 9000 offers a number of unique features. First and foremost, the system does not generate any intermodulation products – the high linearity of the entire system, from transmitters to antennas and receivers, and a special transmitter design make laborious intermodulation calculation a thing of the past. Transmission frequencies can simply be set in an equally spaced grid. 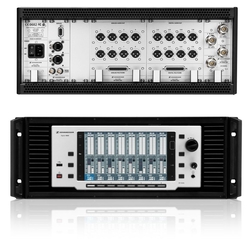 The receiver also automatically measures the RF cable loss between the receiver and the booster and adjusts the gain accordingly. “This makes the RF wireless system easier to operate for users with less RF knowledge,“ said Kevin Jungk.

Optimum control – more information on the receiver
A large display with clearly laid out controls is at the heart of the EM 9046 receiver. Three display modes ensure that the RF or sound engineer has an optimum overview of important parameters in live situations and can change settings quickly via an intuitive, icon-based menu. Channels can be monitored via the headphone output, either individually or any number can be listened to combined.

The modular EM 9046 receiver is a mainframe that accommodates up to eight receivers internally. The receiver system covers the UHF range from 470 to 798 MHz (328 MHz band­width). To easily integrate the system into an existing infrastructure, the user can choose between transformer-balanced analogue or digital AES3 audio output modules, or a mix of both.

System set-up is facilitated by a built-in graphical spectrum analyser to scan the RF landscape, and an RF level recorder for checking reception and optimising antenna positions. The receiver will also suggest the best transmission mode for the environment being worked in, and will automatically set an appropriate gain to counteract RF cable losses. The system’s antenna boosters can be controlled via the receiver, which is helpful for installations with remote antenna positions.

The multi-channel receiver and the transmitters can optionally use encrypted data transmission, with proprietary keys generated randomly. This will protect a radio link against hijacking and tapping.

The receiver stores up to ten complete system configurations so that set-ups can easily be recalled and repeated.

Powerful sound – more information on the handheld
The SKM 9000 handheld transmitter is compatible with all evolution wireless G3 and 2000 Series microphone heads, including the Neumann capsules KK 204 and KK 205. This means that an artist’s favourite sound can easily be transferred to the new system. Besides these capsules, the handheld can be fitted with four dedicated 9000 Series capsules.

“The 9000 Series would not have been complete without the sound of our most successful live capsule, and I am happy that the cardioid dynamic MD 9235 is part of our new digital system,” said Kevin Jungk. The rock ’n’ roll sound of the MD 9235 is complemented by the transparency of three permanently polarised condenser mic heads, the ME 9002 (omni), ME 9004 (cardioid) and ME 9005 (super-cardioid). The condenser heads feature a low sensitivity to pops and have extremely low handling noise due to snowflake-shaped rubber suspensions above and below the actual capsules.

The rugged SKM 9000 comes with an 88 MHz switching bandwidth, and is available in black and nickel. Command switch versions for easy communication between broadcast units or artists and their crews are also available. As the handheld transmits digitally, it does not employ a compander and is exempt from the associated noise, ensuring a cable-like purity of sound.

Versatile and lightweight – more information on the bodypack
The SK 9000 bodypack transmitter is easy to hide and easy to attach; it comes in a magnesium housing that combines maximum robustness with low weight.

The transmitter can be used with any clip-on or headset mic with a 3-pin Lemo connector  and has a line input for guitars or other instruments. “As the system is able to deliver cable-like audio, we have added a three-step guitar cable emulation – to round off the perfect instrument sound,” explained Kevin Jungk.

The SK 9000 is available in four different frequency ranges (88 MHz switching bandwidth); a command switch for communication between crews and artists/reporters is available as an accessory.

Selective and reliable – more information on boosters and antennas
To protect Digital 9000 against unwanted frequencies and interference, the AB 9000 antenna booster has been fitted with eight highly selective filters to allow just a specific frequency window to pass. 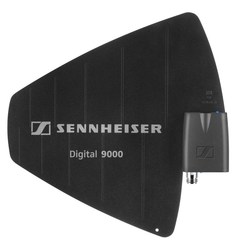 Unwanted signals are thus blocked out before the first active component, adding to the overall excellent reliability of the system. The filter can be set manually on the booster or remotely via the antenna cable on the receiver.

The AB 9000 provides a maximum gain of 17 dB and is available as a stand-alone booster or integrated into the A 9000 omni-directional antenna and the AD 9000 directional antenna. Two booster versions (470 to 638 MHz and 630 to 798 MHz) cover the receiver’s UHF range.

Power supply – more information on batteries and chargers
The transmitters of the 9000 Series operate on environmentally friendly lithium-ion rechargeable battery packs, with a precise remaining operating time indicated on the handheld and the bodypack transmitter as well as on the receiver. The SKM 9000 is powered via the BA 60 rechargeable battery pack, which will power the transmitter for 5.5 hours. The SK 9000 bodypack is powered by the BA 61, which lasts for 6.5 hours. Operation on standard batteries is possible too.

The L 60 charger will recharge two BA 60 or BA 61 in any combination. It reaches 70% of charge in an hour and full charge after three hours, with the charging status being indicated by three-colour LEDs. Up to four chargers can be daisy-chained and powered via a single power supply unit.

Spectrum-efficient wireless
“Summing up, Digital 9000 is a meticulously designed wireless tool,” said Kevin Jungk. “Spectrum is a scarce resource, therefore every part of the system has been designed for the highest frequency efficiency. We have put much effort into allocating the largest possible data rate to the actual sound transmission, ensuring the unmatched audio performance of Digital 9000. Because audio is what it’s all about.”

The Sennheiser Group, with its headquarters in Wedemark near Hanover, Germany, is one of the world’s leading manufacturers of microphones, headphones and wireless transmission systems. The family-owned company, which was established in 1945, recorded sales of around €531 million euros in 2011. Sennheiser employs more than 2,100 people worldwide, and has manufacturing plants in Germany, Ireland and the USA. The company is represented worldwide by subsidiaries in France, Great Britain, Belgium, the Netherlands, Germany, Denmark (Nordic), Russia, Hong Kong, India, Singapore, Japan, China, Canada, Mexico and the USA, as well as by long-term trading partners in many other countries. Also part of the Sennheiser Group are Georg Neumann GmbH, Berlin (studio microphones and monitor loudspeakers), and the joint venture Sennheiser Communications A/S (headsets for PCs, offices and call centres).