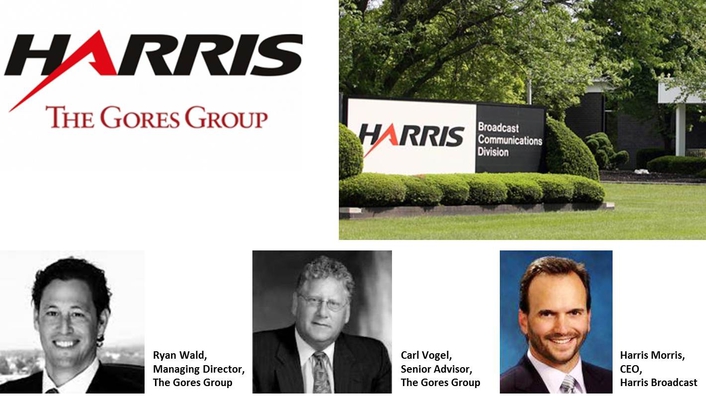 Harris Broadcast is now a portfolio company of The Gores Group
The sale — announced in December — was for $225 million. According to a news release this week from Harris Corp., the price includes $160 million in cash, a $15 million subordinated promissory note and an earnout of up to $50 million based on future performance.

A separate news release from The Gores Group said the former division of Harris Corp. will become a stand-alone company known as Harris Broadcast.

Harris Broadcast is headquartered in Denver and has about 1,700 employees, including about 300 at its plant in Quincy. The company is a global supplier of hardware and software that creates, manages, transmits, distributes and monetizes video content.

The Gores Group news release described Harris Broadcast as being "widely recognized as the preeminent brand in the broadcast communications equipment industry. It is well known for delivering an end-to-end breadth of offerings and for creating quality and reliable products."

Harris Morris, CEO of Harris Broadcast, touted the sale of the company to The Gores Group, a global investment firm that acquires controlling interests in mature and growing businesses that can benefit from the firm's operating experience and flexible capital base.

"This is an exciting new chapter for Harris Broadcast, our employees and our customers," Morris said in the news release. "The Gores Group is an ideal fit to help us move the business forward and help drive innovation, streamline operations and improve customer service. They will also provide us additional resources such as a flexible capital base and introduce new talent to the company."

Ryan Wald, managing director of The Gores Group, said: "We anticipate great things from Harris Broadcast. The company has proven technology, great products and an outstanding team. With our equity capital and guidance, we are confident that Harris Broadcast will transition to a strong, independent company that will continue to develop and deliver market-leading technology and service to its customers."

The Gores Group said Carl Vogel, a veteran of the cable television and satellite industry and a senior advisor to the firm, will be a member of the Gores team providing advice and strategic guidance to Harris Broadcast.

When the sale of Harris' broadcast communications division was announced in December, a high-ranking Harris official called the sale "a positive move" for Harris' Quincy plant.

"It's very encouraging that BCD is being encompassed into The Gores Group, which brings a lot of good investment and technology know-how," Chris Parsons, global vice president of operations and supply chain for Harris Corporation, said at that time. "It's positive for the BCD and all of our communities that work within the BCD."

The valuation of the deal was $225 million, comprised of “$160 million in cash, a $15 million subordinated promissory note and an earnout of up to $50 million based on future performance.”

The price paid by Gores for BCD is lower than what Harris executives previously indicated they hoped to achieve. As a result, Harris Corp recently recorded a noncash impairment charge of $98 million relating to the sale of BCD. This is fourth time the company has written down the value of BCD during the sale process.

Now under new ownership, Harris Broadcast remains one of the largest vendors in the broadcast technology space. The completion of deal means the company can now put behind it the uncertainty that has surrounded it since Harris Corp announced its intention to divest the business.

The Gores Group was founded in 1987 by Alec E. Gores. In addition to its Los Angeles headquarters, it also has offices in Boulder, Colo., and London. It has about $3.3 billion in assets under management.

Harris is an international communications and information technology company serving government and commercial markets in more than 125 countries. Headquartered in Melbourne, Florida, the company has approximately $5.5 billion of annual revenue and about 15,000 employees, including 6,000 engineers and scientists.