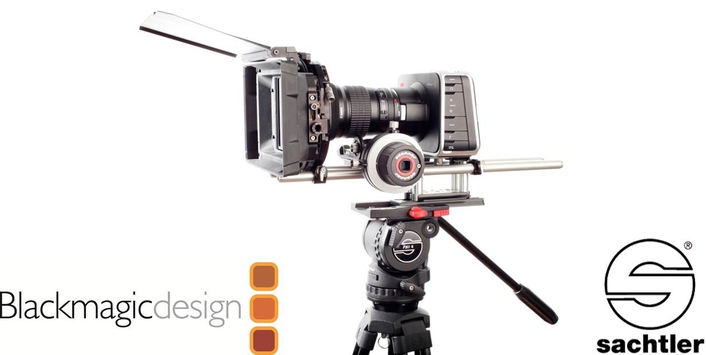 Sachtler FSB 6 Fluid Head is Ideally Suited for Blackmagic Design’s Cinema Camera
BlackmagicDesign created a huge buzz in the filmmaking industry with the introduction ofits amazing Cinema Camera, providing a true feature film look and amazingdynamic range for beautiful images, delivered at an affordable price. But thenew camera’s unique form factor requires a versatile fluid head system. Aperfect match for the Cinema Camera is the Sachtler FSB 6 Fluid Head, whichprovides Sachtler’s well-known operational feel and familiar dependability forprecise panning and tilting, with specifications to let the Blackmagic camera’suser get the most out of his Cinema Camera.

Introduction of Blackmagic Design’s Cinema Camera has spawned a large assortment of film-style camera and lens accessories. Camera users mounting a variety of lenses and accessories find themselves dealing with a wide payload range, from the bare-bones camera weight of 3.75 lbs (1.7 kg) to over triple that. The FSB 6’s 2–17.6 lbs (1–8 kg) payload range more than covers that span.

With its 5 inch built-in monitor on the back of the camera’s housing, many of the Cinema Camera’s users choose to operate using that screen in place of an external viewfinder. With little weight behind the camera’s tripod mounting tap, the FSB 6’s 4.7 inch (120mm) sliding plate range is essential to placing the camera, lens and accessory package squarely over the fluid head. The FSB 6’s 10 steps of counterbalance lets the user position the exact center of gravity over the head to keep the camera in place at any angle of tilt through the head’s entire +90°/-75° tilt range.

About Sachtler
Sachtler, founded in 1958 by cameraman Wendelin Sachtler, is a worldwide market leader of professional camera support systems for cinematography and television production. Due to true German engineering, the brand sets quality standards in the industry. Sachtler has stood for easy and quick handling, stability and reliability for decades. With an extensive range of camera support systems Sachtler is the highly qualified partner for broadcast and film applications. Since 2000 Sachtler has been offering the artemis modular camera stabilizer system. With its numerous workshops and training sessions, the Wendelin Sachtler Academy has become a top address worldwide for invaluable know-how and the exchange of information, creating the ideal international platform for creative talents. Along with other leading brands in the broadcast and professional videography industry, Sachtler is part of Vitec Videocom, a Vitec Group company.