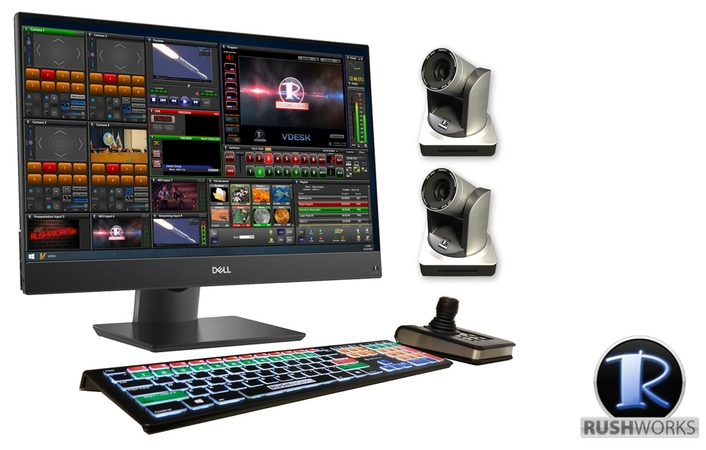 RUSHWORKS, provider of cool technology for production, playback and streaming since 2001, enters the market with a bang for 2020, introducing another “powerfully simple” integrated PTZ production system for remote and studio operation.

“NDI connectivity has transformed traditional wiring requirements into a few CAT5 cables that carry video, audio, PTZ camera protocols and power”, Beesley says. “We put more power and functionality into a couple of rugged Pelican cases than you’ll find in most OB (Outside Broadcast) vans … at a fraction of the size, cost and operational complexity.”

The software, which also powers RUSHWORKS VDESK and Ctrl+R solutions, includes a video and audio mixer with transitions, PiP and double-box effects and Chroma-key. It features a fully searchable File Browser for all media, and the ability to create multiple playlists for different events. It supports up to four NDI inputs and one NDI output, records the Program, and can output NDI and stream to popular sites such as Facebook Live and YouTube Live.

“The OB Van for REMO NDI can be a “smart car”, says Beesley. “One person can setup, produce and strike a multi-camera location production any time, anywhere - efficiently and effectively. It’s just cool.”