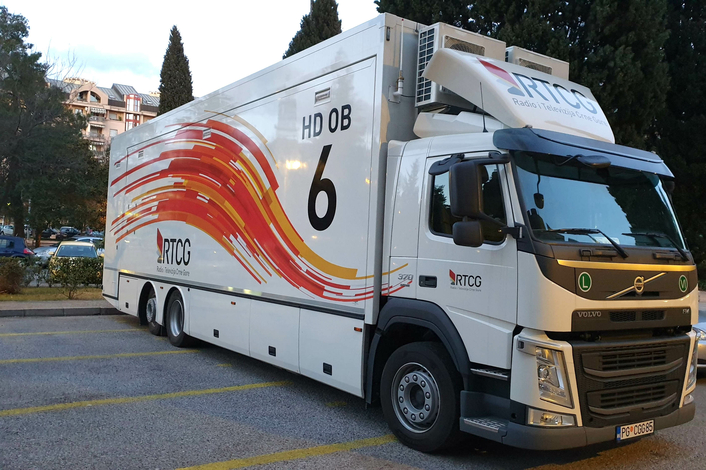 Dejan Vujović, Chief Technology Officer, said, “This was a particularly important production for us because it was RTV’s first stereo television transmission and it was distributed in HD. The sound quality was superb, and that’s due in large part to the new Artemis Light console we have installed. The Artemis is incredibly easy to learn and operate.”

The new OB unit is expandable on both sides and is equipped with 13 Sony cameras, though it’s cabled for up to 17. It also benefits from EVS Max servers, a Sony vision mixer, Avid graphics, a KSC control system as well as Calrec’s Hydra 2 audio networking capabilities. The OB unit has been designed to meet major sports rights holders’ production standards.

RTV Montenegro is a national public broadcaster that consists of three TV channels and two radio channels. Its content reaches 99 per cent of Montenegro’s population. The Artemis installation was handled by systems integrator BFE with the sale concluded by Calrec partner Kompani DigiTV.

Vujović adds, “Hydra 2 was one of the key advantages that we saw with Calrec. We have a stage box in HD OB 6, with internal audio sources plugged into that. Hydra 2 is used for all routing, including the audio that passes through two additional external stage boxes. They are connected via fibre and instantly appear on the network, completely transparently, making life for our audio engineers much easier. We will be installing further Calrec equipment this year as we continue the upgrade of both our television and radio studios.”

“It’s no accident that our consoles, including Artemis, are used widely in outside broadcasting. The Artemis, in particular, was the perfect fit for RTV Montenegro because of its superior sound quality, ease of use and flexibility. It’s already been used on a major production and is ready for more high-profile work. We look forward to continuing to build upon this great partnership,” said Mike Reddick, International Sales Manager for Calrec.

Calrec Audio is exclusively dedicated to excellence in audio mixing for on-air and live production. A broadcast specialist for more than 50 years, Calrec has developed a range of digital consoles relied on by the world's most successful broadcasters. Increasingly consoles are integral components on facility-wide networks, giving rise to adaptable workflows, shareable resources and the ability to be easily expanded. From the very beginning, Calrec has created innovative solutions that have allowed broadcasters to develop their working methods and get greater value from their equipment. For premium audio solutions, broadcasters put their trust in Calrec.