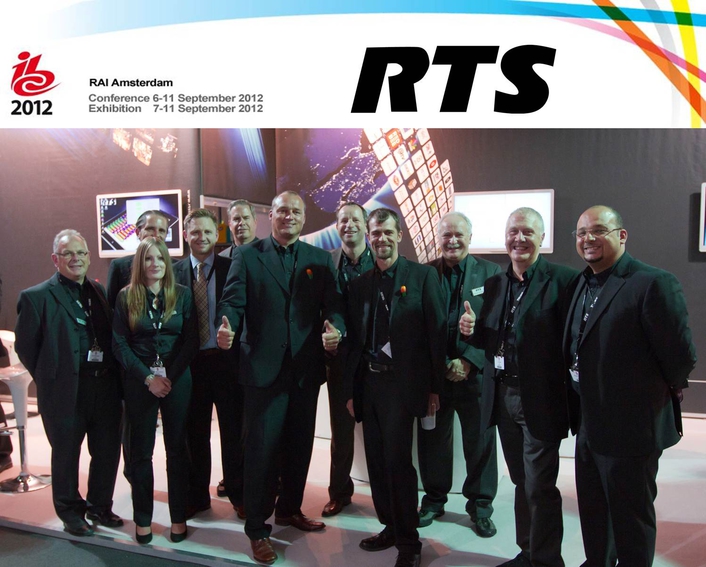 Had every reason to celebrate: the RTS team during the IBC 2012 - RTS presented its latest products
Large numbers of visitors, massive interest in the latest products – the annual International Broadcasting Convention (IBC), which ran this year from the 7th to the 11th September, once again lived up to expectations for RTS. “The feedback from customers and the press alike was extremely positive,” reports Kamil Swobodzinski, Sales Director Europe.

“The interest in IP-based products and technologies such as OMNEO was particularly lively. OMNEO is the latest Bosch-developed IP solution. It’s a media networking technology that simplifies the transportation of audio signals as well as system control for professional networking applications. Geographical distance is something we have had under control for years now with RTS IP products such as RVON, but with this latest development we are able to liberate these from a fixed location by extending our intercom product solutions to mobile devices.” According to Swobodzinski, the IBC 2012 fulfilled all expectations and provided further confirmation that “we are on the right track”.

Great interest: the well-attended RTS stand at the IBC 2012

Among the RTS core products on display were the advanced digital audio matrix ADAM-M. This compact 3U device supports eight cards as well as redundant master controllers. In combination with the MADI-16+, the ADAM-M can be configured with up to 256 ports – the most of any device in its class. The scalable and multi-channel (it supports up to 64 inputs and outputs) multi-audio digital interface card MADI-16+ was another of the products on view.

With its VLink (virtual linked intercom) software, RTS was presenting a DHCP-based communication solution for RTS intercom systems that can be implemented on numerous mobile terminal devices. The software grants remote users access from any geographical location to an RTS intercom matrix. VLink offers a multitude of flexible control possibilities and supports the session initiation protocol (SIP) for expanded connectivity.

The focus was upon ADAM-M, VLink and Optocore glass-fibre interfaces for RTS systems

In addition, RTS was showing the “V3R-FX-INTERCOM for RTS” and the “X6R-FX-INTERCOM for RTS” – the first glass-fibre interfaces for RTS systems developed by RTS’s certified partner Optocore. These devices offer users communication between RTS keypanels and matrices that is virtually unlimited in geographical terms as well as being interference-free. Both interfaces are compatible not only with all RTS but also with all Optocore devices.

The coveted “Distributor of the Year” award went for the second year running to the French RTS partner Pilote Films. Presenting the award at the IBC, Kamil Swobodzinski stated that “Pilote Films over the course of the last twelve months has once again distinguished itself through its exceptional commitment,” and added: “With this award, we would like to recognize the extraordinary work of Bettina Hülsmeyer and her team and congratulate them warmly on their achievements.”