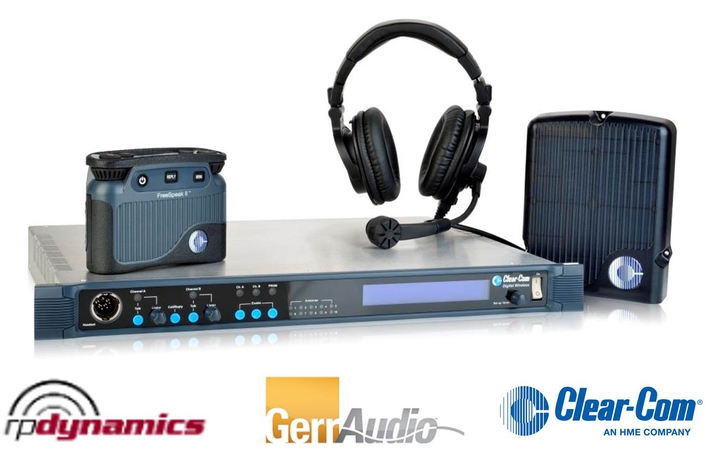 RP Dynamics is now renting FreeSpeak II systems either as standalone wireless intercoms or in combination with a Clear-Com Eclipse-HX Matrix digital intercom frame, with up to 15 FreeSpeak II programmable beltpacks.

With its ability to support up to five separate channels per beltpack, providing complete roaming coverage using multiple antennas, the FreeSpeak II standalone and FreeSpeak II Integra (integrated Eclipse HX combination) is head-and-shoulders above the typical partyline intercoms offered by most equipment rental firms. When combined with the unbelievable flexibility of the Eclipse-HX Digital Matrix Frame, the result is a wireless intercom system with connections to well over 16 partylines and the flexibility to seamlessly cover difficult buildings and remote zones – fulfilling the intercom needs of any broadcaster or event planner.

“We recently deployed a Clear-Com Eclipse-HX matrix intercom to the Rogers Sportsnet hockey TV coverage facility at CBC Toronto’s downtown studio,” said Christie. “We had such success with Clear-Com’s earlier model, the CellCom wireless intercom system, in achieving complete RF coverage throughout this 11,000 square foot studio that we jumped at the opportunity to purchase the FreeSpeak II system when it became available, because our customers deserve access to the very best and the most flexible wireless intercom systems on the market today.”

“Any event with four or more channels of typical 2-wire intercom quickly becomes an unruly mess of hiss and ground loop buzzes,” Christie added.  “The Eclipse-HX eliminates all of that instantly and adds a significant degree of control to the flow of information.  More people can talk to each other directly without interrupting other show operations.”

“RP Dynamics’ decision to provide the Canadian AV, broadcast and production market with a high-end flexible solution like the FreeSpeak II on a rental basis provides these clients with a quantum leap improvement in intercom capabilities,” said Geoff Maurice, Product Manager with Gerr Audio. “RP Dynamics can now offer an unmatchable level of quality, performance and coverage to their customers.”

“Although we have only recently purchased FreeSpeak II, it has quickly become one of our most popular rentals,” Christie concluded. “Once our clients learn how much more control and flexibility it gives them, they never want to go back to conventional partyline intercoms.”