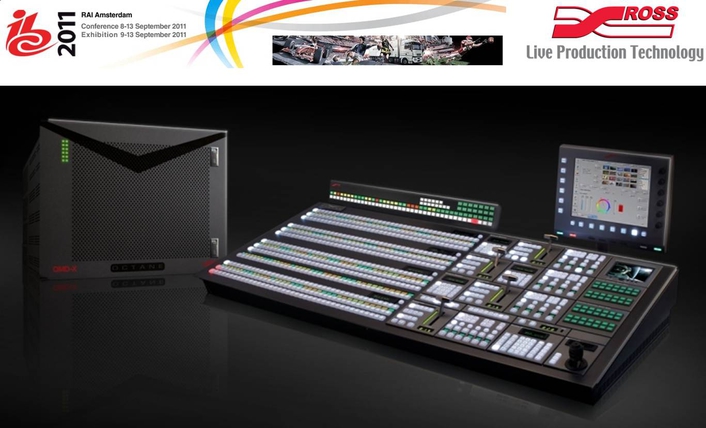 Ross Video will show the latest in television live production and infrastructure solutions at IBC 2011in Amsterdam. All product lines will showcase their advancements on Ross’ newly expanded IBC stand. Be sure to stop by stand 9.C20, to see these exciting new developments as well as one or two last minute surprises.

Initially introduced at NAB 2011, the new Carbonite mid-size switcher series has received awards and accolades confirming its highly affordable ground breaking design. The Carbonite series offers 1 & 2 MLE variants with 16 or 24 inputs and an unmatched feature set. The new Multi-Definition 2RU production engine at the heart of Carbonite offers a level of operational power and flexibility previously only found in much larger and more expensive switcher systems. The browser based MulitUserGUI that comes standard with Carbonite offers unprecedented – platform independent management of media stores and switcher controls from PC, MAC or iPad – yet another Ross first!

Ross ‘Studio Systems’ are an integrated package of the core production tools required for a live production. Ross is unique as the only manufacturer to have production switchers, character generators and video servers all together in their product portfolio. This unique strength has led to the creation of CrossOver, Carbonite & Vision Studio Systems – Affordable Compelling Live Production Studio packages.

IBC is the European debut of CrossOver Solo; the perfect compact switcher for space restricted applications and limited budgets. Based on the highly successful CrossOver 12, the Solo has the same features and specifications; however the main electronics and signal I/O are combined with the panel as a single unit - reducing cost and size. CrossOver is a 1 MLE production switcher with unmatched performance, ease of use and flexibility. 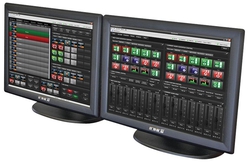 QuickTurn provides a solution to getting newscast content quickly to the web.  It provides tools in the news room editorial system to identify and names web segments.  As the production airs, these segments are individually pushed to the web.  This saves valuable time and effort in getting time sensitive news content to the web faster than the competition. 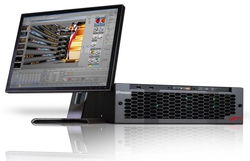 The industry’s hottest live graphics platform gets even better at IBC 2011 with powerful new workflow tools, support for additional NLE and NRCS partners, a new entry-level system, and live demonstrations of XPression VS, Ross’ virtual set system, on the show floor.

Workflow is critical in today’s distributed graphics environments, and XPression’s new workflow tools take graphics from creation all the way to playout without skipping a beat.  The XPression Project Server is a game-changing collaborative creation and media distribution product that allows users to share projects and move media within a facility or across an entire enterprise.  Ross has also joined forces with best-of-breed asset management company and openMAM partner, MediaBeacon, to provide tightly integrated, closed-loop asset/order management for XPression.  And, the XPression Remote Sequencer gives operators the ability to control an unlimited number of XPression systems or channels in a MOS environment from a single location.

XPression Prime is a new lower-cost version of XPression Studio, still capable of delivering stunning looks to productions, but with a streamlined feature set designed to fit into tight budgets.  And, XPression VS adds camera tracking, in addition to “trackless” functionality, to virtual set environments with XPression partner, Unreel Pictures.

SoftMetal v4.5 software will be showing at IBC. Both the SoftMetal 1000 and 3000 Series Video Servers benefit from this new software release which adds a variety of features and bug fixes including reverse looping, automated recovery mode under automation control, Media Manager channel lockout and spanned media volumes among other enhancements.  Version 4.5 also adds support for the Snell Morpheus Automation and Media Management system.

openGear,  the industry standard platform of choice, continues to grow offering the unique opportunity to select product from a range of technology leaders without requiring multiple frame standards. The platform now offers “openGear Connect”, allowing any TCP/IP enabled product to be fully integrated into DashBoard, while DashBoard 4.0 offers a new plugin, enabling User Rights and Management, configurable users and groups, with read/write access rights down to individual card parameters.

Ross Video expands the openGear portfolio with the introduction of the LDP-8242 Loudness processor that actively and automatically manages and corrects loudness level changes in the audio content using the Linear Acoustic AEROMAX algorithms.  A range of Dolby processing solutions had been added that include an audio multiplexer, and an audio demultiplexer with Dolby decoding for Dolby E and Dolby Digitial and a frame synchronization series with DolbyE and Dolby Digital decode and encode. A new Nielsen Watermarks Encoder will be shown, a modular solution that comprises a 16 audio channel, 3 Gb/s processing core incorporating the new Nielsen Watermarks.  A range of metadata solutions, closed captioning monitoring and transport stream conversion and monitoring products will be also be on display. Ross metadata products allow insertion, extraction and monitoring of data in the HANC/ VANC space, such as SCTE-104 triggers, CC, AFD, GPI and Timecode. Transport stream products offer ASI/310 conversions, monitoring and reporting of ASI stream health and SCTE-35 trigger detection. Caption monitoring with the CDP-100 verifies CDP’s for compliance to SMPTE 334 with error reporting and logging of any variances.

Ross now offers a range of 1RU solutions for HD/SD data and closed captioning insertion. The TES series has the ability to insert and extract several data services simultaneously, such as CC, audio metadata, subtitling, and OP47. A transparent mode of operation is offered for the insertion of other data types into an HD/SD signal.

The Ross Fiber line continues to expand with the addition of DWDM, setting a new standard by doubling the current capacity available on the market. The combination of a C band MUX and an L band MUX/Combiner offers a total combined capability of 80 signals on a single fiber. Ross’s Breakthrough Pricing continues with the UDC-8625 multi-function solution for Up, Down, Cross conversion, Keying, Logo Insertion, A/B mixing, all with audio video timing, processing, and synchronization at only $3,495 USD. 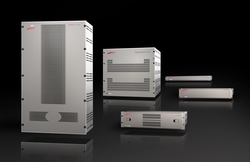 At IBC 2011 Ross Video will expand on the NK Series Routing System with the release of Resource Management on the NK-VRC virtual routing core and the addition of Jupiter ES Switch protocol on the NK-3RD third party interface. The latest version of the software on the NK-VRC virtual routing core allows users to manage and control routing to and from external resources, such as format converters and tie lines, connected to one or more NK Series router. Resource management enables operators to seamlessly switch between sources of different formats in the same router (i.e. 3G, HD & SD SDI) or across multiple routers (i.e. analog and digital audio) using NK Series control panels and interfaces, simplifying day to day operations.

The NK-3RD third party interface now adds Jupiter ESswitch protocol in addition to the currently supported ProBel SW-P-08 protocol, expanding on the capability of the NK Series Routers to interface to other routing and control systems.