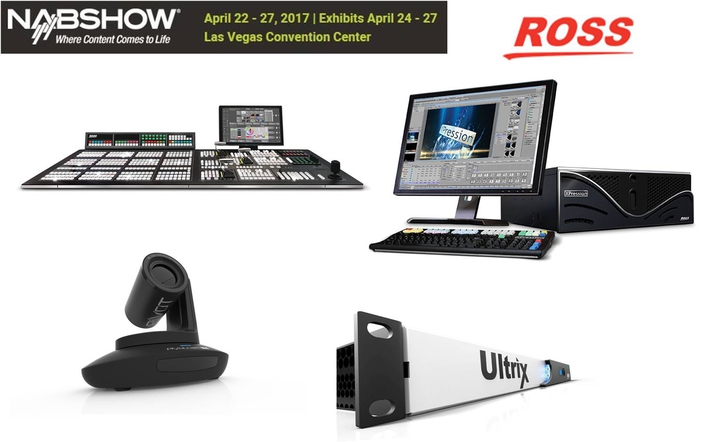 Ross Video announced today that it is planning yet another block-buster NAB as one of the anchor exhibitors in the Las Vegas Convention Center North Hall with a 9100 square foot booth packed with the latest live production technology.  Following the theme of Smart Production, Ross will be showing how its technologies, services, and expertise can help customers achieve their creative, business, and technical goals.  Ross displays at NAB will be a creative playground, showing the latest in complete systems and workflows for Virtual Sets, Automated Production, Graphics Creation & Playout, News Editorial, Stadium Display Production, Assembly Meeting Production systems, and more.

Every Ross product family is bringing significant new product enhancements and major new product introductions to NAB this year.  The scientists, engineers, and creative teams at Ross have been busy – the following is just a preview of some of the exciting things that will be on the booth this year.  There will be more exciting announcements closer to show time.

LiveEDL is great for “live-to-tape” productions. In LiveEDL mode, Acuity tracks source selections and creates a timecode locked edit decision list.  This can then be exported as a file and imported to a non-linear editing system (NLE) along with camera iso-recordings, recreating the line cut in the NLE.  Final changes are then easily made, saving massive amounts of time in the post-production process.

The new Soft Panel for Acuity provides full setup and operation from a graphical web user interface.  This means the cost and space of a physical panel is no longer required, often desirable in automated environments like when deployed with Ross OverDrive Automated Production Systems.

Carbonite, the world’s leading mid-sized production switcher adds v12.2 software.  This brings support for the compact CB9 panel which can be added as a second control panel to a Carbonite for two panel operation.  Other features included with 12.2 are MiniME preset, for enhanced UHD 4K production, support for the1080P25 signal format, and intuitive new thumbnail capture for media wipe selection.  V12.2 software will be available at no charge to all Carbonite customers and made available to download from the Ross Video website.

Carbonite Black Solo adds v1.2 software, simplifying complex tasks such as keyer setup and panel layouts, and adds the Ross patented RGB PanelGlow that provides background illumination to make buttons easily readable in dark environments as well as enabling button color customization that allows the system to be personalized for at-a-glance color identification of busses and sources.  As with all Ross production switchers this new software will be downloadable at no charge from the Ross Video website when available.

IP inputs and outputs are now supported with SMPTE 2022-6 and SMPTE 2022-7 available (and shipping) on XPression Studio, XPression BlueBox, and XPression Clips systems. Support for video over IP workflows on XPression is available through a variety of hardware vendors, including AJA and Matrox.

Video Servers and Replay
New since last NAB is the acquisition by Ross of Abekas, an iconic industry brand.  The Abekas brand is being retained as the brand for Ross’ family of video servers as are all Abekas products.

New and shipping prior to show time is the Abekas Tria 2.  The Tria 2 is the next generation Tria clip server, a full 2 channel clip server with an input record channel, synchronous playback of key/fill pairs or independent playout of 2 separate video channels with audio. Tria 2 uses fast, high reliability Solid State Drives and is available with several drive capacities.

The Abekas Mira now includes Mira Connect Gigabit Ethernet networking, which enables   and Mira Replay systems to seamlessly share content between servers. There is no need to cache or transfer files as they are streamed on demand across the GigE network making it seamless to play a clip residing on one Mira to the output of a different Mira.  This is a great way to scale your production replay team by adding more Miras and operators while making content easily available to all systems.

XPression Clips production clip player adds a number of new customer requested features. Server output channels now have a Preview Channel which is used to cue the next clip while the channel is still in use, and an Auto Cue function that automatically cues and plays the preview clip on the channel output when the current clip is finished.  This added functionality enhances the ability for operators to randomly cue and play clips in a live environment within a single output channel.  Another nice addition is a progress bar that adds both graphical and numeric indications of the time remaining in a clip.  A time saver in production preparation is the ability to quickly Save a Still from any point on an existing clip in the Clips database and add it to the Clip Store.

XPression’s INcoder transcode engine now passes original timecode from source clips, which can be read and displayed in XPression Clips server channels. As well, users have new options to assign Recall IDs to assets during the INcode process making it a smoother process for customers with multiple productions and studios to manage clip IDs reducing confusion and errors.

Frontier Virtual Set System
The new Frontier Virtual Engine from Ross is built using the Unreal Game Engine, bringing photorealistic rendering, particle systems and physics to the broadcast virtual set, enabling a new level of creativity and further blurring the line between real and virtual environments.  Shown as a technology demo at IBC, Frontier has been developed in partnership with The Future Group.  This is a must see at NAB this year.

Ross routing solutions adds new control panels, the new RCP-QE Series remote control panel offers 18 or 36 colored backlit graphic LCD keys with multiple menus, enabling users to easily navigate through the system with just a few keystrokes. These routing control panels are ideal for use in OB vans and production houses where configurations change regularly.  They are equally useful in studios where unlimited configurations enable fast and simple customized setups of each panel.

Detour is the latest GearLite standalone signal processing product with a 12G Re-clocking DA (1 x 4) and Relay Bypass. It provides both 12G signal distribution and on-air failsafe operation in the event of power failure or primary input signal loss. It is capable of supporting SDI data rates from 270Mb/s up to 12Gb/s. DVB-ASI and MADI signals are also supported, making it easy to use in a variety of applications.

Robotic Camera Systems
Ross robotic camera systems introduces a new pan/tilt head; the VR100. The absolute encoding technology of the VR100 makes it ideal for VS/AR applications in which the virtual objects must precisely match and track real-world images. The strength and rigidity of this head are significantly enhanced to support payloads up to 20 kg (44lbs), eliminating the need for an extra support arm. The VR100 accommodates small and medium-sized teleprompters, making it the perfect solution for compact virtual sets or practical sets with augmented reality.

Cameras
New since last NAB is the PIVOTCam compact PTZ camera from Ross Video designed as a view point camera, for small studios, legislatures and meeting rooms.  The PIVOTCam 20 is now available with 1080p format support and a 20x Olympus lens.

Lightning Control System (LCS) for Legislatures and other Assembly Meetings
Lightning is the new name for the Control System formerly known as LCS from Ross, which was originally designed to meet the needs of efficiently producing legislature broadcasts and recordings. The name Lightning highlights how this modern, fast, and powerful production solution has grown and now addresses a much broader range of applications including corporate, house of worship, education, live events, and news broadcasts.

Lightning continues to add more new features with v5 launching at NAB.  One new feature makes it easier to use picture-in-picture functionality that makes it possible to have a presenter’s slides and face on screen at the same time, or to broadcast a discussion between representatives in the room instead of constantly switching sources. Version 5 offers support for the new PIVOTCam pan-tilt-zoom (PTZ) cameras from Ross, as well as cost effective USB joystick control of cameras.

DashBoard Facility Control
The DashBoard Facility Control System from Ross, will show v8.3 with expanded Visual Logic capability to permit users to create their own device APIs right from within DashBoard. It adds support for USB human interface devices such as joystick controllers and custom keyboards as well as an expanded control library of devices including Panasonic and Hitachi box cameras and Ross ACID cameras. Version 8.3 also adds a Proxy server to make connections to devices at distant locations more efficient.  Check DashBoard out at NAB or by downloading it at no charge from the Ross Video website.

Rocket Surgery
Rocket Surgery, Ross’ creative services team provide broadcast and stadium graphics creation, virtual sets and augmented reality services.  “The Rocket” has been providing enhanced augmented reality for NBC’s Sunday and Thursday Night Football on the Ross XPression graphics platform, controlled via Ross DashBoard Custom Panels. This season they  added AR integration with Skycam and SMT.  By being able to receive and translate a live feed from Skycam’s Aerial camera system through telemetry data from SportsMEDIA Technology (SMT), virtual and augmented reality cable-cam data is manipulated for stunning, full fly-through animation in a live environment. Using a custom DashBoard control interface, AR elements can be placed anywhere on the field of play within seconds, making this an ideal setup for a variety of live production environments.

Rocket Surgery now offers virtual set design for the new Frontier Virtual Engine from Ross, which uses the Unreal Game engine to deliver the next level of realism to virtual environments.  The Rocket will help Ross Frontier clients get the most out of their system, pushing new creative boundaries.

All Ross products adhere to our philosophy of Smart Production – they work together seamlessly and integrate tightly with third-party solutions, helping our customers meet their business, technical and creative goals.

Ross Video has offices around the world and 24/7/365 technical support is included in the price - even for products bought on eBay. Ross employees are authorized to rent helicopters when necessary.