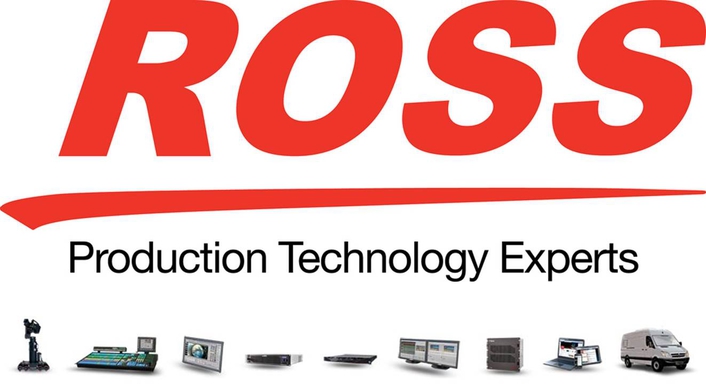 Devotion to a superior customer experience remains the same
After 40 years, Ross Video begins their “Ruby” Anniversary with an updated look that includes a new corporate logo and new tagline - ‘Production Technology Experts’.  The updated logo and tagline are designed to better represent the reality of the new Ross Video – and its dramatically expanded product portfolio and global footprint.

“We are very proud of our past, and the original Ross logo,” said David Ross, CEO, Ross Video. “With our new logo we wanted something bold and fresh while still immediately recognizable as Ross.  The logo was evolved from the original with the Ross name remaining front and center. My father and Ross founder, John Ross, signs his name with an underline, and the stroke under the logo represents his signature as well as the forward momentum that began back in 1974 when he sold his airplane to raise the seed money to start this amazing company.”

“Ross is a leader in so many areas of production technology now,” continued David. “We are known for graphic systems, automation, control systems, infrastructure products, robotic camera systems, social media management, newsroom systems and most recently, mobile video production with the acquisition of Ross MCP. It was time to recognize all these changes with an updated look – while also recognizing a big milestone - Ross’ 40th anniversary.  We took our time, 6 years, in exploring what our new logo should look like. Thousands of design samples and refinements later, we finally arrived at something we feel is just right.  It is simple, yet sophisticated - representative of where Ross is at today and where we are headed into the future.  We hope you like it.”