.
London’s Olympic Stadium has become the jewel of London during this year’s Olympic Games and every broadcaster wants to have the stadium, or other elements of Olympic Park, behind their anchors while they record their coverage of the 30th Olympiad.

Studio space around the stadium is limited, so broadcasters began looking for alternative solutions. The BBC for instance leased the roof and 22nd floor of a local office building and Al Jazeera built a studio on top of a 24 story apartment building because “they liked the view.”

After going out of their way to make sure the imagery behind their anchors is perfect, broadcasters from around the globe needed to make sure the windows of their studio aren’t blown out by the brightness of the exterior light. Some studios, such as Telemundo turned to simple products like Rosco N.6 Roscolex Acrylic Panels. 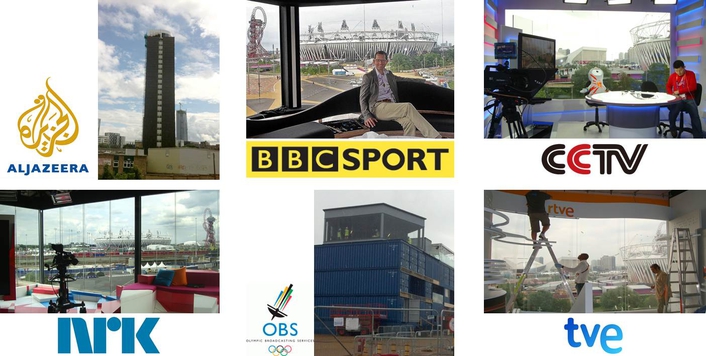 The best example of this was in Norway’s NRK Broadcast Studio that built their studio on top of scaffolding rising over four stories high. They installed 13 Rosco VIEW panels into their scaffold-top studio and had three cameras outfitted with Rosco VIEW Camera Filters. NRK sent a skeleton crew to operate the studio, opting to control most of the lighting, sound - and yes, even the Rosco VIEW - from the studio in Norway. The Rosco VIEW GUI (Graphic User Interface) allows the control room to network with the Rosco VIEW Camera Filter Rotators - allowing them to control the brightness of the windows in their studio from over 1,000 miles away!

One of the most remarkable achievements by broadcasters at the Olympics was the Olympic Broadcast Services TV Tower - a series of 10 studios manufactured out of sea-freight containers! The OBS TV Tower is comprised of 104 40’ sea containers: 18 sea containers at ground level rising 9 sea containers high with the 10 broadcast studios positioned on top two “floors.”

Each studio inside the OBS Tower is two containers wide and comes with windows that look out onto London’s Olympic Park. However, each of the incoming broadcasters leasing those studios were left to their own devices in how they would address the overpowering brightness coming through the windows in order for their viewers to see the Olympic-scape in the background. Some studios opted for good ol’ fashioned gel, some chose N.6 Roscolex Panels - but four of the ten studios in the tower chose Rosco VIEW.

Just as the Olympics give athletes a chance to show the world their abilities every two-years, they also give television professionals a chance to create innovative solutions to issues of window and light control. For the 2012 Olympics, most of the gold medals in this area appear to have been won by Rosco for its Rosco VIEW.