The switcher was first used on ‘The Resort’, a 6x60min series produced by Twofour and GroupM Entertainment for ITV2, following teenagers on their first foreign holiday away from their parents. The four-week shoot took place in Magaluf, Majorca.

Roll To Record provided all technical facilities, including the new switcher as part of its small-scale rig set-up, and technical staff that rotated over 22 hours on two shifts, providing unit management, engineering and sound support on site. Back-up support was also on hand back in the UK. 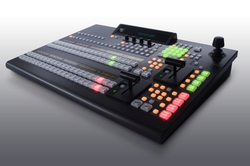 Mick Bass, Commercial Director, Roll To Record, said, “The new FOR-A switcher is a valuable addition to our inventory, enabling us to offer technical facilities for productions of any scale. It proved its worth on ‘The Resort’, where we needed transport and set-up to be as easy and quick as possible, without sacrificing functionality.”

Roll To Record previously worked with Twofour on the award-winning observational documentary ‘Educating Essex’ for Channel 4, and the recent Sky 1 HD programme ‘The Angel’.

ABOUT ROLL TO RECORD
Roll To Record has been providing semi-permanent broadcast studio installations and robotic camera systems for reality television, game shows and entertainment series for over 20 years. It works with the UK’s leading production companies and broadcasters to create some of the most pioneering and memorable shows of our time. Credits include The Angel, Educating Essex, Big Brother, Ben 10: Ultimate Challenge, New Look: Style the Nation, and Saturday Kitchen. Roll To Record is an NEP Broadcast company.