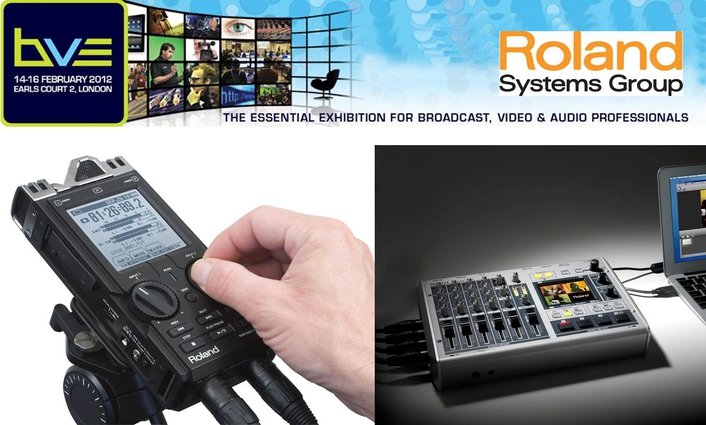 The full product portfolio from Roland Systems Group includes a range of professional audio and video equipment
Roland Systems Group (RSG) UK will showcase their flagship standalone and portable recording products as well as the popular web streaming capability of their latest products including the VR-5 AV Mixer, the recently launched VR-3 AV Mixer and the VC-30HD Video Converter  at BVE (stand number B-40). The award winning R-1000 dedicated 48 track audio recorder/ player which provides an efficient 48 channel solution for live recording/playback and sound check will be on show alongside the R-26 portable hand held recorder, which has some unique features that will appeal to all professionals including HD-SLR users, hi-tech music users, broadcasters, videographers and wildlife enthusiasts.

R-1000 48 Track Recorder and Player & R-26 Portable Hand Held Recorder
Designed to work with the Roland V-Mixing System in any live event or production, the R-1000 is ideal for virtual rehearsal, playback and video shoots. It can also be used with any digital console with a MADI output via the Roland S-MADI REAC MADI Bridge. Based on REAC (Roland Ethernet Audio Communication), the R-1000 eliminates the bulk and noise susceptibility typically associated with analog snakes and replaces it with Cat5e/6 (Ethernet/LAN) cable. Recording up to 48 tracks of 24-bit audio in BWF format, its removable hard drive ensures smooth integration with DAWs and allows approximately 20 hours of recording (44.1/48 kHz) using a 500GB HDD. Multitrack playback (48 tracks of 24-bit audio via REAC) is also provided, while a marker function enables playback at any designated point. Data can be loaded from external devices and analog monitor and headphone outputs are provided, along with USB ports for backing up data and connecting a PC or Mac for further software control, plus the unit is easy to integrate into any video shoot by virtue of the timecode, black burst and word clock inputs.

The R-26 heralds the next generation of hand held recorders from Roland with features such as dual stereo mics, six channels of simultaneous recording and three channel IARC (Isolated Adaptive Recording Circuit) - as well as impressive ergonomics - the technically advanced R-26 offers superior detail and depth.  For ease of use, added benefits include onboard editing, a touch panel display and a USB audio interface for your PC, making the R-26 is an ideal solution for the stage, rehearsal, school or boardroom.

The dual stereo mics on the R-26 (omni-directional and XY directional) operate independently of each other to provide the ultimate flexibility for different recording applications. As a powerful tool for professionals, in addition to the onboard mics, the R-26 provides XLR/TRS inputs for up to six channels (three stereo) of simultaneous recording.  This useful feature allows the user to, for example, capture an instrument up close with the built in mics, record room ambience with external mics and save them as separate files for mixing together later.  To reduce interference between inputs to achieve clear, high quality sound, the R-26 is equipped with Roland’s proprietary IARC on both the inputs for the built in mics and the external inputs.

VR-3 AV Mixer and VC-30HD Video Converter
Combining the power of Roland’s audio and video technology into one unit, the VR-3 is a fully integrated 4 channel audio mixer and video switcher designed for live production and web streaming.   Similar to the Roland VR-5, the “all-in-one” design of the VR-3 greatly simplifies production and streaming by incorporating a video switcher, audio mixer, preview monitors and streaming-ready USB output all in a compact, single unit.  As a USB Video/Audio class device (for web streaming or recording with a PC/Mac), web streaming is effortless by simply connecting the VR-3 via the USB port to a computer which is running a live streaming service such as USTREAM.

Ideal as a capture solution for NLE’s on both Mac and PC platforms for pulling in source material from almost any device, the VC-30HD can be used to convert audio and video content for web streaming applications or archiving and content to Blu-ray.  As a multi-input video converter and encoding device the VC-30HD accepts HDMI, Component, composite, S-Video, Firewire, and analog or digital audio via RCA, XLR, and AES-EBU. The VC-30HD can also convert to DV, HDV, or MPEG-2 formats.  The VC-30HD combines audio and video sources together and encodes to both a Firewire and USB stream simultaneously - making it an ideal solution for archiving to Blu-ray while at the same time webstreaming through a video streaming service on a PC/Mac.

The VR-5 5 Channel AV Mixer is a stand-alone recording and live streaming unit which, since its launch in mid 2011 has proved to be a ‘must have’ for live events and portable applications.  Packed with useful features such as built in dual touch monitors, three video layers for two video sources plus DSK and a built in scan converter for PC input, the VR-5 is also a USB Video/Audio Class Device.  TheVR-5 has the capability to record directly to SD memory card.