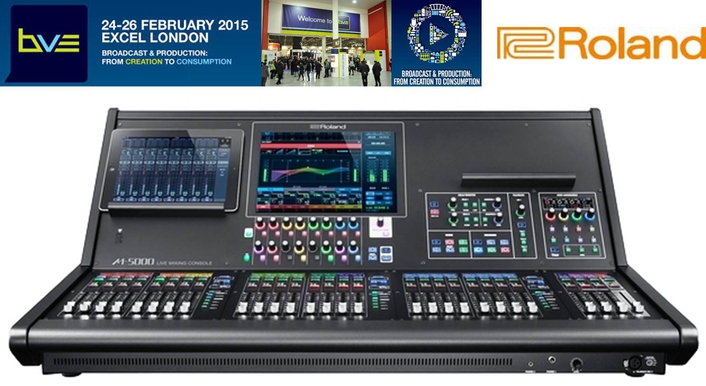 Visit Roland at Broadcast Video Expo – D16
The next generation live sound digital mixing console from Roland – the M-5000 – will make its debut to the UK market at Broadcast Video Expo (stand D-16).  This groundbreaking console is based on a brand new operating platform from Roland that provides more adaptability to individual workflow than any previous option. The platform, known as O.H.R.C.A, stands for three key concepts: Open; High Resolution; and Configurable Architecture. This combination adapts to the needs both of the application and the operator by delivering 128 freely definable audio paths, an extremely flexible user interface, expandable protocols and multiple-format I/O choices. All paths are delivered at a pristine 24-bit/96kHz sound quality.

The key to the Roland M-5000 Live Mixing Console’s internal architecture is that it is not fixed to any configuration. It can be freely defined within a range of up to 128 input or output channels or busses, allowing the operator essentially to ‘build’ a console to suit the application. Each path can be used as a mixing channel, AUX, matrix, subgroup buss or MIX-MINUS buss in any input/output configuration. One primary application might be for the monitor position, where a high number of auxiliary busses are needed. But the M-5000 is equally at home at the FOH position for live music in touring, theatre, broadcast and more.

The network options are equally versatile. In addition to two REAC (Roland Ethernet Audio Communication) ports, the M-5000 has two expansion card slots to support a range of system configurations and audio transport protocols such as Dante™, MADI, Waves SoundGrid® and other formats of the future. The back panel includes 16x16 analogue I/Os; 4x4 AES/EBUs; a 16x16 USB audio interface; connection for control via an iPad, connected or wireless; and control ports including footswitches, GP I/O, RS-232C and MIDI – enabling the console to see up to 300 inputs and 296 outputs, all at 96kHz. Furthermore, inputs can be patched to outputs independently of mixing channel resources.

The pliancy continues on the control surface. Workflow is above all user assignable, exploiting a 12-inch colour touchscreen, 28 channel faders in four groups, multifunction knobs and buttons, ‘selected knob’ functions and an entire user assignable section. Displays are bright, colour-coded and highly visible in any light. The built-in GUI is expandable via Mac and Windows remote control software to any portable device. 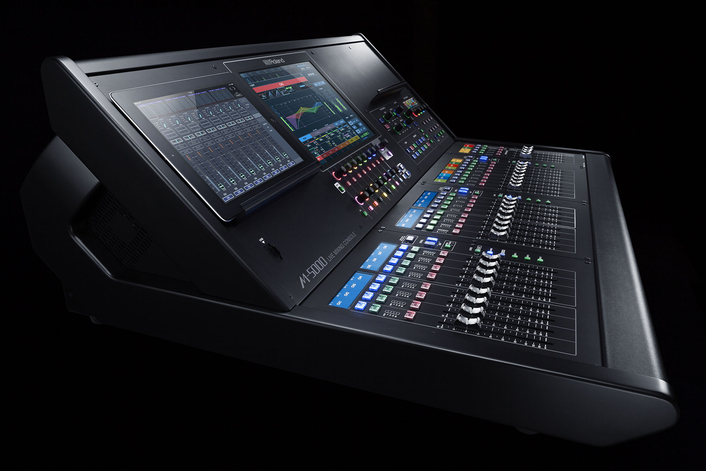 Naturally, the extensive family of existing Roland products integrates seamlessly with the new platform – knitting the M-5000 into thousands of systems already running worldwide. Scores of digital snake options already exist for I/O, but the Roland M-48 Personal Mixer offers a particularly powerful solution. Hybrid monitoring takes the lead performers’ mixes off the console busses in the traditional way, while the rest of the musicians use M-48 Personal Mixers. Connecting M-48 and M-5000 via the powered REAC port on the console, the engineer can seamlessly mix between those artists on aux busses and those musicians on personal mixers. Finally, the R-1000 48-channel Player/Recorder completes the family of devices fully integral with the M-5000.

In the rapidly changing world of live sound, the ability to adapt on the fly is sometimes the difference between a good show and a great show. The new M-5000, on the O.H.R.C.A platform, meets the demand for compliancy that professionals now expect.

Roland showcase XS Series of Multi-Format AV Matrix Switchers at BroadcastVideo Expo
The XS Series from Roland offers an adaptable solution for events or fixed installations - applications that require high-quality, integrated video and audio conversion and switching.  Available in three models: XS-84H (8-in x 4-out), XS-83H (8-in x 3-out) and XS-82H (8-in x 2-out) and is ideal for a variety of commercial AV applications including boardrooms, lecture theatres, 4K switching to 1080p, digital signage, stadia, auditoriums and teleconferencing.

With a truly multi format design, the Roland XS Series features eight HDMI, RGB/Component/S-video/Composite inputs and up to four HDMI or HDBaseT outputs with built in scalers to enable picture-in-picture, resizing, rotating, and flipping.  Audio can be embedded into outputs via 8 stereo audio inputs (2 mic) and/or HDMI audio as well as de-embedded on output. Additional features of the Roland XS Series include remote iPad control, EDID emulation for HDMI and RGB signal management and HDCP key master to maintain authentication information for each HDMI source.

Using the ‘Roland XS Remote’ iPad App, the switchers can be controlled remotely with an iPad, via RS-232C interface or over a network with a LAN connection.  This remote control option is beneficial where front panel controls are not accessible or a programmable touch control interface is required.

With built in Roland audio DSP technology, the XS Series offers sophisticated sound processing with eight HDMI audio inputs and the ability to accept eight stereo analog inputs as well.  For audio level adjustment, detailed settings can be configured by remote control from an iPad or external controller.  Volume levels can be monitored easily with a level meter display on each output.  Two channels of the XS Series feature mic level audio input whilst a built in ducking function can be used to lower the volume of other audio during mic input.  Each audio input has an internal high pass filter, 4 band equalizer, noise gate/expander and compressor. 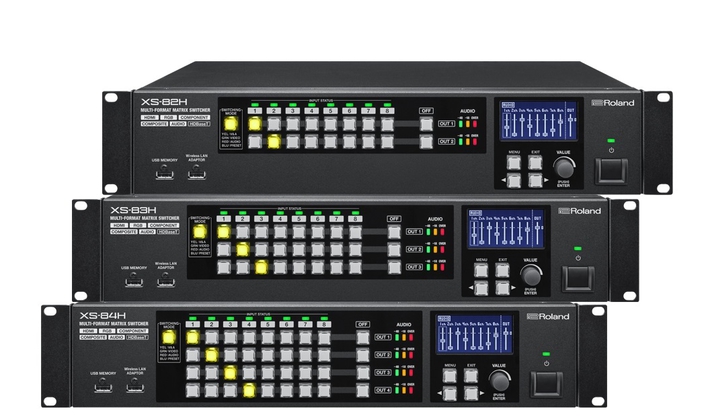 The advanced video processing features of the Roland XS Series make multiscreen video production possible for both digital signage and live applications. A single image can be scaled across multiple displays using the ‘SPAN’ mode and then easily switched to a different image on each screen by choosing ‘MATRIX’ mode. Each input channel supports adjustments for scaling, positioning and aspect ratio before output ensuring the best possible result. The ‘Preview Out’ function enables the user to check a video source before sending it to an output.

The Roland XS-84 is capable of switching four video sources as a group enabling the use of up to two 4K inputs. The multi-format capabilities allow the user to switch 4K, HD, SD, XGA and other computer formats up to 1920x1200 (WUXGA).

Ideal for users in multiple applications the Roland XS series can switch between and route HDCP video from computers, smart phones, Blu-Ray, and even still images from its internal memory to displays. With up to four HDBaseT outputs available, high quality, long distance transmission of audio and video content to displays throughout a venue or site can be easily achieved.

For teleconferencing applications, the Roland XS series features four internal busses each for video and audio. The switcher can be used to create minus-one audio to feed directly into existing teleconferencing systems and to switch up to eight computer and video devices in both analog and digital formats. A built in audio ducking function lowers other audio levels when microphone audio is detected making it ideal for conference or boardroom environments.