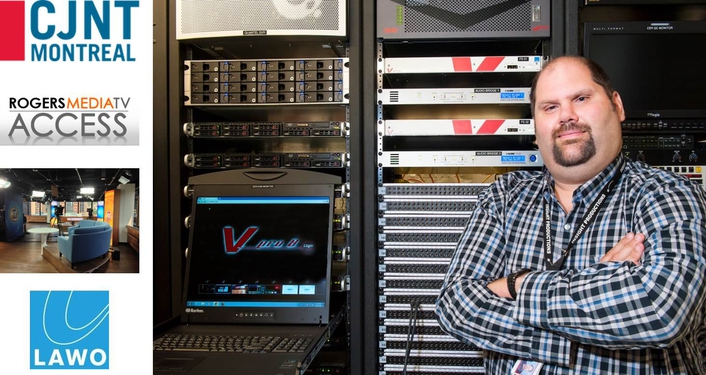 Effective tool for embedding, de-embedding, frame sync and more: Keith Beaulieu next to the installed V_pro8 systems
Lawo is pleased to announce the deployment of two V_pro8 video processors at CITY Montreal – (CJNT). CITY Montreal provides English programming with 15.5 hours of local content each week as well as a daily 3 hour morning show, Breakfast Television, and Montreal Connected, a weekly half hour sports program; all of which originate from the new production facilities in the heart of Downtown Montreal. CITY also broadcasts popular U.S. content such as Modern Family, America’s Got Talent, and Jimmy Kimmel Live. The new studio went to air on August 26th.

Keith Beaulieu, CJNT’s Director of Special Events - Technical Design / Manager of Engineering, discussed the station’s requirements and their reasons for selecting the Lawo V_pro8 systems. “We needed a product with the V_pro8’s functionality,” Beaulieu explained, “and the Lawo equipment not only offered us a compact and powerful solution, they provided features including two downmixers, web based viewers with proxy images, and MADI ports that enabled us to directly interface the new equipment with our audio network. They are already proving themselves to be a very important part of our broadcast / media production and distribution operations.”

The two new Lawo V_pro8 video processors are tightly integrated with a variety of products representing the latest technologies. The Studio boasts a Ross Vision switcher, XPression 3D HD CG & Motion Graphics System, NK Router, Sony Cameras, Quantel Editing systems, and WSI weather and traffic systems. These are some of the tools in the arsenal of equipment to be controlled under the guidance of the Ross Overdrive studio automation system.

According to Beaulieu, “The fact that this was a start-up operation and we required an efficient way to distribute, embed, and de-embed our audio signals in a cost effective manner, married with the fact that we also needed to process our video signals, made the Lawo V_pro8 series processors the logical choice. I’m not aware of any other system that has the power of the Lawo V_pro8. The system’s ability to downmix any incoming 5.1 audio feed to stereo was also a requirement and the V_pro8 handles this with ease.”

Reflecting on his first exposure to Lawo’s V_pro8 system, Beaulieu offered the following thoughts, “The V_pro8 is a spectacular new product that I knew was going to serve broadcasters well when it debuted on the NAB floor. It was the logical choice when CITY Montreal was being planned. The Lawo engineering team clearly put a lot of creative thinking into the V_pro8 and the implementation of its many features makes it the right product for our requirements. In terms of its productivity, the V_pro8 solution paid off immediately—enabling us to be cost effective in our planning without sacrificing any flexibility.”

With a production environment of this sophistication, quality technical support is every bit as critical as the performance of the equipment and, here too, Beaulieu was very pleased with Lawo’s customer / technical support services, “Even though the V__pro8 is really intuitive to use, Doug Smith, Lawo North America’s engineering manager, was always available to answer any questions we had. Lawo stood behind us every step of the way.”

With a myriad of new equipment installed and operational, Beaulieu says he is very pleased with the outcome of the station’s latest investments. “With our two new V_pro8 units in service, I’m pleased to report that I love them,” he said. “These processors are smart, intuitive, and flexible. I’m using them to primarily take feeds from external sources and time them into the video switcher, and I’m also using them to rip out the embedded audio to MADI. The ability to downmix in the same box twice per engine is a tremendous asset—it reduces a step that we would normally have to take with yet another piece of hardware. Then… being able to send that out over MADI… it’s pretty cool. The V_pro8 is a great solution for us and I am really happy with them... my employees who have had the opportunity to work with the product have found them to be real eye openers too!”

About the Lawo V_pro8
Lawo’s V__pro8 is a powerful video processor that is perfect for interconnecting signals of different video formats, as well as between audio and video. High quality cross format conversion, color correction plus embedding and de-embedding makes the V_pro8 compact and powerful. Modern high density audio connections, including RAVENNA and MADI, provide video-to-audio bridges within the studio infrastructure while a modern GUI based on HTML5 facilitates intuitive operation.