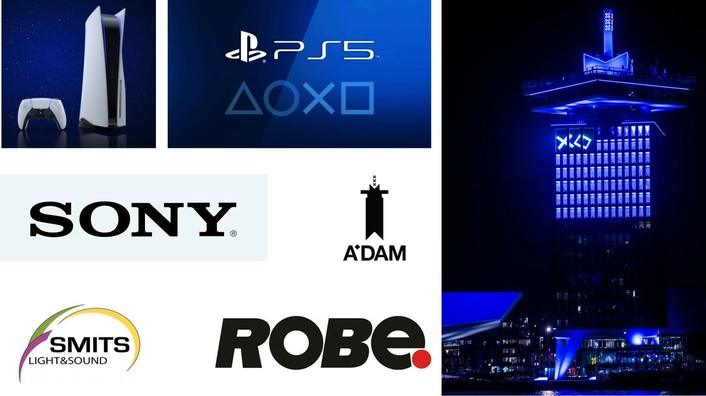 The buzz around the new Sony PlayStation 5 launch was unmissable in November as Sony HQ buildings worldwide exploded in a spectacular series of co-ordinated lighting and visual shows to herald the new flagship PS5 console. In the Netherlands, Hilversum-based technical production company Smits Light & Sound (SLS) invested in 100 x new Robe LEDBeam 150s to make up the 200+ Robe fixtures –including 172 x LEDBeam 150s – that were needed to complete an ambitious lighting scheme created by brand agency BAAS Amsterdam and SLS for the ADAM Tower in Amsterdam Nord.

The ADAM Tower (Amsterdam Dance & Music) on the banks of the IJ River in the redeveloped docklands area close to Amsterdam’s famous central station is a vibrant creative hub and a well-known local landmark.

It was the first time that Jeroen Smits and his SLS team had lit the 100-metre-tall building which has stunning panoramic views, and he specified the LEDBeam 150s together with 30 x Robe Pointes, 12 x Robe BMFL WashBeams and other fixtures together with over 100 square metres of 5mm LED screen. 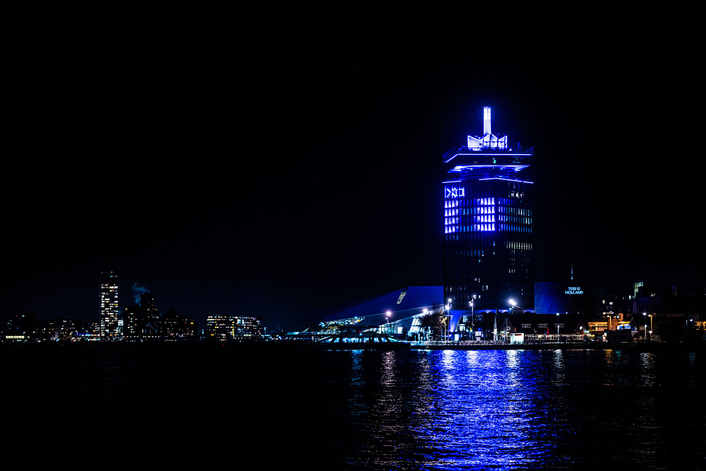 The 172 LEDBeam 150s were placed in the individual window spaces of the building’s top seven floors.

Each fixture was enclosed in a white box created utilising approximately 400 metres of pipe-and-drape system covered in white poly-satin curtain fabric, chosen for its reflective properties when combined with light. 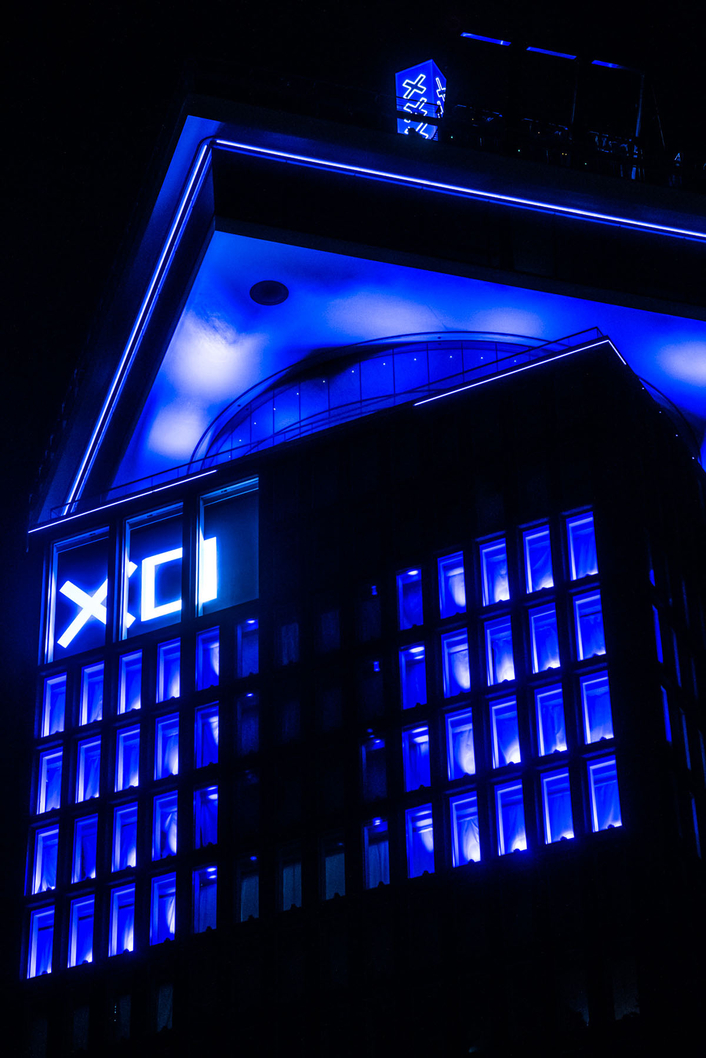 The challenge here involved accessing all the windows which are in space occupied by several different companies, a process that took several days with much of it having to be completed over the weekend to minimise disruption. In the daytime, the offices that were open had to be able to continue being functional.

Each of these 172 LEDBeam 150s was pixel mapped via an ArKaos media server running into the grandMA console.

“LEDBeam 150 was a perfect light source for this application,” commented Jeroen, explaining that he also made the purchase to boost SLS’s stock generally as it is such a “convenient and useful small fixture” to have on hand.

Very fortunately, due to the diversity of their client base, several of their projects have gone ahead and SLS has been busy throughout the pandemic period.

The 30 x Robe Pointes were positioned on top of the building. “We needed really bright beacon-like beams – obviously – and the Pointe was again ideal for the job,” he stated.

The 12 x BMFL WashBeams were deployed on the ground – six per side – to shoot up and illuminate the building. With their massive power and punch, it was another easy choice.

The LED panels filled the six large windows right at the top of the building. The custom video content – supplied by Sony PlayStation – offered an element of choice, so each international PS5 launch event could opt for the sequence and graphics that best fitted the shape and geometry of their building and visual design.

The video graphics and content were run via another two ArKaos media servers and were the epicentre of the show, with all the lighting – in the PS5 signature colours blue and white – acting as visual support, so this informed all the lighting programming. 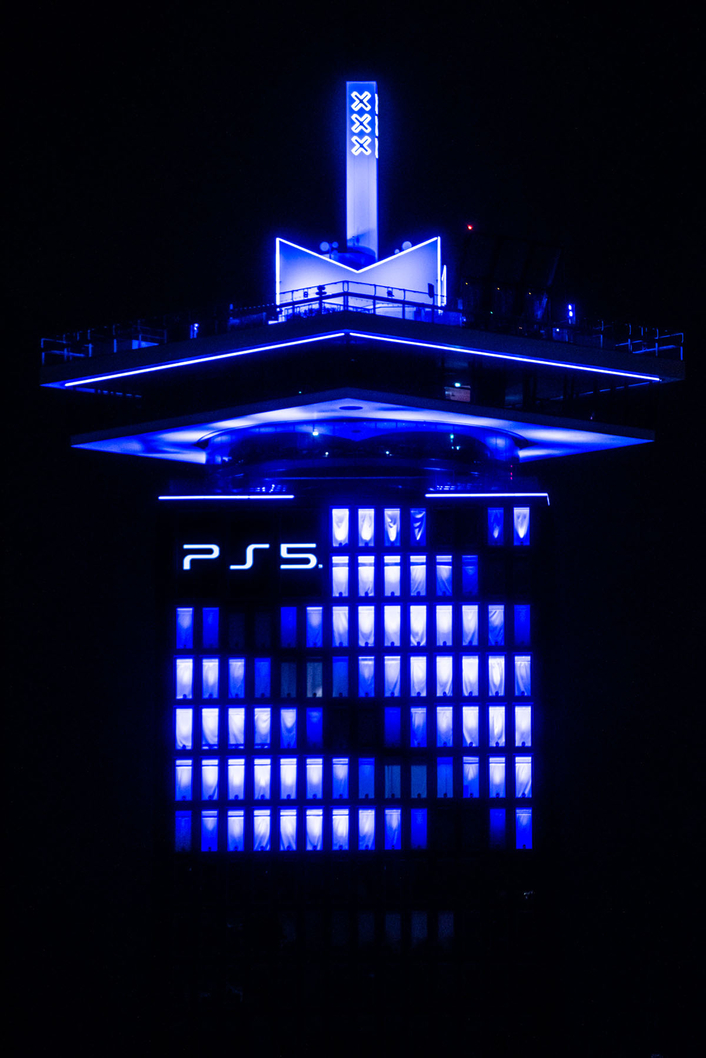 The rigging process for this Netherlands event started on the Friday before the Wednesday evening show reveal, and while that was happening on site, the lighting cues had been programmed in advance on a WYSIWYG visualiser, as there was no rehearsal time, and everything had to be spot on for the first show! For the show, the control position was inside the building, so programmer Thim Ijzerman was effectively ‘blind’ using the WYG system as his reference. Thim and Jeroen produced the design together along with the technical planning for lighting and video.

The Wednesday night show went without a hitch and was the official PS5 launch in the Netherlands. For the next two nights, the window lighting and video stayed in position and the show ran for two more evenings without the exterior lights.

The new LEDBeam 150s were delivered by Robe’s Benelux distributor Controllux. SLS started investing in Robe in 2015, a process that has continued steadily ever since. “It’s a great brand for a rental company, the products are premium quality, stable, reliable and very popular generally in the market.”

SLS is a full production service and rental company founded by Jeroen in 2006.