.
Four of Robe’s unique Cyclone - LED wash light with an inbuilt DMX-controlled fan - fixtures were in action on the most recent gigs by hugely popular UK indie rockers, The Kaiser Chiefs, which were the final dates of a UK arena tour that saw the band ride high on the success of their fifth studio album ‘Education, Education, Education & War’.

The stage visuality was a carefully crafted collaboration by Show Designer Rob Sinclair and Lighting Designer Ali Pike, both of whom have worked for the band since 2013. The four Cyclones were supplied to the tour by special effects specialist BPM-SFX.

The four Cyclones were positioned two per side on the downstage edges of the stage. Rob explains that the band wanted to make some big statements in the arenas, and with a limited number of shows, they needed to “Be clever” with how they utilised the lighting fixtures.

Looking for a different and innovative ‘reveal’ sequence, Rob flaunted the idea of a smoke-screen of quick-dissipating fog from the pit area … from behind which the band would start playing at the top of the set.

Eight Look Solutions ORKA machines were positioned along the front of stage to produce the blanket of fog, with the Cyclones employed to guide and move the smoke and light it at the same time.

The band’s intro was a soundscape of grim battlefield effects, and the Cyclone’s internal effects also happened to produce a very authentic machine-gun muzzle flash effect!

In addition to the set intro, Ali found them extremely useful as pan/tilt-able fans, and they also assisted in blowing confetti around the room when that effect was triggered. 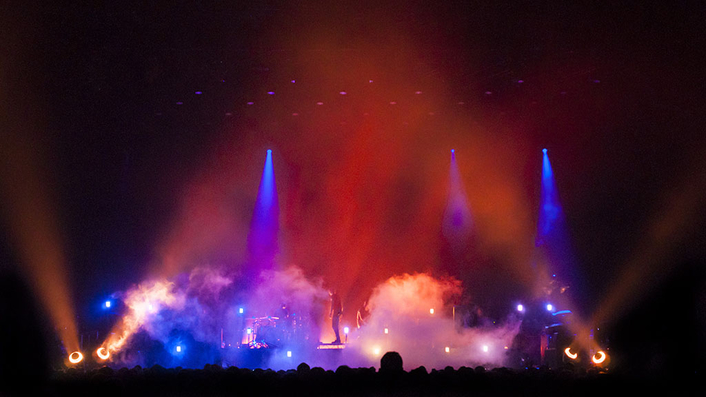 She used the fan and the perimeter ring of LEDs combined to create a moving flame effect during the psychedelic rock-out at the end of ‘Team Mate’, commenting that this looked great together with lead singer Ricky Wilson’s CO2 gun which he brandished with great gusto! This was also supplied by BPM.

Ali used the Cyclone lights as occasional added side-filler if Ricky ventured too far downstage to be lit by the main stage rig, or when he we was jumping on the subs or launching himself into the pit. She also made use of the 8 - 63 degree zoom on the LEDs to light the printed Marley floor for a few songs, so it popped into view on the overhead camera which was integrated into the live camera mix.

All in all … they were pretty useful and versatile!

Rob met the Cyclone’s inventor Scott Warner last year and he has been keen to find a niche application for the units ever since. He absolutely loves the product and is already looking at spec’ing them on an upcoming tour.

The Cyclone is a high-powered LED wash light with an inbuilt DMX-controlled fan, integrating lighting - via a ring of 24 RGBW multichip LEDs - with effects via the fan, providing an inventive tool for creating amazing atmospheric visual effects.  The perimeter ring of LEDs has an 8 - 63 degree zoom and the variable speed and individually-controllable fan in the centre is combined with a snoot to encourage a strong directional central airflow that is adjustable to suit numerous applications and for amalgamating with additional fog and haze sources.