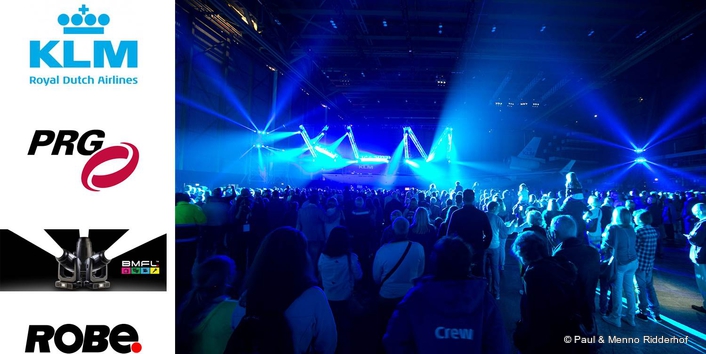 The show’s Creative Director and Lighting Designer was Gerard Maijenburg. With an impressive 35 years as a lighting professional spanning rock ‘n’ roll’, TV and special events under his belt, his high profile clients include the award-winning airline. In addition to, designing the lighting, he co-ordinates the creative and technical production for all KLM’s live events.

KLM commissions a major birthday show every five years. For this one – the precursor of 2019’s centenary - Maijenburg, wanted to use some new, different and outstanding visual aspects for the fast-paced show, which came from two distinctive sources.

The first was projection mapping of an MD-11 jetliner passenger plane parked up right in the middle of the hangar, and also further projections on to the hangar wall behind it, utilizing 25 projectors in total.

The second was using Robe’s latest moving technology to light the spectacle, including 17 x BMFL Spots which were on their first major event in the country, together with 80 x Robe CycFX 8s, 32 x LEDWash 800s and 28 x Robe Pointes.

The CycFX 8s were rigged to a raked trussing frame flown above the plane, spelling out ‘K-L-M’ in giant letters. Doing this with a fixture like the CycFX gave the versatility to be able to texture and colour the letters as well as making them flicker with intensity chases. 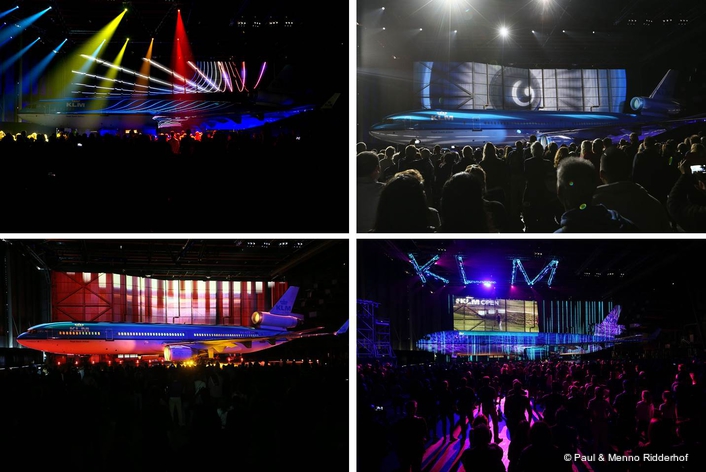 Maijenburg needed really powerful long throw spot fixtures for the project - the hangar is a vast space over 120 metres long by 90 wide - and normally used to service wide-bodied jets, so the BMFL was an absolutely perfect choice!

Thirteen of the BMFL Spots were rigged at specific points on the same trusses as the K-L-M letters and the other four on scaffolding towers around the hangar, all primarily focused on the plane, used for colouring, texturing, huge gobo looks and dramatic punchy lighting, all choreographed beautifully and fluidly with the video for the show.

Using the 70 metre long MD-11 as the centrepiece and an area of hangar wall about 80 metres long behind it, the special movie content produced for the occasion documented the rise and rise of KLM since 1919, combined with fast-moving graphics and effects on the surface of the MD-11. The result was a real 4D spatial experience that WOWed the invited audiences time and time again throughout the two days of shows.

The LEDWash 800s and Pointes were flown on more overhead LX trusses and dotted around the performance area on scaffolding towers, some lighting the audience, and some filling the void under the plane to provide potent low-level washes, and ensure there was plenty of atmosphere for the walk-in state between the 10 shows a day.

Amsterdam based Maijenburg has been using Robe products creatively for some time, and generally likes the brightness and reliability.

He first saw the BMFL Spot in action in the Czech Republic shortly after its launch last month … after which he immediately spec’d them on the show “I think it’s an amazing light!” he declares. He really likes the unique features like the stabilization / movement compensation, which is very helpful if you have fixtures on long trusses, outdoors or in a big venue. 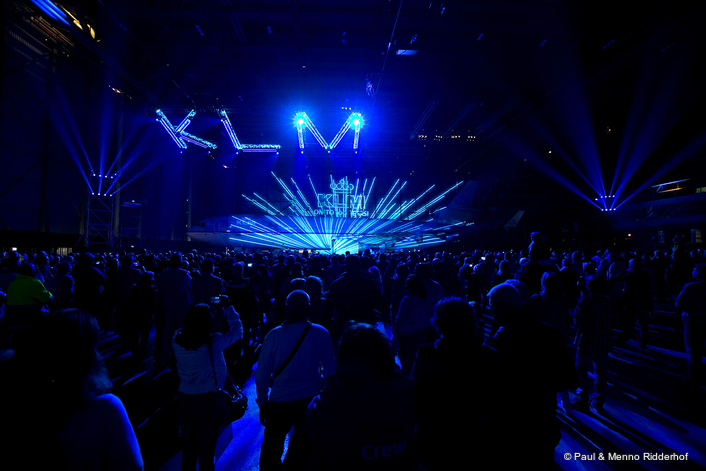 The KLM 95 event lighting equipment was supplied by PRG.  A Road Hog Full Boar console was used to run the lighting, with the lighting programmer and operators supplied by The Unit Showcontrol, co-ordinated of Jeffrey Goes and Daan Oomen who also supplied the d3 system and oversaw the video content creation and its programming. The  Barco projectors were supplied by Faber Audiovisuals and JG Video.