Thomas Riedel presents the new products at IBC2014
"As quickly as the business of broadcasting is evolving, so is Riedel. We are continuing to develop next-generation solutions that leverage the power and convenience of our networked approach to signal transport and routing, and look forward to launching Tango, the next generation matrix intercom, Smartpanel, a multifunctional interface for broadcast deployments and STX-200 to bring Skype into broadcast workflows." — Thomas Riedel, CEO, Riedel Communications

Riedel Communications announced the release of Tango TNG-200, the company’s first fully networked platform based on the AES67 and AVB standards. With its own dedicated intercom application, the platform can be turned into a flexible, cutting-edge solution for a variety of communications scenarios.

“We have always considered the networked approach to signal distribution to be the most desirable option for today’s broadcasters,” said Thomas Riedel, CEO of Riedel Communications. “We have been on the forefront of adoption of standards for several years now, and we are proud to introduce at IBC2014 the world’s first networked and expandable open hardware platform that can also run a powerful intercom application. As an exceptionally flexible platform, Tango not only adapts to users’ specific requirements, but also accommodates current and future standards in broadcast, theater, and live-event environments.”

Riedel’s Tango TNG-200 is an efficient solution equipped with a high-resolution, full-color thin-film-transistor display that ensures perfect readability at all times. The unit’s intuitive front-panel controls simplify the recall of presets and adjustment of audio levels.

Along with powerful processing capabilities, the Tango TNG-200 features two integrated Riedel Digital Partylines, two AES67 and AVB-compatible ports, two Ethernet ports, one option slot, and redundant power supplies. The system is 1.5 RU high and features a shallow mounting depth and low-noise design. It is fully compatible with all of Riedel’s current and legacy intercom panels, including the company’s new RSP-2318 Smartpanel.

Riedel’s powerful intercom application, TNG-200, turns the Tango platform into an efficient intercom system that users can tailor according to their needs, including choice of matrix size starting with 40 x 80. The asymmetric 40 x 80 matrix size is another Riedel innovation allowing for standard premium-quality stereo audio connection to Riedel panels.

Riedel’s new Pulse software enables configuration of the Tango TNG-200 platform. The software allows users to access, set up, and control any aspect and function of the platform and its installed applications, including Riedel’s intercom application. Programming is easy, thanks to convenient drag-and-drop functionality and 3D views.

Riedel Communications also announced the release of the new RSP-2318 Smartpanel. As the world’s first Smartpanel designed to serve as a powerful multifunctional user interface, the RSP-2318 offers features and capabilities that will enrich the user experience and change the way broadcasters and AV professionals communicate.

“Our panels have evolved over the years to incorporate cutting-edge designs with features such as high-resolution OLED displays and support for colors and languages,” said Thomas Riedel. “Our Smartpanel represents the logical next step in communications, as it gives broadcasters a universal panel that is capable of performing multiple functions across multiple applications.” 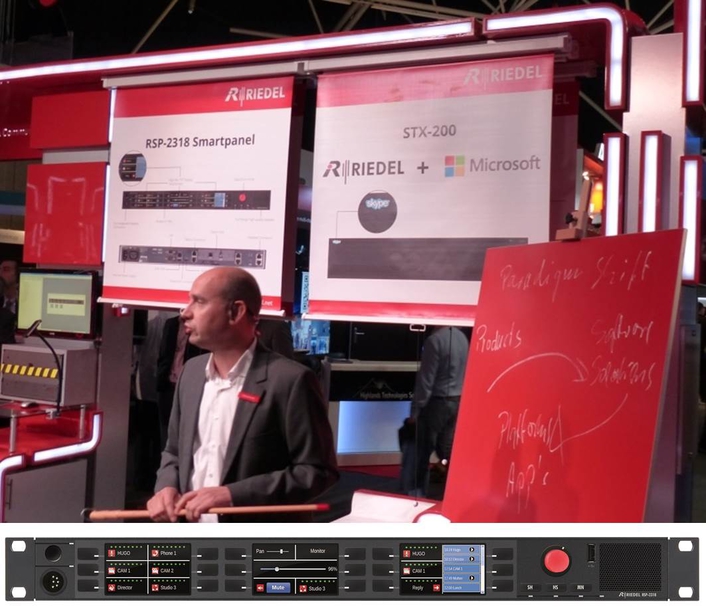 The unique feature set of the RSP-2318 Smartpanel includes three high-resolution, sunlight-readable, multitouch color displays; premium-quality stereo audio; a multilingual character set; and 18 keys in just 1 RU. These features make Riedel’s new Smartpanel a powerful user interface that can be further expanded through the use of apps. Riedel’s first app for the RSP-2318 turns the Smartpanel into an innovative and smart intercom panel.

Developed to address communications applications including intercom, the RSP-2318 Smartpanel provides an intuitive and flexible user interface that can handle multiple tasks.

“In the same way that smartphones have far surpassed traditional mobile phones in enriching the user experience, the Riedel RSP-2318 Smartpanel will bring broadcast workflows to a whole new level,” Riedel said.

The RSP-2318 Smartpanel can be integrated into any existing Riedel installation. Support for new and legacy systems ensures smooth interoperability among all Riedel intercom systems, including the Artist, Tango, and Performer products.

Finally Riedel Communications announced the release of the STX-200 broadcast-grade professional interface, which brings any Skype® user worldwide into the professional broadcast environment. The new Riedel product meets broadcasters’ increasing need for a reliable single-box solution that enables them to engage both reporters and viewers in live programming.

Licensed by Microsoft®, the STX-200 is more than a stand-alone broadcast-grade solution that leverages Skype to bring live content directly from reporters to the on-air production. Riedel’s STX-200 is also a perfect integration of Skype into Riedel’s intercom solutions providing even more powerful, flexible applications and workflows. The unit offers broadcast-quality HD-SDI and balanced XLR audio I/Os and is packaged with professional Microsoft Skype TX software. The solution’s broad feature set includes remote management and monitoring of Skype calls. 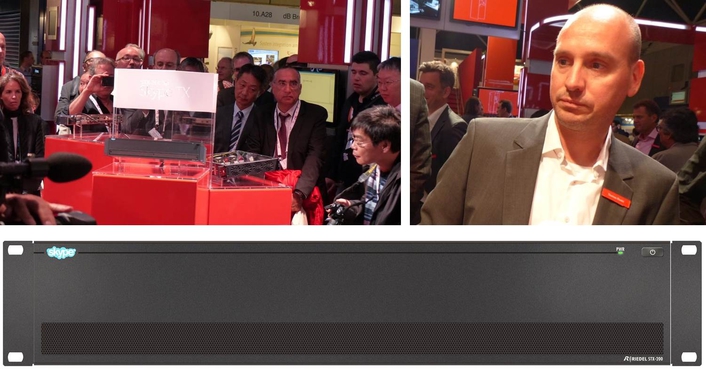 “We are very proud of the result of this collaboration with Microsoft,” said Thomas Riedel. “By enabling use of a tremendous volume of new content, the STX-200 will change the way broadcasters interact and engage with their viewers. Broadcasters now have live access to quality video from the more than 300 million regular Skype users around the world, and the STX-200 equips them to take the best of this content to engage the imaginations and minds of their audiences.”

The STX-200 offers professional video interfaces including an SDI (SD/HD) input and SDI (SD/HD) output with a sync input. The unit’s broadcast-grade audio interfaces include a two-channel balanced analog audio XLR input and output, as well as SDI embedded audio. Within a robust housing designed for the rigors of broadcast and production, the STX-200 features a Gigabit Ethernet connection, a user-interface connection via HDMI, USB ports for accessories, and GPIs.