Riedel MediorNet Compact in the Warsaw Stadium
At this year’s UEFA EURO football championships in Poland and Ukraine the host broadcaster as well as a lot of the rental companies and rights holding broadcasters were working with communication equipment from Riedel. Riedel has delivered various solutions out of its portfolio of Artist digital intercom matrixes, TETRA RF products, RockNet audio networks and MediorNet fiber networks.

In all of the eight stadiums the TV compound, the commentator cabins and the FOH sound positions have been connected via Riedel network products. To secure the distribution of video, audio and intercom the host broadcaster had installed three MediorNet Compact Pro mainframes in each stadium. Riedel’s fiber network carried the lateral TV program as well as the audio and MADI signals. Intercom was integrated via AES. The installation of the Riedel network reduced the cost significantly without crucifying the flexibility.

More than 3,500 TETRA radios were in use in Poland and the Ukraine. This allowed the use of digital terrestrial trunked radio systems in all of the eight stadiums and at the IBC in Warsaw. All TETRA base stations were combined into one TETRA network. This network was monitored and maintained from one central service point. However Riedel service engineers were located in all of the eight stadiums to support the users.

The Filmmaster Group, the producer of the opening and closing ceremony, was using a combination of the Performer Digital Partyline and Riedel RiFaces enabling wired and wireless communication with one system. 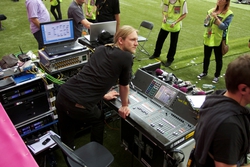 Provider of the FOH equipment in the eight stadiums was Neumann&Müller. The company was using the Riedel RockNet products to network their installations. About 20 RockNet audio-input and output modules together with the interface boards for the Yamaha mixing consoles were used. Also nine Artist CCP-1116 commentator modules for the stadium announcers were delivered by Riedel. For the distribution of the signals Neumann&Müller was also using the MediorNet Infrastructure. 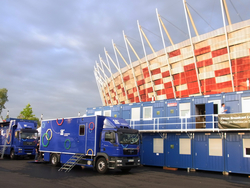 In addition to the systems which were installed for the UEFA EURO 2012 only, a lot of the rights holding broadcasters were using Riedel intercom systems  not only in the IBC but also in their HD OBVans, e.g ARD/ZDF and ORF to only name a few.