The Design Zentrum Nordrhein-Westfalen in Essen, Germany, has been recognising design innovation since 1955, this was rebranded the Red Dot Award: Product Design at the start of the new millennium. Function, environmental impact and the degree of innovation are just some of the evaluation criteria.

As the years ticked by it has evolved into a leading international product award: for 2014 no less than four hundred international experts discussed and evaluated 4815 submissions from 53 countries. The jury only bestows the award on the design that captures the imagination through the standard of workmanship and sheer innovation. "If nothing else, this is reflected by the actual number of designs that win the Red Dot Award," states Professor Dr Peter Zec, Initiator and CEO of Red Dot, "compared to other international design competitions, it's far fewer." 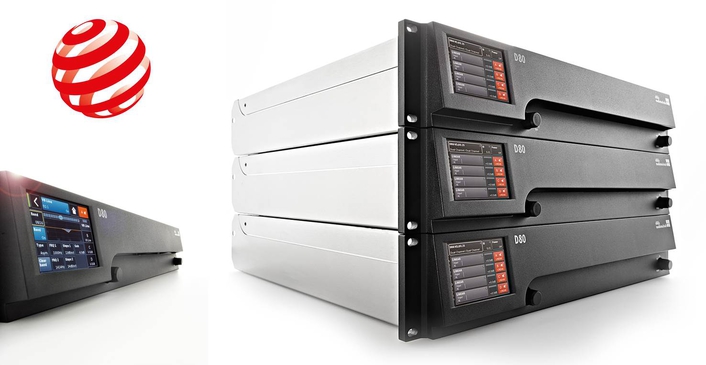 This year it was the design of the D80 amplifier that won over the forty strong jury of experts, to achieve winner status. Red Dot describe the D80 as a four channel Class D amplifier with digital signal processing providing loudspeaker specific configurations, user-definable equalisation and delay functions combined with comprehensive management and protection functionality. The TFT colour display allows for quick access to all settings, while data input is managed via the rotary encoder on the front panel. For easier operation, the front panel with integrated display is tilted upwards. According to the jury, the high performance D80 amplifier won the award for its outstanding user-friendliness, "All functions can easily be set via the touchscreen and the rotary knob."

From the very first concept board, the d&b development team had extraordinary partners at their side: BTism Mediendesign in Köln and Botta-Design from Taunusstein, west of Frankfurt. Drawing on their partners' input and the results of their own research, the d&b design team, Christoph Kluck, responsible for software, Fritz W. Wurster, responsible for design, and Claus Renftle, responsible for electronics, ensured every single detail was just the way it should be.

An exhibition of award winners opened on 7th July 2014 as part of the traditional Red Dot Gala in the Red Dot Design Museum Essen. The award winning D80 will be on display to the general public for four weeks before it moves to the permanent exhibition at the museum.