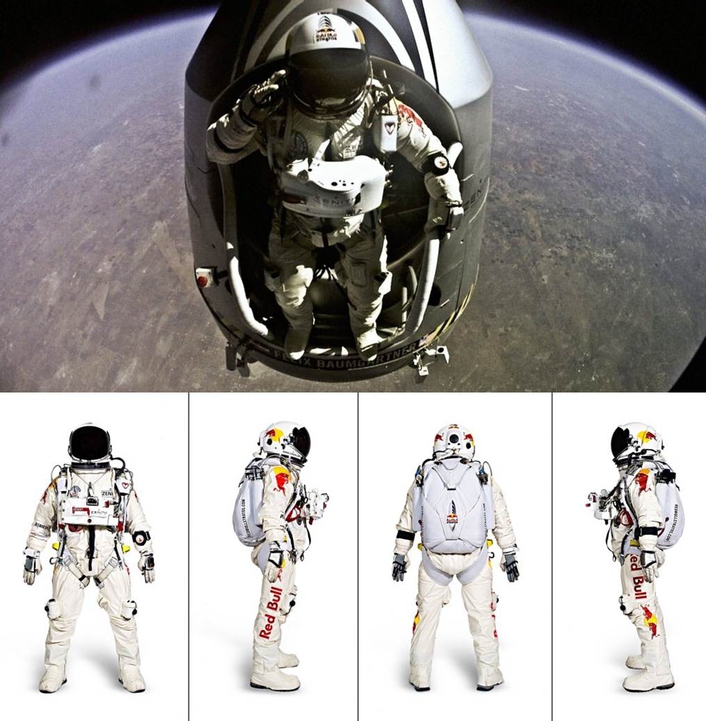 .
Felix Baumgartner’s supersonic freefall from the edge of space on October 14, 2012, reached an even faster speed than originally estimated: Mach 1.25. The statistic was just part of the news shared in a report detailing the results of a three-month-long analysis of mission data conducted by the Red Bull Stratos science team, released yesterday. (Tuesday, February 5, 2013)

The wide-ranging science findings, including the first physiologic data ever captured from a human freefalling faster than the speed of sound, also led to some revisions in the initial figures from the jump, which collected knowledge for future aerospace travel while breaking numerous records. Baumgartner’s record-breaking maximum vertical speed was revised upwards to 1,357.6 kmh / 843.6 mph / Mach 1.25 from an initial estimate of 1,342.8 kmh/ 833.9 mph/ Mach 1.24. With the help of additional data recorder analysis, the jump altitude was revised slightly down to 38,969.4 m / 127,852.4 ft from the previous estimate of 39,045 m/ 128,100 feet.

The most important finding of the mission’s analysis was already abundantly evident to the countless millions of viewers who watched the leap live around the world. The Austrian adventurer’s freefall demonstrated that, with the right equipment and proper training, a human being can safely accelerate through the sound barrier. That is a vital breakthrough for the aerospace industry as it looks for answers to the questions of crew and passenger escape in emergency situations, especially with commercial space travel on the horizon.

“Together we proved that a human in freefall can break the speed of sound returning from near space, going through a transonic phase and landing safely on the ground,” said Dr. Jonathan Clark, Red Bull Stratos Medical Director. “That was a big part of the program, and monitoring the mission was a meaningful event in aerospace medicine and physiology.”

Red Bull Stratos was a historic mission to the edge of space in which Baumgartner, a professional BASE jumper, fulfilled a lifelong dream: jumping from a capsule that had ascended 39 kilometers / 24 miles above Earth, attached to a helium balloon. He became the first human to break the sound barrier in freefall and established numerous additional records in the process. From its inception, the mission was envisioned as a flight test program for medical and scientific advancement in human flight.

The release of findings from the mission is the culmination of five years of active flight test program development, and topics range from technical breakthroughs to medicine and meteorology. Some the most eagerly awaited information was Baumgartner’s preliminary physiologic data, which includes heart and respiratory rate at key points during the ascent and record-breaking freefall back to earth.

Baumgartner’s physiologic monitoring provided the team with more than 100 million data points – including the first physiologic data ever gathered from a human traveling at supersonic velocity. The newly released data not only includes his heart and respiratory rate, but also indicates the forces he encountered at milestones throughout the mission. 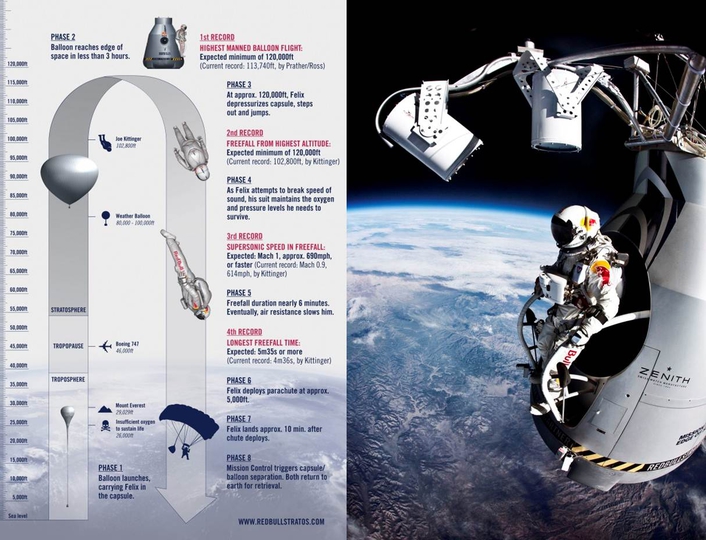 Baumgartner’s heartbeat reached a maximum of 185 beats per minute (bpm) when he exited the capsule and ranged from 155 to 175 bpm during freefall. Baumgartner, whose heartbeat during the pre-launch oxygen pre-breathe period was 40 to 100 bpm, had a heartbeat of 60 to 100 bpm during the ascent and 169 bpm when he hit Mach. 1.25 on the way back to earth, 155 to 180 during the parachute descent, 163 upon landing and 100 as the recovery helicopter flew him back to Mission Control. His respiratory rate hit a maximum of 30 to 43 breaths per minute during the freefall.

Baumgartner experienced 25.2 seconds of absolute weightlessness during the initial stage of his freefall. Subsequently, he entered a period of turning and spinning that reached a maximum rate of 60 revolutions per minute and put the 43-year-old in a “flat spin” position for about 13 seconds He was able to stabilize his trajectory using his skydiving skills. All physiologic data were well within anticipated parameters, never exceeding safety margins. (For example, the G meter worn on Baumgartner’s wrist never experienced the 6 continuous seconds at 3.5 G that would have triggered deployment of his stabilization parachute; in fact the area of most concern, Baumgartner’s cranial region, remained under 2 G for the duration of his spin.)

Baumgartner described the freefall sensation as he accelerated to and through the sound barrier: “It feels like you are floating into space, and then you pick up speed very fast – but you don’t feel the air because the air density is so low. For almost 35 seconds I couldn’t sense the air around me because basically there was none. That kind of helpless feeling is annoying as a professional skydiver. And then when you finally enter a thicker air layer you have to keep yourself completely symmetrical because otherwise you start spinning, which is what happened to me.” 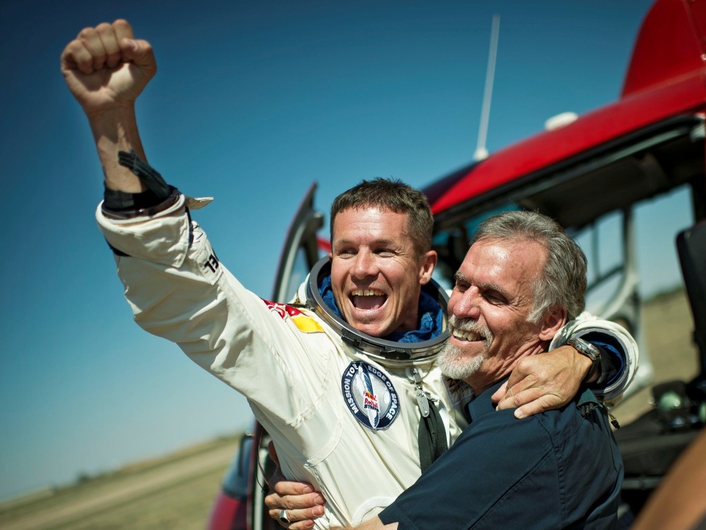 Space Suit and Parachute
The mission achieved many science innovation milestones such as: the development and validation of pressure suit and personal parachute rig innovations; the development of new medical treatment protocols, including a protocol for the condition of ebullism anticipated to become the new standard of care; and the introduction of a “reefed” parachute system to the task of high-altitude payload recovery, offering potential benefits for both passengers and cargo.

Baumgartner’s space suit was custom designed to provide the mobility necessary for controlled freefall, as well as modifications to enhance visual acuity, GPS tracking and thermal protection. “He could have gone to the moon in that suit, but yet he was also able to fall in a head-down position and be comfortable inside it,” said Mike Todd, the life support engineer from Sage Cheshire Aerospace who personally dressed Baumgartner for every jump.

No personal parachute rig had ever been developed for supersonic freefall. The ingenious system created for Baumgartner included a variety of innovations ranging from a specially designed handle configuration to a unique altimeter designed for the exceptionally long descent. But the biggest innovation was a drogue (stabilization) system and G meter triggering device designed to stabilize Baumgartner only if his spins reached dangerous levels, without deploying if (as it turned out) he was able to control spinning with his own skills.

New medical treatment protocols were developed. Above approximately 19,200 meters / 63,000 feet in altitude, liquid water vaporizes. Thus blood spontaneously boils, a condition called ebullism that can lead to serious consequences, especially in the lungs. As a contingency against unforeseen exposure to the stratospheric environment, the Red Bull Stratos medical team developed a treatment protocol that for the first time indicates use of a special type of ventilator in the field. "We've developed a clinical practice standard that will be one of the major outcomes of this program," said Dr. Jonathan Clark, Red Bull Stratos medical director and a six-time Space Shuttle crew surgeon. "Red Bull Stratos is already producing tangible results that will allow potential space travelers who are in this danger zone to have a fighting chance if they get exposed to vacuum."

Also new was the introduction of a "reefed" parachute system. Typically with high-altitude payloads, a recovery parachute deploys fully as soon as the payload releases from the balloon. The Red Bull Stratos capsule parachute, however, was "reefed"; meaning that restraining fabric around its circumference held the opening to just under 5 m /17 ft in diameter for the initial part of the descent, allowing the capsule to fall quickly (up to nearly 560 kmh / 350 mph) before full parachute deployment. The result was a one-third reduction in drifting (resulting in better accuracy in landing zone prediction) and an estimated two-thirds reduction of descent time. Don Day, the mission's meteorologist, stated, "The Red Bull Stratos program will set a new standard in stratospheric lighter-than-air flights and payload.

Records Update
Following weeks of post-mission analysis, Brian Utley, Official Observer for the Contest and Records Board of the United States' National Aeronautic Association, was able to provide updates to the World Record figures currently under review for confirmation by the Fédération Aéronautique Internationale governing body (a process that typically requires an extended timeframe):

Utley pointed out that the Maximum Vertical Speed category is a new one for the FAI, established especially to accommodate the groundbreaking nature of the Red Bull Stratos program.

Research Continues
The Red Bull Stratos team continues to analyze deeper layers of data, with results to be shared in venues such as journal publications and conferences. But the true legacy of the mission will become apparent as new projects and programs take inspiration from the information provided by Baumgartner’s mission to make pioneering efforts of their own.

“The experts who contributed to the mission are extraordinary – it really takes the best people in the world to successfully complete a project like Red Bull Stratos,” Baumgartner said. “They safeguarded my life, and in doing so, they broke boundaries in their own fields just as surely as I broke the sound barrier.”

He added: “I can think of no greater honor for myself – or for this team – than to know that people informed by our mission will use the data to take aerospace safety to the next level; or to spark children’s interest in science; or simply as inspiration to pursue their own goals. I look forward to seeing what the realization of their dreams holds for all of us. “