.
The flexibility of a Roland M-200i live digital mixing console configured with the Roland S-1608 Digital Snake proved to be the perfect solution for Recks Audio for an unusual, one off outside broadcast from a lighthouse.  Working for national radio station Today FM, the Clara based professional sound company were tasked with broadcasting a live, 3 hour radio show from the Hook Head lighthouse in Co. Wexford - the oldest intact operational lighthouse in the world. The broadcast included the presenter abseiling down the lighthouse (whilst presenting!) and a live band performing inside the lighthouse - as well as the production of the daily radio show itself.

With each element posing its own audio challenges, this outside broadcast required an audio setup with a small footprint yet with enough inputs and outputs to handle both sends and returns for the microphones, band and broadcast. The combination of the compact 32 channel M-200i and S-1608 connected via Cat5 cable over two floors satisfied the requirements with the iPad controllable M-200i proving particularly useful for sound-checking the band in the unusual shape performance room. 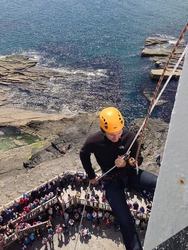 The first 2 ½ hours were broadcast from inside the lighthouse with the last 20 minutes from the top of the lighthouse culminating with the presenter continuing to present the show as he abseiled down.  The Roland M-200i was positioned half way up the lighthouse with the S-1608 Digital Snake at the very top with the unobtrusive Cat5 cable running down the 192 steps in between.  The radio mic and IEM (In Ear Monitors) used by the abseiling presenter were connected to the S-1608 and the programme itself was broadcast using the M-200i.  The M-200i was also used for mixing and broadcast of the live band.

Despite its compact size, the M-200i ensures a comfortable 32ch input mix capacity with 16 mic/line inputs, 8 line inputs, 2 main outputs and 10 assignable outputs. Connecting a Digital Snake, such as the S-1608, to the REAC port expands the number of inputs and outputs. The output of the M-200i has the full specifications of Main (LR)/8AUX/4Matrix, supporting many mixing applications. Any of the built-in 24 analog inputs, the 40x40 channels on the REAC port, the effect outputs, and USB memory recorder can be assigned to the 32 channels.

With the S-1608 Digital Snake system, the source audio can be digitally split using the S-4000D or any standard Ethernet switch. These loss-less digital splits can be routed over CAT5 cable to a monitoring console (in this case the M-200i) or a broadcast truck for recording.  Controlling the M-200i with an iPad enables sound checks to be performed remotely from any point in the venue within a wireless network. At the same time, all operations can still be performed at the console using the built-in display and dedicated knobs and buttons. 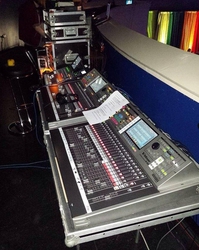 Recks Audio were also contracted recently by Riverside TV, operating their Roland M-300 live digital console and the Roland R-1000 standalone recorder for outside broadcast for television.  The M-300 forms part of the Riverside TV ‘ROB1’ state of the art High Definition five camera Outside Broadcast Unit and KA Band Satellite Uplink. This purpose built facility features five HD fibre camera channels with full camera control and power along the fibre which can handle multi-track audio for live mix to broadcast and recording for later post production if needed.

The Roland M-400 live mixing console and the M-200i were also chosen by Recks Audio – again for client Today FM – for the broadcast of an intimate album launch by Imelda May at Bewleys Coffee House in Dublin.  The M-400’s were used together for the live band performance at the venue, one for FOH and one for the broadcast mix.  The Roland S-4000 Digital Snake was used to split the audio signal between the two desks. The M-200i was used in this instance to handle the link and returns back to the studio.

All of the Roland products were supplied to Recks Audio by Professional Audio Ltd in Dublin.