.
Broadcast technology provider Reality Check Systems (RCS) recently delivered custom interactive touchscreen applications to beIN SPORTS channels around the world. Additionally, the RCS team helped the network unite channels in Doha, Jakarta, Miami and Paris under the beIN brand as part of a project that required the creation of 400 graphic elements and a cloud-based database for populating the graphics in each location.

"RCS' solutions have simplified the way our producers and editorial teams work, and have given us a more consistent aesthetic across beIN channels," shared beIN SPORTS Head of Brand Mohammed Al Battat. "Their team was absolutely brilliant to work with, and we're excited to continue exploring the benefits that their innovations enable."

RCS first created automated interactive touchscreen applications for four separate beIN studios in two different continents and in English and Arabic language versions. Culling a real-time feed of Opta Sports data and rendering with the Vizrt Engine, each system allows on-air talent to quickly and easily find, manipulate and compare real-time information on any of the touchscreens. They can also prepare or review team formations and look at standings, player and team stats and more. Originally designed for beIN's English Premier League match broadcasts, the technology covers all major leagues in Europe as well as the Champions League and Europa League competitions. RCS is also currently rearchitecting the systems for future beIN coverage of F1, Rugby, NFL, Boxing and NBA games.

When beIN began plans for a rebrand, the network enlisted the expertise of RCS once again to design 400 integrated sports graphics that would air in four languages: English, French, Spanish and Arabic. To streamline the output of these graphics on air, RCS built a turnkey cloud-based SQL database that ingests Opta Sports data in real-time via an Internet connection. The database then populates a graphics template and leverages a custom software script to feed the information directly to operators' workstations. 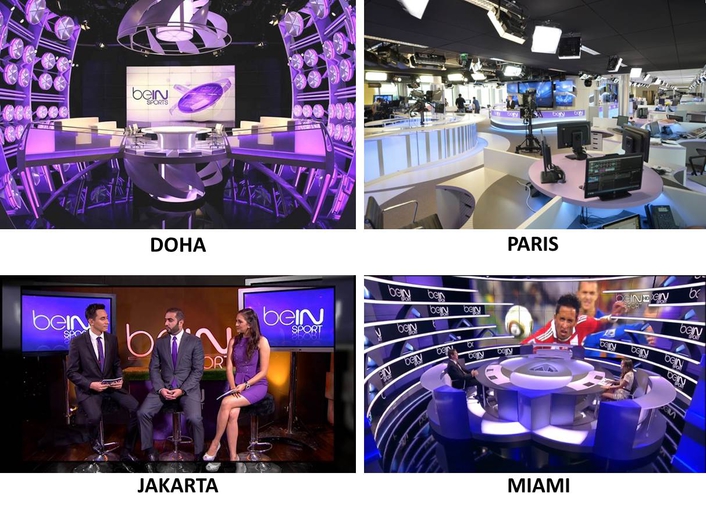 "We strive to deliver solutions that lay a solid technological infrastructure for our clients to build upon, and we're proud of the work we've accomplished for beIN," said Mike Ward, European Managing Director, Reality Check Systems. "Any project of this size and scope requires a huge effort from both our team and the client. beIN had a very clear vision and a dedicated team who were fully focused on this project. From inception through to delivery, their hands-on interaction with our team helped ensure that the project was delivered successfully; they are an incredible company with huge ambitions."

beIN's Paris team initiated the design of the new graphics for the rebrand, and RCS collaborated closely with the team to evolve those designs into a modern, dynamic and consistent aesthetic for all on air graphics across four regions, multiple channels and countless sports. RCS' team then built a custom software script to generate the graphics in English, Arabic and French, change the colors of the graphics and dictate how each graphic would read on screen - left to right and vice versa. Cake Studios, a longtime RCS partner, helped design promo graphics package elements for the project.