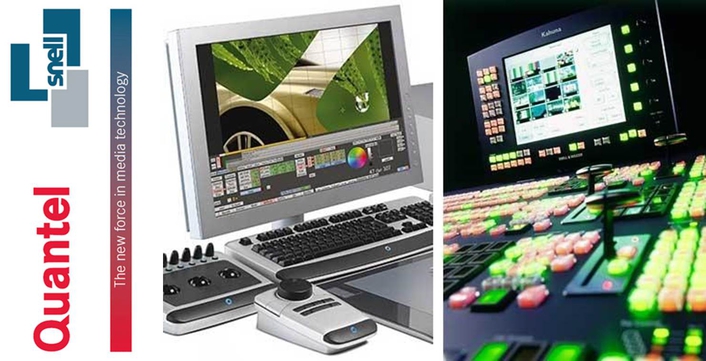 Deal Unites Two Broadcast and Media Tech Developers
Postproduction developer Quantel has acquired Snell, which creates technology for TV live  production and the management and distribution of web content. The combined company will have revenue of more than $170 million and offices in 16 locations around the globe, making it one of the larger vendors in the broadcast industry.

The enlarged company will be called Quantel and headquartered in Newbury UK, Quantel’s current HQ. According to an FAQ issued by the company, all existing products from Snell and Quantel will continue, and the Snell brand will remain.

Current Snell CEO Simon Derry will exit the business after acting helping to support the integration of the two companies for several months.

UK-based Companies Have Little Product Overlap
Quantel and Snell are both based in the UK, and have a significant presence in many international markets.  Both companies are viewed as high-end players in the market, with good reputations for quality, reliability, and customer service.

Although the two companies have many common customers, they have virtually no overlapping product lines. Quantel focuses on post-production graphics and color grading systems, as well as enterprise-class networked editing systems, and media asset management.  Snell is known for production switchers, signal processing gear, playout automation, and channel-in-a-box products.

Both companies have UK-based R&D and manufacturing facilities, which will likely be rationalized over the course of time, resulting in significant cost savings for the combined entity. “We will be creating a new world-class facility at the company headquarters in Newbury to produce the complete Quantel and Snell product range and we look forward to the new ideas generated when the two R&D teams start to interact,” said Quantel CEO Ray Cross.

Common Parent Combines Broadcast Holdings
The combination of Quantel and Snell was long-rumored in the industry, since the two companies already had a common parent, Lloyds Development Capital (LDC), the investment arm of Lloyds Bank.

LDC has held a majority stake in both Quantel and Snell for a number of years, so a primary driver for the deal was likely the internal consolidation of LDC’s long-time holdings in the broadcast technology space, creating a larger, more efficient business, with greater operating leverage.

The complementary nature of the respective Quantel and Snell product portfolios should allow the enlarged company to continue serving the needs of customers, while realizing significant cost savings through the combination of R&D and manufacturing facilities, trade show booths, regional offices, etc.

This is similar to the approach outlined last month when Belden announced it will purchase Grass Valley for $220 million, and combined it with Miranda Technologies, which it already owns.  In 2012, Belden acquired Miranda for approximately $350 million.

Like Quantel and Snell, the combined Miranda and Grass Valley have limited product overlap and many common customers. Belden’s management has said it believes significant cost savings can be achieved by rationalizing duplicate functions within the combined company.

In 2009, LDC created Snell when it funded the £72 million merger of Snell & Wilcox and Pro-Bel, in a deal supported by a £25 million package of senior debt and working capital facilities provided by The Royal Bank of Scotland and HSBC. After the merger, the combined company was renamed Snell.

Prior to its merger with Pro-Bel, Snell & Wilcox was owned by Advent Ventures who had funded its £22 million management buy-out in 2002.

Both Quantel and Snell are private companies, so their individual revenue figures are not disclosed publicly.

A report published immediately after the merger of Pro-Bel and Snell & Wilcox in 2009  said Snell had revenue £80m and employed 450 staff; and in 2011 Snell CEO Simon Derry said in an interview that the company’s revenue was “greater than $130 million.”

According to its website, Quantel “employs around 300 people, and operates sales and support subsidiaries in the USA, Canada, Latin America, Hong Kong, China, Japan, Korea, Australia and throughout mainland Europe.”

About Snell
Snell creates unique and Emmy award-winning technologies to help broadcasters, content owners and content providers worldwide to process and manage their valuable media content. Recognised as global leaders in image processing, Snell applies over 40 years of media expertise to help customers transition to IT, IP, cloud, 4K and UHD workflows and enable them to monetize and deliver their media assets to multiple distribution platforms. Through its core divisions - TV Everywhere and Live TV - Snell brings tangible business benefits to its customers across the production value chain, whether a national broadcaster or an OTT provider. Headquartered in the UK, Snell serves more than 2000 broadcasters, post facilities and global media companies in more than 100 countries.