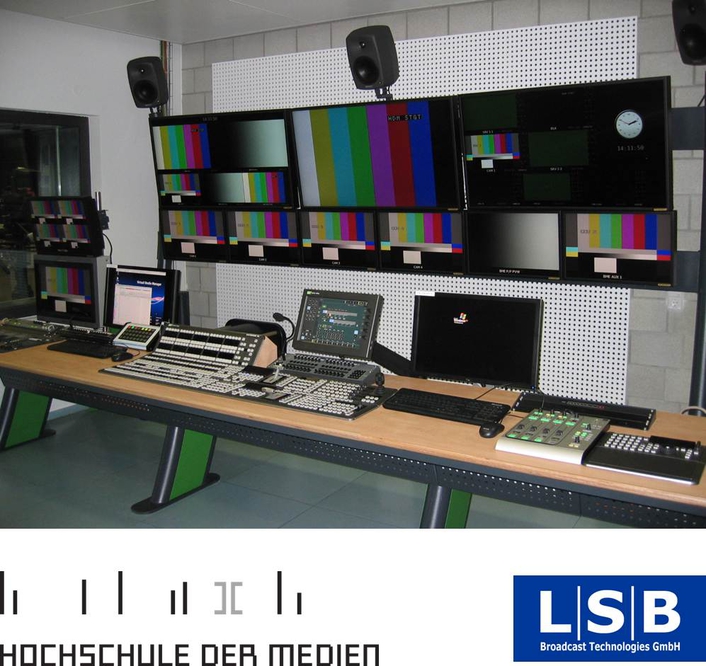 Control System of L-S-B put into Operation in the HD Studio of Stuttgart Media University
From now on media students in Stuttgart (Germany) will receive an especially practical insight into the audio and video control technology: The Stuttgart Media University (HdM) decided on the VSM control system manufactured by L-S-B Broadcast Technologies GmbH for its testing laboratory studio. Hereby one of the most high-performing and flexible superior control systems is available for the students of the audio-visual media study course. At the same time the studio has been upgraded for future HD productions with the commissioning of the Virtual Studio Manager (VSM). In cooperation with the Stuttgart-based system integrator Wireworx, L-S-B was instructed to provide a VSM control system to the HdM.

With the installation of the VSM control system the Media University has simultaneously remoulded its HD TV studio. The system, by which the students of the HdM can experience the praxis of audio and video broadcast control, consists of a server with a VSM software licence, four control panels and a serial interface. The VSM controls the HD video mixer GVG Kayak with Kayenne XL Panel Controller, the Lawo audio desk mc²56 with 5.1 surround monitoring possibility, the digital video router Evertz Xenon, Mirada KX multiviewers and Penta displays. In addition the VSM control system provides a system-wide Tally and GPI control. Further VSM features such as Pseudo Devices make it possible to bundle signals, for example for the realisation of Audio-follow-Video functions. Storage Groups allow storing and reloading of complete production setups.

VSM at the Stuttgart Media University

There are around 3,400 prospective media professionals studying the fields of Print and Media Technology, Electronic Media as well as Information and Communication at two sites of the Stuttgart Media University. At the HdM, TV production has been a supporting pillar in the curriculum since the start of the audio-visual media study course more than 30 years ago: Back then the students worked in photography, film and video studios; today it is all about the high-definition TV future. 240 studio square metres are available for the digital production of live shows, magazines or for concert recordings. The sound for the moving images is created in three digital audio studios. “When it came to choosing the system components for our HD TV studio the relevance in the broadcast market was an important criterion,” explains Axel Hartz, Professor for TV production technology at the HdM. “We make realistic production requirements for our students in a complex TV studio operation a top priority.”

L-S-B Broadcast Technologies GmbH is a global leader in advanced mobile audio and video broadcast controls. The core product of the company, which is based in Bingen in Germany, is the Virtual Studio Manager (VSM), an IP-based overall control system. Since the VSM is able to control broadcast devices from any manufacturer, it provides a flexible and powerful one-stop solution that meets all broadcasting requirements. Together with the configuration software vsmStudio, the VSM makes a variety of hardware and software front-ends available for an unlimited number of users. This enables complete studios, master control rooms and mobile trucks to be equipped and managed with one single system. Customers of L-S-B include the NDR, proSieben Sat. 1, Deutsche Telekom, T-Systems, N24, n-tv, and numerous other radio and TV stations all over the world. Founded in 2003, the mid-sized company has access to an ideally positioned global sales network. A staff of 20 people responsible for management, implementing projects, service, training, software and hardware development and production are employed at the company’s headquarters in Bingen in the German state of Rhineland-Palatinate. Additional training rooms and the company administration are situated at the new Training Centre in Wiesbaden.