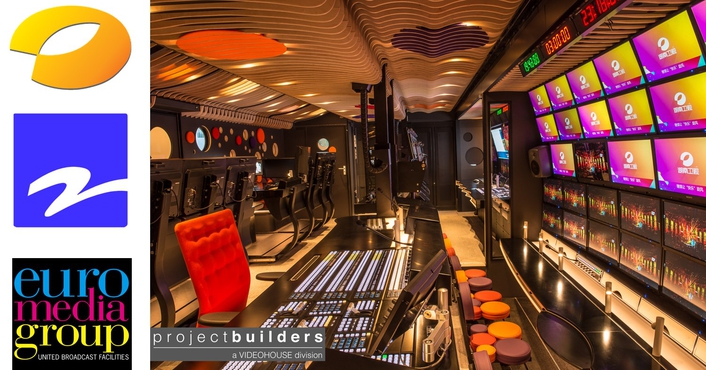 In the presence of the Belgian and Chinese ambassador and together with Chinese dignitaries, the Belgian prime minister Charles Michel signed a number of contracts between Chinese and Belgian companies in the Belgian Embassy in Bejing on 30 October. The Vilvoorde company Project Builders , a Videohouse division, will be one of them. They won – by participating in public tenders – 3 contracts for the Chinese TV, amounting to a total turnover of 35 million Euro. Project Builders  was selected by the Chinese, based on their unique concept  and extensive expertise in terms of audio-visual solutions.

The Chinese Hunan TV (Hunan province) had already worked with Project Builders before. In 2015 they appointed the Vilvoorde company to build an outside broadcast coach according to European quality standards. The result was unanimously praised by Hunan TV. Since then, the belief in Project builders could not be bigger. Not surprisingly they were also notified of a new international tender for the design and development of 2 TV studios, backstage areas, production facilities areas and VIP area for the entire studio complex.  Eventually, Project builders won the contract and they can now start designing the 20,000 m2 complex. Never before a Belgian company has won such a vast media contract in. Project builders will develop this project – worth 20 million Euro – together with local Chinese partners.

Next to Hunan TV, also Zhejiang TV (Hangzou province) chose for Project builders following a public tender. The company will be designing and following up on the construction of an outside broadcast truck and audio truck, with a total value of 15 million Euro. The OB video truck is a real technological feat: it will be the largest OB video truck ever based on IP technology, equipped with 32 cameras .

But also the audio truck is a true masterpiece: it will become the world’s largest and best soundproof mobile audio studio. The truck will boast the highest soundproof standards and the best acoustic performances. The truck consists of a large audio control room with 9.1 audio system, a second control room with 5.1 monitoring and a relax area for producers and musicians. Project builders will be responsible for the entire concept, the design, the interior, air conditioning and acoustics.

Thanks to the 3 new contracts Project builders will gain a larger foothold on the Chinese market. Walter Vanderstukken, Manager International Media Services at Videohouse, adds: “For over 30 years we are renowned for our tailor-made audio-visual solutions and our national and international clients praise us because we truly understand their needs and are capable of providing an adequate answer. As part of Euro Media Group – with offices in 7 European countries – we are already very strong in the European market, and we hope that thanks to these 3 new contracts we will get even more access to the Chinese market. After all, also the Chinese begin to understand that our quality and knowhow are unique and incomparable. Hence, we are utterly proud that we will be signing these new contracts in the presence of the Belgian prime minister and the Belgian and Chinese ambassador.”